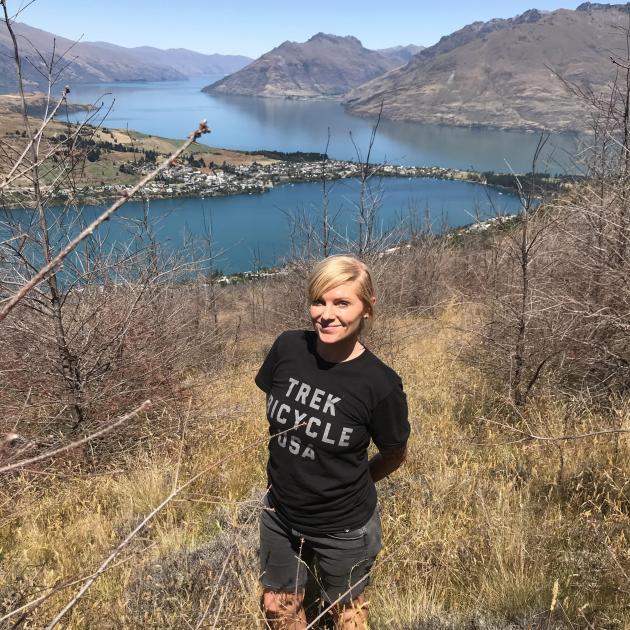 Wakatipu Beech Seedling Project manager Hilary Lennox, of Ahika Consulting Ltd, on site above the lake. Photo: Supplied
As our climate and ecological crises deepen, attention has been turning to viable and efficient ways to restore natural ecosystems. Maureen Howard finds out what is being learned by volunteers restoring native beech forest to the slopes of the Wakatipu Basin.

The massive masting of beech seeds last year, which triggered an explosion of mice, rats and mustelids, also attracted a dedicated group of volunteers.

These volunteers are part of the Wakatipu Beech Seeding Project, that aims to find large-scale, low-cost ways to bring back beech forest to the pine-infested slopes of the Wakatipu Basin, close to Queenstown.

The project is a community collaboration between the Wakatipu Wilding Conifer Control Group and the Wakatipu Reforestation Trust who have enlisted expertise from the University of Otago, Scion and Ahika, a Dunedin-based environmental consultancy firm where the beech seeding project’s manager, Hilary Lennox, has her base.

Last autumn was a big year, Lennox says. She and her group of trained volunteers descended on beech forests to collect ripe beech seed by shaking branches with shepherd crooks while tarpaulins held under the branches collected the seed.

"You have to do it when the seed is ripe, otherwise you’re just shaking and you get a whole load of leaves and possum poo!"

"There’s a desire to try to skip ecological succession and just go straight to the favourite species. But unfortunately, sometimes you are fighting a losing battle there and you really need something that’s going to help restore the soil conditions to be appropriate for your ideal species first," she says.

Many of the conditions that were present 600 years ago when beech forest covered the slopes of the Wakatipu Basin are gone, she says.

Back at her kitchen table, Lennox and a volunteer carefully sorted and stored the collected seeds, to sow as quickly as possible.

"Collecting native seed can be really hard — we don’t want to waste it."

Seed has now been broadcast by hand on eight sites, all on private land, where landowners have previously sprayed the area for wilding pine. Still standing, the dead pine are a grim reminder of ecological mismanagement. 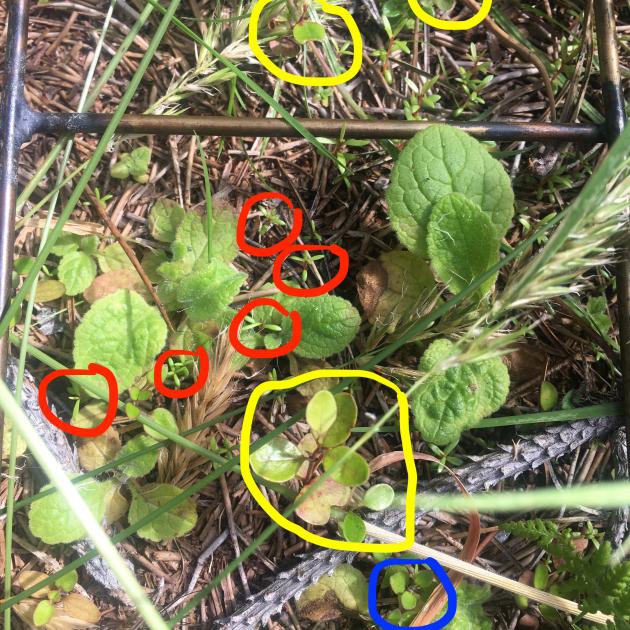 Native seedlings coming away on a property in Skippers Canyon that had been sprayed for wilding pine. Circled in yellow, mountain beech; blue, Coprosma propinqua ; red, manuka. Photo: Supplied
They’re also a hazard. Volunteers aren’t allowed to work in an area if it’s considered unsafe because of unstable trees, Lennox says.

Large-scale restoration of beech forest from seed has never been done before, the project’s scientific adviser, University of Otago botanist Janice Lord, says.

One challenge is that trees in healthy beech forest are highly dependent on an underground network of specialised ectomycorrhizal fungi, the project’s scientific adviser adds.

When forests are cut down and replaced by pine or pasture, these symbiotic native fungi also disappear. This makes beech forest regeneration difficult because although beech seeds will germinate and grow, they will not thrive to adulthood in the absence of appropriate mycorrhizal fungi.

If successful, the project will be important for both biodiversity restoration and for mitigating climate change.

Conservation Minister Eugenie Sage says better connecting the climate crisis with the crisis in the biodiversity is needed as the two are inherently linked.

"Climate change is not a future event, it is happening today so any action an individual can take to protect threatened species or restore degraded ecosystems will not be insignificant in how we adapt and respond to climate change."

Actions like these, multiplied, could make all the difference.

According to a recent report by the Intergovernmental Science-Policy Platform on Biodiversity and Ecosystem Services, restoring and protecting the world’s terrestrial ecosystems could be the most cost-effective way to reduce a third of the greenhouse gas emissions needed to mitigate by 2030 to keep global warming to below 2degC.

The community-led beech seeding project is in its third and final year of central government funding from the Community Environment Fund, the purpose of which is "to empower New Zealanders to make a positive difference to the environment".

Some of the beech seed sown through the project are already 10cm-high saplings and more research is now needed to find ways to inoculate the soil with mycorrhizal fungi at a scale and within budget so the saplings can grow into healthy adults.

What keeps this pioneering project going is people passion.

"Our volunteers are motivated for a variety of reasons," Lennox says

"Some are native plant enthusiasts, some are concerned about the deterioration of the natural environment around the Wakatipu Basin due to uncontrolled development, some want to grow trees to help offset greenhouse gas emissions, and others just need some good karma!"