By Maureen Howard
0 Comments
The life in our streams and rivers has long helped us monitor their health. Now scientists are looking to it again — and in particular, macroinvertebrate life — to tell us whether pesticide use is bringing a new crisis.   Maureen Howard wades in to tell the tale.

When 4-year-old Christoph Matthaei brought home a bucket of snails and they crawled up the outside wall of the house, his mother was not too pleased.

"But I thought they were beautiful snails," Matthaei, now an associate professor of freshwater ecology at the University of Otago, says.

They were the first of many creatures to pass through the family home, including tadpoles from a nearby pond where the young naturalist sometimes played.

By the time he was ready to go to university, Matthaei knew what he wanted to do.

"I was one of those students who wanted to save the world or at least a rainforest," he says.

Enrolling at university, he decided to specialise in stream ecology because of the way it was being taught.

"It really grabbed me." 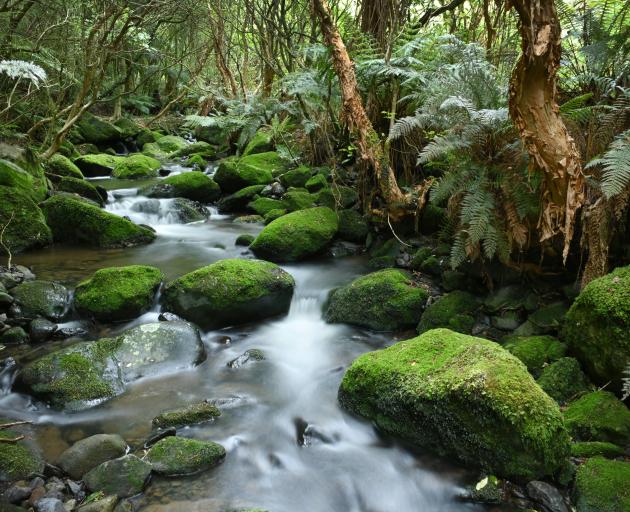 Now, instead of saving rainforests, Assoc Prof Matthaei is helping to protect New Zealand’s streams and rivers by studying the impacts that environmental stressors have on macroinvertebrate communities living there.

The streams and rivers that wend their way across our landscapes carry water, essential for life, to share with our our towns and cities and the farmland crops they pass on their journey to the sea. But waterways are environments in their own right too, home to rich networks of living organisms. Among them are the macroinvertebrates — small winged insects, crayfish and molluscs, waterboatmen and diving beetles.

Macroinvertebrates are organisms without a backbone, big enough to see with the naked eye and small enough to catch in a scientist’s hand net. They’re an integral part of a stream’s ecosystem, grazing on algae, plants and detritus or eating other invertebrates. And they’re important tucker for fish and birds.

Macroinvertebrates are also useful in another way. Because they are easy to survey and some species can live only in clean, unpolluted water, they give scientists and regional councils valuable information about the health of a stream.

"Taking a macroinvertebrate sample gives us insight into what has been happening to the stream over the last several months, or even a year or two.

"Whereas if there has been, say, a pulse of high nutrients or pesticides going through the day before, if you take water samples you won’t pick it up."

Ninety-nine percent of urban rivers and 95% of pastoral and forestry rivers exceed safe limits set for at least one environmental guideline, the Ministry for the Environment’s Our Freshwater 2020 reports. And indeed, in 2018, a Colmar Brunton poll found water pollution was ranked New Zealanders’ number one concern, coming in before cost of living, child poverty, housing and climate change.

High nutrient levels and sedimentation are familiar bogeys, but the impacts of a range of other land use effects on waterways are only recently coming under the scientific spotlight. Streams and rivers face a proliferating range of stressors, many of which are difficult to detect and poorly understood.

Identifying and counting macroinvertebrates in streams over the past 10 to 15 years, he has focused on the impacts of sedimentation on stream health. 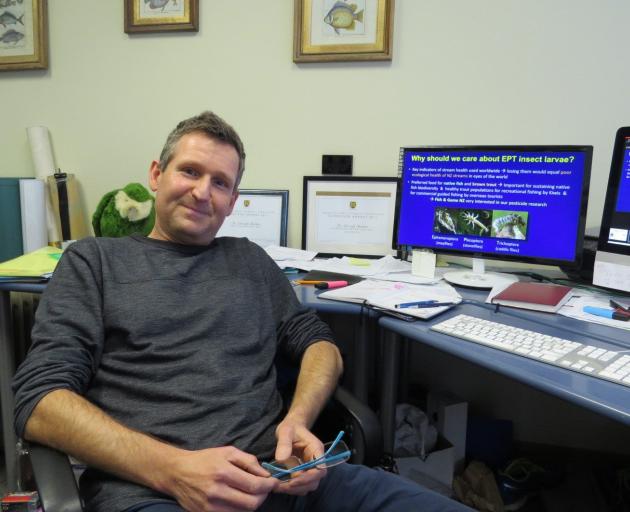 Assoc Prof Christoph Matthaei says we know from overseas research that pesticides are bad for waterways. PHOTO: MAUREEN HOWARD
In recent years, he and his students have turned their attention to "unknown emerging stressors" that are getting into waterways overseas, such as PPCPs (pharmaceuticals and personal care products), "bugs on drugs" (e.g., caffeine and tranquillisers from sewage treatment plants) and microplastics. But "personally, here in new Zealand I’d be more concerned about the pesticides, because we know from overseas research that they’re bad, and we know they’re meant to kill things".

Matthaei first became concerned about pesticides getting into waterways in 2013, when he spotted on the Food and Agriculture Organisation (FAO) of the United Nations’ website that New Zealand was applying pesticides to croplands at a rate of 8.23kg per hectare. For comparison, in 2017, the organisation estimated that New Zealand applied 7.89kg/ha of pesticides on to cropland, while the UK applied 3.24kg/ha, Australia 2.04kg/ha and the US an estimated 2.54kg/ha. Fortunately, cropland covers just a small part of New Zealand, 2.54% of the landmass in 2017 according to the FAO.

Spurred to investigate what these levels of pesticide application could mean for streams and rivers here, Matthaei and his research team conducted an extensive survey of pesticides in New Zealand in the summer of 2017-2018, sampling 36 agricultural streams in Otago, Southland, Canterbury and Waikato. It was a bit of a shot in the dark, he says.

"We didn’t know how much pesticide had been applied in the vicinity of these streams. Nobody has that information at their fingertips."

Using "state of the art" passive samplers, they found low levels of all seven of the pesticides they sampled for.

"We found up to six of them at a single site," he says. 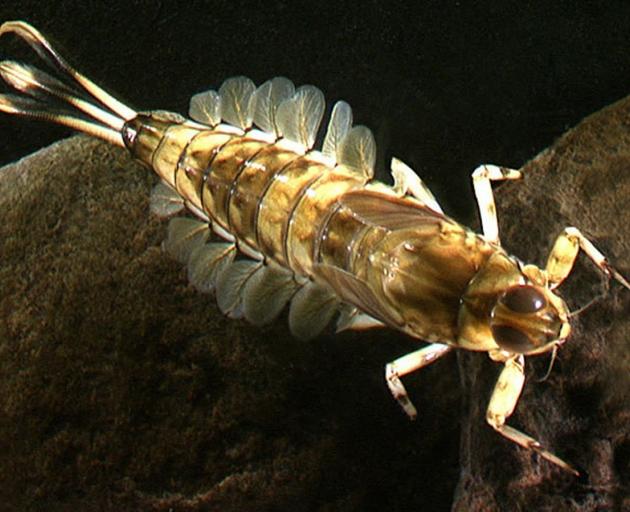 Mayflies are indicators of a healthy stream ecology.
That pesticide levels were low wasn’t surprising, he says, given the severe drought conditions of that summer.

"Overseas studies show that pesticide levels can easily be 1000 times higher when there is more run-off during higher rain fall events."

Matthaei and his PhD student Sam Macaulay followed up with studies in experimental streams in which Macaulay found the larvae of Deleatidium mayflies, the most common and widespread of New Zealand mayflies, were highly sensitive to three types of neonicotinoid insecticides at concentrations commonly found in waterways overseas.

"We know we apply more pesticides so, if anything, it’s likely that our concentrations are higher," Matthaei says.

Neonicotinoids are long lasting in soil and highly water soluble.

Although they don’t last that long in water, he says, a two-day pulse of neonicotinoids at concentrations that might be expected following a rain event "is certainly long enough to impact macroinvertebrates".

The Macroinvertebrate Community Index (MCI) was developed in the 1980s. Each macroinvertebrate species was designated a score depending on its sensitivity to pollution. To assess a stream’s health, a kick net sample is taken and 200-300 of the macroinvertebrates captured are identified, scored and averaged.

While the MCI is particularly good at detecting organic pollution in freshwater streams and rivers, Matthaei says, the same data can be re-scored if other metrics are wanted. For example, macroinvertebrate communities can be scored according to certain ecological functions, such as grazers, detritus eaters and predators, Matthaei says.

Although it is not possible to tell by the species present if a stream ecosystem is about to collapse, some conclusions can be drawn.

"In general, if you have an ecosystem that is highly impaired and really poor in species and dominated by just a few that can cope with these conditions, then they often tend also to be fluctuating quite wildly in abundance."

Our Freshwater 2020 reports that of the 670 species of native freshwater invertebrates assessed, more than a quarter had a threatened or at risk conservation status. One of these is the South Island freshwater crayfish (kekewai/wai koura).

"A major concern is that about twice as many sites are getting worse as better on the Macroinvertebrate Community Index measure," Environment Minster David Parker says.

"Many of our rivers, lakes and wetlands are under serious threat. If we don’t start cleaning them up now they will get worse, take longer to fix and become more expensive to fix — and we risk serious damage to New Zealand’s clean, green reputation, which is also important to our tourism and export industries," Parker says.

The Government’s Action for Healthy Waterways package comes into force next month, replacing regulations set in 2014 and 2017. Within the folder is the updated National Policy Statement on Freshwater Management (NPS-FM) and the revised National Environmental Standards for Freshwater (NES-FM).

"The freshwater reforms will put new obligations on all New Zealanders to protect and care for freshwater. They provide for a phased approach — to halt the degradation of our rivers and lakes, achieve a noticeable improvement in five years and restore our waterways within a generation," Parker says.

Pesticides aren’t explicitly mentioned in the package but as they are directly toxic to aquatic species they are covered in the water quality component of the compulsory values that councils must manage for, he says.

"Regional councils are not required to set specific target states for pesticides but they can if they wish." 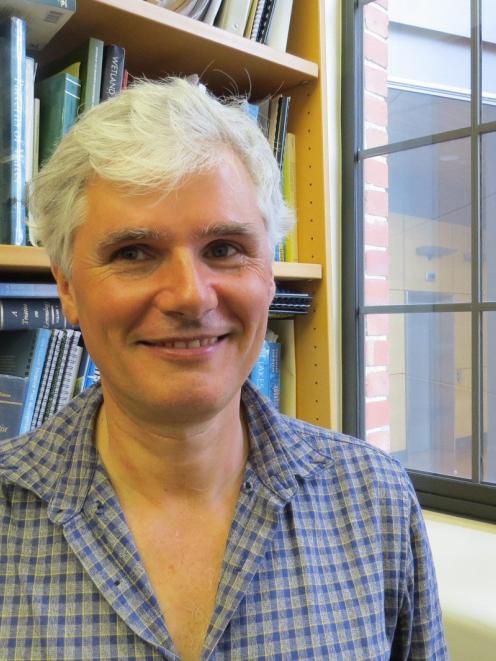 Marc Schallenberg
The package has been developed with advice from scientists, stakeholders, regional councils, industry representatives, Maori and other leaders in the community.

As one of the advisers in its development, University of Otago research fellow in freshwater science, Dr Marc Schallenberg says the changes to the previous National Policy Statement on Freshwater Management set in 2014 and updated in 2017 are quite substantial.

"Not only have they added more attributes and guidelines, and brought in new ecosystem health indicators, but they have also brought the deadline forward [from 2030] to 2025. And in the interim, the new NES-FM specifically addresses the land use practices most damaging to waterways."

Councils still need to report MCIs and now additional metrics for macroinvertebrates are also included. The bottom line for macroinvertebrate health has also been raised from an MCI value of 80 to 90. If councils record a value below this they are required to develop their own action plan to improve the MCI in the stream to at least a value of 90, Schallenberg says.

"By including MCI as an attribute, government is promoting the idea that some attributes of stream ecosystem heath are still important to monitor and protect, even though their connection to land use practices may be less direct than, for example, some water quality attributes.

"In a way you could say that this approach values the macroinvertebrates for their own sake, not simply as an indicator of the effects of poor land use practice," Schallenberg says.

Prof Matthaei believes now is a good time to refocus the spotlight on agricultural pesticide concerns and their potential impacts on macroinvertebrate communities and overall stream health.

"Some of the people are saying, ‘Hey, we should forget about these strange restrictions for farming because now we need as much farming as possible. We need to intensify that because that’s our economy, that is what’s going to get our economy going again’."

But more research now could identify how high concentrations of pesticides actually get in New Zealand rivers and streams and how they fluctuate over time, as well as their effects on different macroinvertebrate species and fish, he says.

In February, Matthaei gave a talk at the Environmental Protection Authority (EPA) on his pesticide research findings. Two weeks later he was invited to join a workshop hosted by the Parliamentary Commissioner for the Environment about emerging contaminants of concern.

"Fifteen years ago nobody cared about sedimentation. But there has been a real turn around in awareness that fine sedimentation in streams is a serious problem. Things are definitely moving in the right direction.

"I am optimistic that this, too, will happen with pesticides over the next five to 10 years."