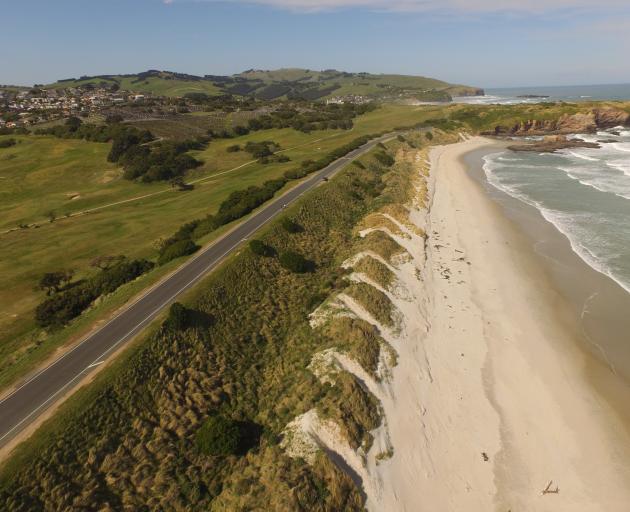 Notches in the St Kilda dunes somewhat counter-intuitively help the sand to build up. PHOTO: SUPPLIED
Climate change is challenging the St Clair-St Kilda coastline and the protection measures of the past. Maureen Howard finds out what the Dunedin City Council is doing to adapt to nature’s ways. 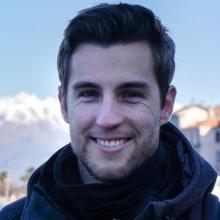 "We cut these for my master’s thesis," he says, studying an aerial photo of "dune notches" at St Kilda.

European marram grass, planted to stabilise the dune system and protect the reclaimed land behind it, has with time created a dense thatch of roots in St Kilda’s dunes. Paradoxically, this has contributed to the beach losing some of its protective sand buffer.

When a dune system gets over-stabilised with vegetation, it can’t migrate or grow higher, Assoc Prof Mike Hilton, who supervised the project, explains.

"Effectively, it becomes a fixed barrier that can only be eroded over time as sea level rises and storm waves erode the face of the foredune," the University of Otago coastal geographer says.

In 2016, the Dunedin City Council supported their proposal to cut notches in the foredune, a world first for the purpose. Three dune notches were cut with an excavator and prevailing southwesterly winds did the rest of the work.

"We saw around 80cu m of sand come through each of these features within about three months," Simons-Smith says.

Following that success, the council has put in more than 30 new notches that have helped the foredune grow wider.

By widening the foredune, it will become better at protecting the built infrastructure behind it, Prof Hilton says.

"A wider foredune is less vulnerable to removal [by storms] overnight or over a few weeks."

Dune notching will join the list of coastal erosion solutions the council will consider early next year as it works with Otakou Runaka and the wider community to develop a vision and long term coastal plan for St Clair-St Kilda / Whakahekerau-Rakiatea Rautaki Tai.

Sea level rise due to changing ocean temperature is the most certain of climate change impacts out to mid century, Dr Judy Lawrence says.

The rate of rise will vary from place to place, depending in part on factors such as whether the land is rising or falling, the senior research fellow at the New Zealand Climate Change Research Institute, Victoria University Wellington, says.

The St Clair-St Kilda coastline has had at least five notable coastal erosion events in the past 10 years.

Most of these events have been tackled with a range of hard engineering solutions. Since the turn of the century there’s been a new seawall, geobags (filled with sand), dumpings of rocks or sand and buried Reno mattresses (steel cages filled with rocks) placed to stem further erosion.

It’s a typical reaction, Prof Hilton says, where coastal erosion during a storm event or sequence of events threatens infrastructure or property.

"And then the reaction is to throw something between the ocean and that land," he says.

"We were too quick to assume that engineering, building walls, whatever it is, is the best option," he says.

The most significant hard engineering feat of all has been the reclamation of land in south Dunedin begun by European settlers, which included removing the original coastal dunes once 200m inland, at Victoria Rd.

"John Wilson [Ocean] Drive keeps the ocean out of South Dunedin during storms, along with the landfill under Kettle Park and Marlow Park," he says.

In the short to medium term, he says, John Wilson Ocean Drive can be protected by growing the foredune in front of it, while in the long term, the scenic road could be replaced by a wider dune system to protect communities behind it.

"We are very good at making dunes if we need to, and we can shift sand around in large volumes and plant it."

Four years on, fellow dune enthusiast Simons-Smith is still working on this section of the coast, this time as a coastal specialist for Dunedin City Council.

Simons-Smith wants to be able to bring a range of options before the local community and to do this, he says, we’ll need a more proactive approach.

"All sorts of opportunities open up if you actually start to look at it in a more forward-looking manner, rather than being forced to take a certain management action based on your short-term needs," he says.

For example, back in 2007, the council had to react to a coastal erosion event by spending a lot of money on installing a buried Reno mattress at Moana Rua Rd and dumping sand, he says.

"The Reno mattress isn’t providing any real benefit now and the sand that was dumped on the beach is all gone." 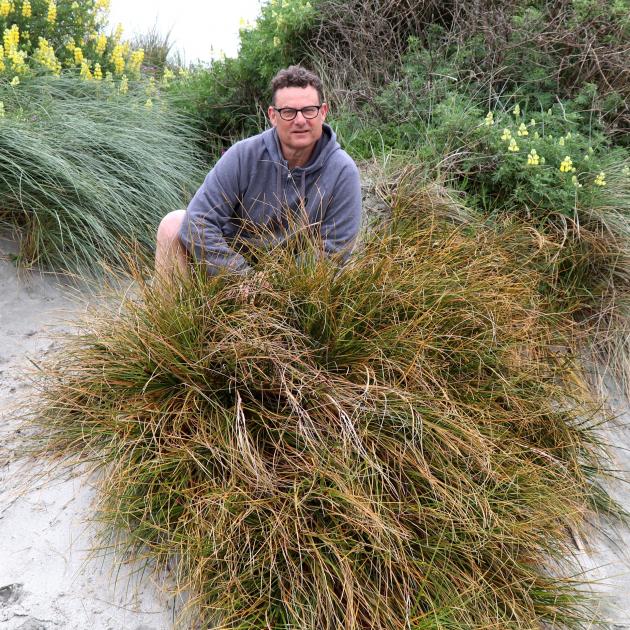 Coastal ecologist Paul Pope with native sand binder pingao/pikao, now rare along the Otago coast. PHOTO: SUPPLIED
Proactive approaches might include clearing out the rubbish in the dune adjacent to Kettle Park and replanting the dunes with native plantings where suitable, he says.

Since February, Simons-Smith and community engagement specialist Garrett Chin have been working with Otakou Runaka, the local community and the wider Dunedin community to find out what they value most about the St Clair-St Kilda coastline.

"One thing that’s quite different with our engagement process is that we are running dozens and dozens of stakeholder sessions, community drop-ins and other opportunities for people to get involved," Simons-Smith says.

"We’re spending time on those different steps to really understand the community at a deeper level in the context of climate change."

So far they’ve reached about 5000 people and had more than 1000 formal responses, Simons-Smith says.

And options for visual thinkers? The council has run a printmaking session in partnership with local artists.

Chin’s looking forward to seeing what comes out of their second workshop this weekend.

"It’s something different, where people get the opportunity to deeply refocus and communicate their feedback in a visual way," he says.

"However, given that every community is different, there is a lot of teething, a lot of tailoring to suit the local context."

The engagement process is between step 3 (identifying values and objectives) and step 4 (developing options).

Four overarching themes of feedback — values — have been identified, Chin says: long-term protection of the coastline, better natural environment and habitat for wildlife, better and safer access to the beach, and better opportunities for recreation and play.

Now the council is asking people to reflect on and compare these four value sets as they relate to sections of the coastline; at St Clair Esplanade, Middle Beach and St Kilda Beach.

How the community ranks those values will help to set management objectives, with potentially long-term consequences.

Simons-Smith sees this as the start of many conversations about and iterations of the coastal plan over coming decades.

"We don’t know everything now and we have to be honest about that, so we don’t make things worse. We’ve already got a plethora of legacy issues along the coast," he says.

One of the underlying principles of the local government guidance document is that the changes communities make now need to allow future adaptive changes.

Dr Lawrence, an author of the guidance document, says councils are starting to get their coastal adaptation plans together.

One of the things councils need to understand, she says, is that when it comes to sea-level rise there is uncertainty in the system, because there are different scenarios for the future. One of those variables will be how efficiently the world can reduce its emissions, she says.

"And that’s why you don’t want to be locking things in now that you can’t rearrange or adjust or do something completely different in the future," she says.

Another unknown is who will pay for the long-term costs of helping communities adapt to a changing coastline.

Some adaptive pathways cost less than others. For example, community plantings to restore dunes and protect coastline in the Bay of Plenty have cost far less than engineering solutions would have.

Paul Pope wants to see the conversation broadened, to include Dunedin’s long coastline from Waikouaiti to Taieri Mouth.

"In terms of biodiversity, ecology, climate change, there’s a wider conversation that needs to be had," he says.

"We have some of the most stunning beaches in New Zealand, but they are dominated by weeds which affects their functionality as dunes."

In our favour, he says is that many of the dunes have been protected from housing pressures due to their reserve status.

Hilton’s vision for the St Kilda coastline is a new landscape that provides space for storm waves and sea-level rise, better access to the beach for people, habitat for penguins and sea-lions, and viewing points for those less able to negotiate dunes, he says.

"And it will be a landscape that’s much cheaper to manage than the current one." 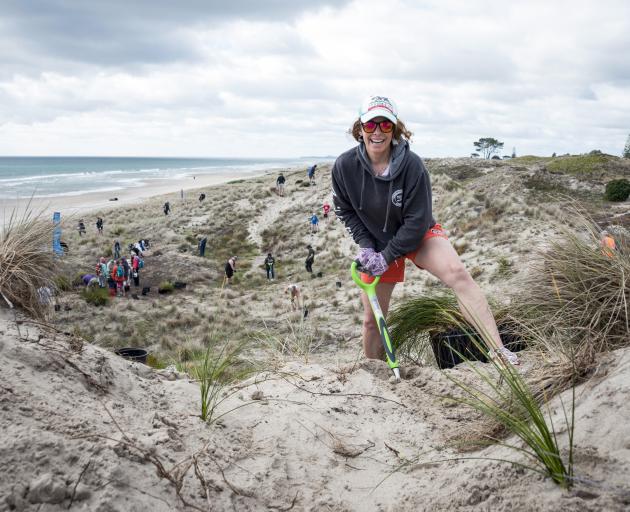 A community working day planting natives in sand dunes in the Bay of Plenty. PHOTO: SUPPLIED
Natives returning to dunes

Today pingao, that once grew on almost every foredune in the southern South Island, is rare; displaced by invasive marram grass, overharvesting for weaving, overgrazing, sand mining and dune development, says the Coastal Restoration Trust of New Zealand.

However, the species could be returning to the Otago coast soon.

Frustrated by the small numbers of native pingao replanted in the region, coastal ecologist Paul Pope last year approached the Otago Corrections Facility in Milton, taking them pingao seed. Anticipating 2000 to 3000 plants, it looks like he will get about 15,000 plants over the next couple of years, he says.

"It’s just such a wonderful thing. Having these men working on this project. I don’t think they probably realise how critical this species is for conservation on the coast."

Pope has given plants to Kati Huirapa Runaka ki Puketeraki, which may plant them out in the autumn, he says. Other communities to have expressed interest include Brighton-Saddle Hill, Aramoana and Otago Peninsula.

Planting natives to create active dunelands is an approach that’s working well to protect the Bay of Plenty. There, volunteers have planted 1.5million native dune plants along sandy coastline over the past 25 years.

"In the mid-’90s the coastline was eroded, the dunes were not performing as they should and the community and its infrastructure was under threat with every large storm," Coast Care BOP regional co-ordinator Paul Greenshields says.

"Volunteers have helped to build a resilient community by increasing the performance of the dune system and creating a natural buffer to sea-level rise and the effect of climate change," he says.