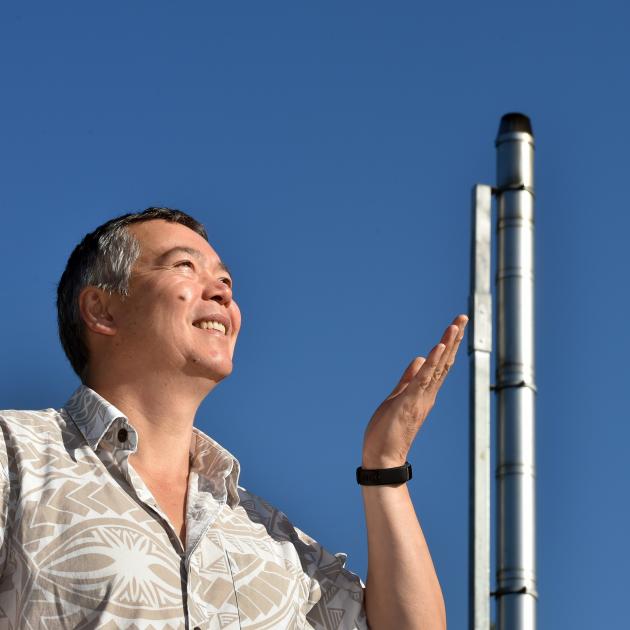 Prof Michael Jack is working with schools to replace their old coal-fired boilers. Photo: Peter McIntosh
We still burn a lot of coal to ward off the cold and to fuel industry, despite the price in carbon emissions. But as Maureen Howard reveals, there’s a cleaner, plentiful alternative ready and waiting in the wings.

When winter arrives the traffic-jam at the school gate spikes, car exhausts condensing in the cool morning alongside the exhalations of excited children.

Mixing with them both will likely be a whiff of the old school boiler, fired up a little earlier to take the chill off classrooms. Typically, it will be burning coal, filling the air the school’s pupils breathe with gas and particulates best not inhaled.

These old boilers also cast a longer-term cloud over those same young people. The carbon emissions associated with burning coal are inextricably linked to the planetary heating at the heart of the climate crisis

Prof Jack is delighted to have played a role in one Dunedin school preparing to switch its coal boiler to carbon-neutral woody biomass, and hopes to help a lot more in the region do the same.

Opoho Primary School, on the hill above the University of Otago, will soon be replacing coal with wood pellets.

As head of the University of Otago department of physics’ new Energy "Living Lab" initiative, operating out of the Otago Energy Research Centre, Prof Jack’s group teamed with Environschools to help make it happen.

The school’s successful application to the Government’s newly created New Zealand Upgrade Programme had "a little bit of help” from us, Prof Jack says.

The Government’s contestable fund is its most recent initiative to transition the public sector away from burning coal.

Burning coal releases about 90 tonnes of CO2 for every 1000GJ of energy produced. And we still burn a lot of it.

The country gets 4.1% of its energy by burning more than one million tonnes of coal. If we keep that up, it will make reaching emission reduction targets tough. 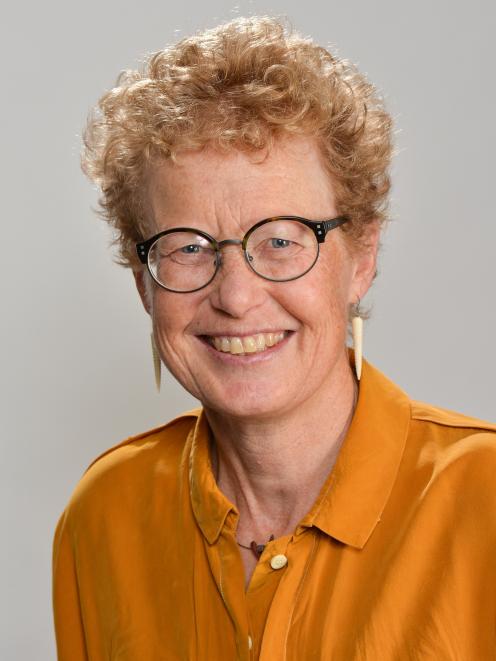 Dr Robyn Zink
The Otago branch of Enviroschools started the project at the end of 2017. Prompted by the concerns of school principals and board members unhappy with burning coal but feeling unable to move away because of the hefty capital costs of installing a new biomass boiler, Enviroschool’s Otago regional co-ordinator, Dr Robyn Zink, brought a group together that included the Ministry of Education and the university to see what could be done.

"Our aim is to help all schools across Otago develop ‘holistic energy plans’ for their school so that they can then move away from coal, but also think about the other things they can do around greater energy efficiency,” Dr Zink says.

The university’s Living Lab project is in its first phase: all schools in Otago have been invited to participate and the research team is now working with schools that have responded.

"The idea is to help these schools build business cases that they can then take to the ministry or other places to get funding to do these initiatives, including converting their coal-boilers,” Prof Jack says.

Ministry of Education records show there are more than 20 schools in Dunedin and almost 50 across Otago with "active" coal-fired boilers. Shifting schools from coal to woody biomass, Prof Jack says, is one of two major opportunities for Dunedin to reduce its use of the fossil fuel, as identified by the "Dunedin Energy Study" — a piece of research by the university and the Dunedin City Council.

The other opportunity for the city, he says, are the coal boilers steaming away within the Dunedin Energy Centre on Castle St that power New Zealand’s largest district heating scheme. The centre’s owner, Pioneer Energy, provides heating to the university and Dunedin Hospital, and previously to Cadbury’s.

In 2016, the university approached Pioneer Energy to see if the Dunedin Energy Centre could supply its buildings with carbon neutral heating by modifying one of its large coal-fired boilers to run on wood chips.

The Dunedin Hospital rebuild, part of which will be sited where the Dunedin Energy Centre now sits, has sparked discussions about the potential for a larger district energy scheme to phase out fossil fuels in other buildings around the central city. So far, a feasibility study has shown the project to be economically and technically viable — and woody biomass is the preferred option.

The council, university, Southern District Health Board and Ministry of Health are all working together on the project.

Jinty MacTavish, a principal policy adviser at the council, says the timing is great.

"Transitioning the city heating systems off fossil fuels is fundamental to achieving council’s target of being carbon neutral by 2030. Working collaboratively to achieve that makes a lot of sense, as it provides opportunities to maximise cost efficiencies."

Each of the parties is considering the possible district energy scheme against other options, but there are some time constraints, MacTavish says

"If the scheme is to proceed, co-ordinating the installation of the pipes with other infrastructure works minimises both disruption and cost. That’s why we’re trying to co-ordinate decisions around the district heating scheme with the planning for the George St upgrade."

Whatever transpires with the district heating scheme, the university will move away from coal by the end of the year, Willis says, helping it achieve its goal of reducing its greenhouse emissions, and becoming 100% renewable by 2030.

By switching from coal to wood fuel for its heating, the university is already saving 17.5 kilotonnes of CO2e per year. That’s equal to "about 80,000 to 100,000 houses putting solar panels on their roofs".

It’s a case of one person’s trash being another’s treasure.

Woody biomass refers to the “waste” component of both the timber and the wood processing industries. It’s the stuff that’s usually left to rot in the forest and includes low grade timber, tree thinnings, branches and sawdust. When used for energy, woody biomass is typically processed into wood chips or wood pellets.

In practice, absolute carbon neutrality doesn’t exist because most processing and transport operations are powered by fossil-fuelled machinery and vehicles. However this is generally "a small fraction" of the energy supplied by woody biomass, according to the International Energy Agency (IEA). 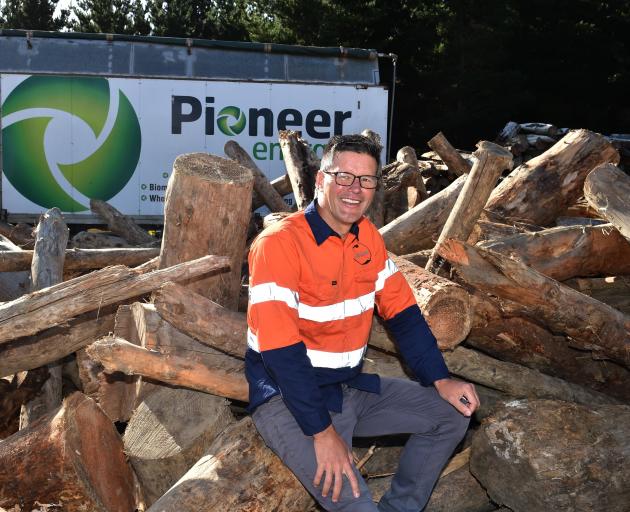 Lloyd McGinty a wall of wood is coming that can help shift heat production away from coal. Photo: Gregor Richardson
That carbon content can be minimised by using nearby sources of wood fuel.

Woody biomass won’t replace coal in every situation. Coal burns at a higher temperature than wood, reaching the 1500degC needed to smelt steel.

Lloyd McGinty, director and energy consultant at Ahika Consulting, based in Dunedin, says that with the right boiler, woody biomass can get up to 900degC, sufficient to generate super-heated steam for processes such as a combined heat and power plant. Aluminium melts at 660degC, according to NZ Minerals and Petroleum.

The wood can also be processed to burn hotter, and the economics of doing so improving as carbon prices rise.

"The Government is pushing against coal and rightly so, and so the market is a bit nervous. But they are also doing their due diligence now on what are their alternatives to coal."

The Bioenergy Association of New Zealand says the country gets 10% of its total energy from bioenergy and that this could increase to 27% by 2050.

Some of the difference could come from co-firing, converting boilers to run on woody biomass and replacing coal boilers with woody biomass boilers.

Ahika estimates there are close to 90 coal-fired boilers in the Otago region, and fewer than half that number of woody-biomass boilers. The opportunities for obtaining a reliable local woody-biomass fuel supply for medium-sized boilers under 20MW are good, McGinty says.

Shifting from coal to woody biomass usually involves a significant capital investment in a new boiler, but that can be expected to last more than 30 years.

“One of the first questions we get asked is, ‘Is there enough wood?’,” McGinty says.

The answer, for Otago, is yes, he says.

In 2017, Scion estimated the total volume of recoverable woody biomass at more than 200,000 tonnes (1,220,000 GJ) per year over the next 25 years. That’s enough for 40 medium-sized coal boilers, McGinty says, and with the more recent One Billion Tree Programme under way, the estimates are conservative.

“Potentially, there’s a wall of wood out there," he says.

A pine forest is typically thinned from 1200 trees per ha down to just 400 trees. In addition, New Zealand exports about 13 million cubic metres of low-grade logs and woodchips annually, he says.

New Zealand manufactures coal-boilers at several sites, opening the door to making our own boilers for woody biomass, he adds.

In 2015, he flew to Europe to observe "sophisticated" large-scale industrial woody-biomass boilers that can burn low-grade organic waste such as pallets, MDF and even compost.

They are expensive to build but running costs are low.

"I think we’ve got a long way to go to understand what we can be using."

That kind of boiler could create new opportunities for more district-scale space heating, which is common in Europe.

Meanwhile, Prof Jack and Dr Zink are keen to progress more schools to the next level.

“Hopefully we can get more schools over the line and on to some of these schemes that the Government is putting out around reducing greenhouse gas emissions,” Prof Jack says.

The local benefits of converting schools’ coal-fired boilers to woody biomass are clear.

"We should be doing all the schools as a priority. There are so many other reasons that it’s good to move away from coal," he says.

Wood is a good sustainable fuel and, with the right gear and management, you can run your home on it and have fertilizer for your garden from the ash.

"Burning coal releases about 90 tonnes of CO2 for every 1000GJ of energy produced."
How much CO2 is released for 1000GJ of wood chips/pellets?