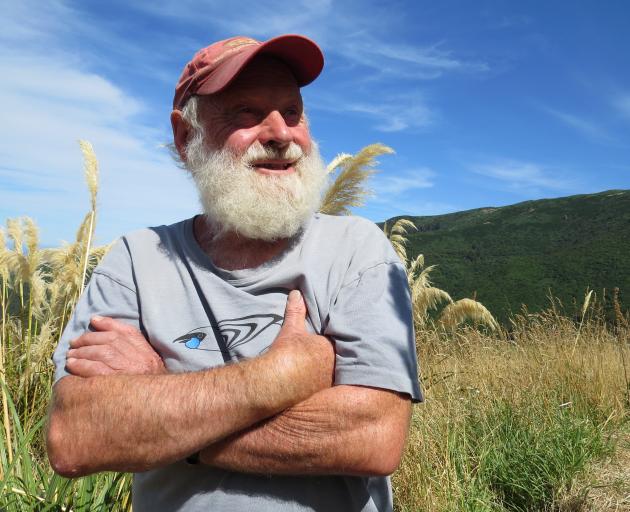 Hugh Wilson at the Hinewai Reserve on Banks Peninsula. Photo: Maureen Howard
All pathways to net zero carbon by 2050 depend on planting more trees. But does the type of tree make a difference and what role can natives play in the Government's One Billion Tree Programme? Maureen Howard reports.

Across the country, gorse is slashed and sprayed.

But not on the Banks Peninsula property where botanist Hugh Wilson lives and works.

At the Hinewai Reserve, the gorse has instead been tended with fencing, pest control and the removal of other invasive exotics. And 30 years on, the thicket of gorse that once covered 55% of the property has been succeeded in many places by natives that came as seed, delivered by bird poop and wind from a nearby stand of old-growth forest. Reserve kaitiaki Wilson doesn't have the woody equivalent of the Midas touch. He has simply worked with nature.

"Our whole philosophy was to leave the gorse alone and let it act as a nurse canopy for native regeneration," he says.

"It's several big catchments. People are often surprised at the size of it."

Wilson's native forest-building efforts are also tied to his climate change-busting low-carbon lifestyle. He says he's "far from pure", having taken many aeroplanes in his youth. But Wilson has not flown since 1983, except once when he had an accident that involved a large rock and he had to be rescued by a helicopter.

"I'll never get in an aeroplane again ... but I hate being a fanatic. But I am a bit of a fanatic," he says, laughing.

Trees such as those looked after by Wilson will play an important role in New Zealand's effort to go carbon-neutral by 2050. They absorb carbon until they are cut down or die. According to the New Zealand Forest Owners Association, in 2015 New Zealand's total gross emissions were 80.2 million tonnes of carbon dioxide

(Mt CO2-e), 23.7 Mt CO2-e of which was removed from the atmosphere by the forestry sector.

Now, tree saplings are being dug into dirt across the country as part of the Government's One Billion Trees Programme. It will give groups, landowners and industry funding to plant one billion trees by 2028.

According to Te Uru Rakau Forestry New Zealand's website, 500 million trees will be planted during the next 10 years as part of business as usual. The Government hopes the remaining half will be achieved by lowering barriers that landowners face, as well as introducing incentives, such as funding and research partnerships.

One person excited by the One Billion Trees Programme is Dr David Bergin, a trustee of Tane's Tree Trust and technical adviser to Trees that Count, who has nearly 40 years' expertise in planting and managing native trees. At Tane's Tree Trust, Bergin has compared the relative carbon sequestering capabilities of native tree species with exotic tree species. Broadly, the findings show fast-growing exotics such as radiata pine and eucalypts store more carbon in their first 20 years of life than native species, such as totara, matai and kauri, which initially have a slower growth rate. 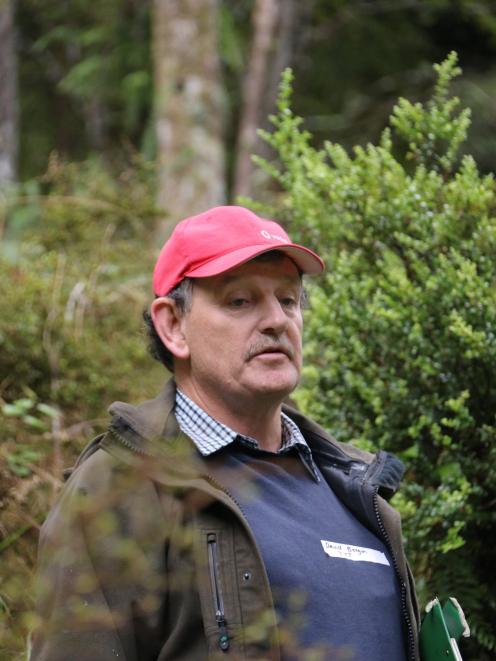 David Bergin. Photo: Supplied
Where it gets more interesting is when researchers included the carbon stored in native shrubs, such as manuka, which are planted first on open sites to provide shelter for native tree species. When both native shrubs and young native trees are taken together, their carbon sequestration rates are comparable with fast-growing exotic plantation species.

Established in 2008, the Permanent Forest Sink Initiative (PFSI) lets landowners reap the value of the carbon sequestered by covenanted forest on their land. As carbon prices increase, landowners will earn more by returning marginal land to permanent native forest.

Under the PFSI, older mature stands of permanent forest are not eligible for carbon pricing because of the assumption that growing forests absorb more atmospheric carbon than old forests and that mature old-growth forests eventually reach a carbon equilibrium.

However, a growing body of evidence suggests the contrary. Research published in the journal Nature found that 97% of 403 tropical and temperate species fix larger amounts of carbon as they age compared with smaller trees. It seems that trees, like most of us, are prone to a little middle-aged spread.

Associate Prof Janice Lord, of the University of Otago's botany department, believes that when tackling climate change, we must look to the long term and that permanent native forest will ultimately sequester more carbon than rotational forest.

"Our podocarps can get easily as big as exotic conifers in the long term. Kauri, totara - all of the podocarps. They are all big trees - they just take a while to get there."

Our ancient forests may already be absorbing much more than previously thought.

Typically, the carbon content of forests is measured by taking samples of tree girths and heights and extrapolating the data to calculate carbon uptake.

"This has historically been used to estimate carbon uptake, but it doesn't capture the whole story of carbon exchange in the forest," Niwa scientist Sara Mikaloff-Fletcher says.

She uses measurements of CO2 levels in the air and calculations from a model that traces the land or ocean the air has come from. Her preliminary work has found a large carbon sink in the South Island, which her modelling has pinpointed as the ancient forests of Fiordland.

"The data suggests that, in this region at least, mature indigenous forests take up more carbon than previously anticipated, and at this time we don't know why."

This year a new MBIE-funded research programme, CarbonWatchNZ, will deploy monitoring stations to Fiordland to shed new light on what is happening.

Unlike natives under permanent forest, atmospheric carbon from exotic forestry is released when trees are harvested and replanted, typically on a 30-year time-scale. A proportion of forest carbon harvested as timber will be stored permanently in buildings and other structures or turned into paper products. The rest will release its carbon when it is burned as biomass or left to decompose as "slash". The Ministry for the Environment estimates that 50%-60% of wood removed from forests is converted into wood products.

Parliamentary Commissioner for the Environment Simon Upton recently suggested that exotic plantings be used to offset only short-lived gases, such as methane, rather than longer-lived CO2, for this reason.

If the will to plant natives as well as exotics is there, the capacity is not. There is a shortage of saplings as native plant nurseries have been in decline. At a meeting for members of the native plant industry held in Christchurch late last year, many reasons for the decline were discussed, including competitive tendering processes, which fuel a race to the bottom, benefiting no-one.

Once planted, native saplings are also more time-consuming to tend than exotics.

"You can't just go to a paddock and plant totara plants and expect them to do well," Prof Lord says. Instead, with funding that includes the One Billion Trees Programme, she and her colleagues are pioneering an array of techniques to "speed up ecological processes for large scale reafforestation". For example, the team will look at the seed biology of native species, mixed species successive planting, large-scale methods of sowing native forest using agricultural technology and promoting below-ground mutualism of soil fungi that has been lost from soil under pasture or conifers.

"Many of the roots of our [native] species are reliant on forming associations with those fungi and that is critical for them successfully establishing and surviving."

Seeds will be sourced provincially, preserving genetic diversity, and the programme will produce a low-cost "recipe" of actions for community groups tackling large-scale afforestation.

"I'm not in this to make money. I am in this to do something that makes a difference," Prof Lord says.

Associate Prof Janice Lord says we must look to the long term and that means permanent native forest. Photo: Gregor Richardson
Careful planning of exotic forestry expansion will be required to avoid flooding, slips and soil loss. As well as a lower fire risk, permanent native forest generally helps to stabilise land at risk of slips, while native plantings along riparian margins of waterways reduce soil run-off. Te Uru Rakau now categorises land according to its susceptibility to erosion and prohibits new exotic plantations on high-risk land. The severe slips at Tolaga Bay in 2018 came from older forestry blocks. In Otago alone, 21,265ha of land is categorised as being at high risk of slips.

Four months into the One Billion Trees Programme, more than 60 million trees have been planted, of which 13% are natives.

Kevin Hackwell, chief conservation adviser to Forest and Bird, isn't yet concerned about the low percentage of natives being planted. He understands that it will take time to build up the seedling supply.

"The question I'd be asking the Government is how much effort are they putting into native nurseries to be actually able to supply a reasonable proportion of natives."

Hackwell did his master's degree thesis on the nursery prowess of gorse, so he also knows that there are other ways to return land to native forest, as demonstrated at the Hinewai Reserve.

There, native trees are busy sequestering atmospheric carbon, as they have been doing for the past 30 years, as well as creating habitat for native birds and invertebrates.

Wilson enjoys the multiple benefits of his restoration work on Banks Peninsula.

"It gives me great satisfaction that it is an example like that."

For his pioneering work in native regeneration, Wilson is highly regarded by his peers.

Suited to the South 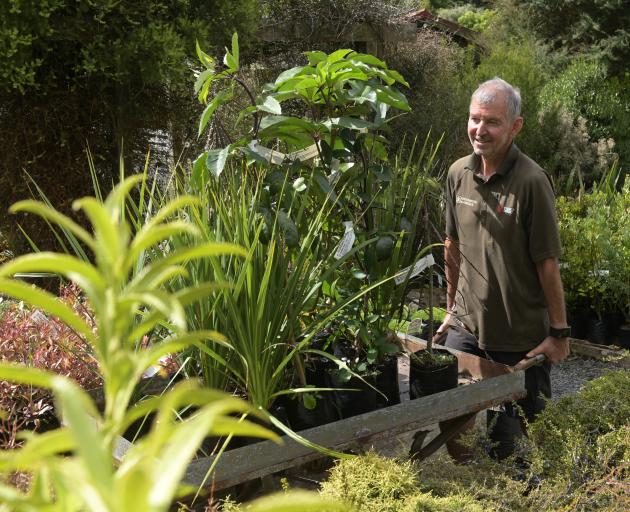 Ribbonwood Nurseries co-owner Philip Dunn with natives for the backyard. Photo: Linda Robertson
In urban areas, using gorse as a nursery for natives will not endear you to your neighbours.

Instead, planting and management is required to grow native plants, such as a

five-year weeding plan to out-compete grass, fencing and tree guards for livestock and rabbits, and traps for possum control.

"Sometimes [plants fail when] the basics haven't been followed through. And, of course, there is always a bit of bad luck sometimes with some sites, such as a bad drought," Dr David Bergin, of Tane's Tree Trust, says.

Take the bag off first!

If conditions are clay, sandy or especially dry, add organic matter such as compost

Most plants die in gardens because they are too wet so put in drainage, raise plants slightly on small mounds or choose specific bog plants.

Ask nursery staff for advice so you get the right plant for your site.