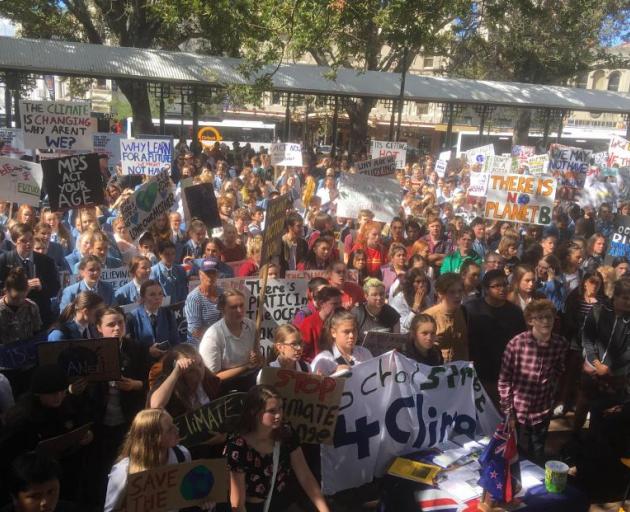 Dunedin pupils gathered in the Octagon on March 15 as a part of the global Strike 4 Climate. Photo: Jono Edwards
There's good news daily about sustainability. Stories of a waste-busting initiative here, a clean-energy conversion there, and somewhere else a biodiversity restoration project under way.

They are all reasons to believe we have both the wherewithal and the inclination to face the environmental challenges of the 21st century.

But probably the best story of all happened just a few weeks ago when thousands of school pupils up and down the country skipped class to march against climate change.

It was further evidence of what a terrific job the country's teachers are doing between the hours of 9am and 3pm. Interviews with young people showed they have a very good understanding of the basic science behind climate change.

Top marks all round.

If any further reinforcing of the science was needed - and it isn't really now, the data set around climate science is undeniable - it was delivered just last week by the World Meteorological Organisation, which relayed that the impacts of global warming are accelerating.

Science has done its job then, it has served up the facts so the rest of us can take informed action.

Our high school pupils get that.

And it applies across the range of issues that need our attention.

We know we're on the brink of a sixth mass extinction event because biologists and others are out in the field counting and documenting. And we know microscopic pieces of waste plastic are now beginning to mess with life at the very bottom of the food chain, because microscopes have been turned to that phenomenon as well.

Those facts are available in the classroom, just as they are to the rest of us.

The thousands who marched were saying they have heard the science and they know it is serious. In particular, they know the global warming show is going to start really kicking off during their lifetimes.

Naturally, the parents of the marchers care about this too. Indeed, polls show most New Zealanders are concerned about climate change, even as our carbon emissions climb.

So, there's a disconnect that still needs to be addressed.

We are as a country apparently thinking one thing then behaving as if business as usual will suffice, continuing in a largely uninterrupted fashion with our everyday narratives.

We stop short of the new narratives that would be genuinely consistent with science's alarming data set.

That, though, is precisely what our children are asking of us, for a narrative, a story that makes sense.

And story-telling is not just for children. Rather, it's the way we all understand our world.

We weave the information we daily encounter into the screenplay of our lives, all the disparate messy data points are sorted so they hang together and make some sort of sense for us. We like to think that we're being fairly rational, but facts tend to be put at the service of our stories rather than shape them.

Then we stick with those worn-out old stories - despite the evidence of their failings - until something better comes along.

Fortunately, there are a lot of people out there working very hard to provide more sustainable narratives; whether in the area of reducing waste and pollution, restoring habitats or building better home and urban environments.

Some of those new narratives are here, in this edition of resilient.

Maureen Howard's story on the contribution improved urban design can make is a case in point. Making the connections between lower-carbon forms of transport, community wellbeing and improved health outcomes provides the framework for environments that are better all round.

It's a story, or an understanding, of how we might make progress in a way that provides benefits across the board.

It's the sort of story that might just be fit for children.