From Nissan to Jaguar, Volkswagen to Hyundai, the big car manufacturers around the world are gearing up to satisfy the demand for electric vehicles and meet new regulations around tailpipe pollution and carbon emissions.

But for all the high-tech gadgetry of their offerings, sometimes they don't quite fit the bill. In other cases, they've been too slow.

In those instances, clever locals have taken on the challenge themselves, converting their conventionally powered vehicles to battery power. Or in the case of Northeast Valley engineer Steve Ward, upgrading bicycles to lithium-battery power.

Here's a selection of a few made-in-Dunedin examples. 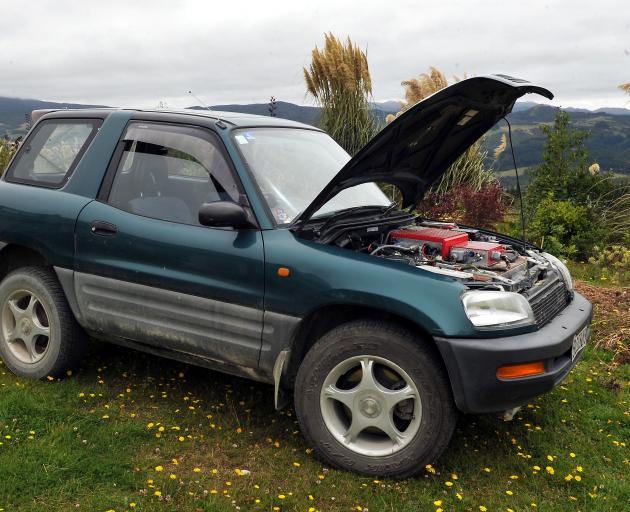 Hagen Bruggemann converted his Toyota RAV4 to electric eight years ago. It's not particularly light for an EV conversion, tipping the scales at 1400kg, but has proved a reliable workhorse, ticking over 90,000km since the conversion. The nominal useable battery capacity when new was 29.5kWh and when checked a year ago was was still 25.5kWh. Hagen says the car uses 170Wh/km on average and has a real-world range of 120km. For the past seven years they've been doing the run from his Waitati home to Dunedin Airport and back without needing to charge and range to spare. His other EV, a 900kg green Honda Insight with a 250km real-world range, has done 86,000km on a 33kWh battery pack.

When the engine died in Steve Austin's New Zealand-assembled 1997 Mitsubishi Magna, he decided to rebuild it; better than it was. It seemed a shame to throw the family wagon away when everything else still worked well, he says. Out came its fossil fuel-powered engine, in went an electric motor allied to a 10kWh lithium iron phosphate battery pack. That provides the 55km range the Broad Bay man needs for his daily commute to town, saving something like 1500 litres of fuel and $3000 in the past three years. All up, the conversion cost about $18,000 he estimates. But now there's no concern about leaky radiators or rusting exhausts; electric cars don't have either.

When energy company Mercury wanted a star for a new promotional campaign, they turned to Dunedin EV conversion experts Hagen Bruggemann and James Hardisty. They transformed the 1957 2.2-tonne Ford Fairlane convertible into a 100% electric machine, with 218 battery cells delivering 50kWh of power. "Evie", as she was dubbed, has a nominal range of about 150km. For a car this size and weight - it's 5.5m long - a heavy-duty engine was required: a 175kW Siemens bus motor. She can rapid charge in about two hours.

It's electrifying work, adding electric motors to bikes, says engineer Steve Ward. Among many memorable projects, he says, is his Yuba cargo bike. It's his "ute", and gets used to cart kids, tools, dogs, shopping, and his partner (and her mum), occasionally all at the same time! It is even used as a mobile puppet theatre. Using an Ezee rear-hub motor in a 20in wheel, running off a 22amp/hr battery, it has lots of grunt to carry up to 200kg. At 20c per 100km, Steve says it's the best ute he's ever owned. Another favourite is the first bike he electrified, a three-wheeled Performer recumbent. Years old, but still going strong, a deckchair on wheels. As they say in the business, you can recognise a happy cyclist by the flies on his teeth.

When a group of touring Citroen 2CV enthusiasts were in Dunedin, Ted Daniels took his along to show them. The Dunedin jeweller's 2CV van had been converted to electric by Dunedin software developer and EV enthusiast Tom Mulder. While the conventionally powered Citroens' engines struggled up Stuart St, Daniels' 60hp AC electric motor - upgraded from the original 22hp - just flew up. Powered by a 12kWh lithium iron phosphate battery pack, it will do 100km between charges, aided by its light kerb weight of 780kg. Mulder has toyed with the idea of doing a conversion for himself; at one time a Daihatsu Terios and later a Mazda CX7. But thinks he might now save up for a Tesla Model 3. Sacre bleu!

Everyone loves driving James Hardisty's converted 1999 Honda Insight. "It's just great to drive," he says. "My old man's driving it at the moment everywhere. He loves it." The car was originally converted for someone else - the work done principally by Hagen Bruggemann - but they changed their mind and James kept it. The conversion was done four years ago, employing a 24kWh lithium iron phosphate battery pack running a 144-volt system, and it's done 60,000km since then. "It has to be one of the best ones we've done," James says. "It's fantastic, it just does for miles." That's about 140km on a single charge to you and me. James clearly thinks its better than Hagen's own Insight (see below). We can probably let them argue about that.