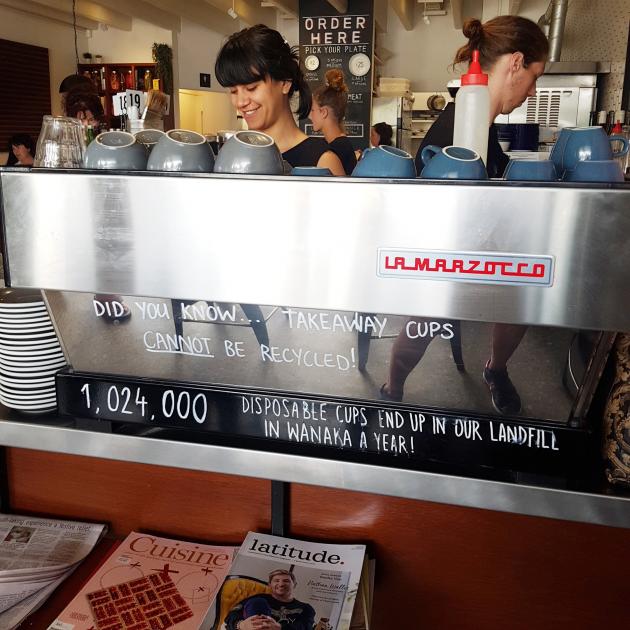 Jorden Lahood makes coffee at Big Fig, where staff use the coffee machine as a billboard to spread the SUCfree message. Photo: Gina Dempster
You may still be able to get a single shot in Wanaka in 2022, but not in a single-use cup, writes Gina Dempster.

Coffee, it’s the legal fix that gets us through the hustle and bustle of our day. But a Wanaka hospitality initiative is inviting coffee drinkers to take a few minutes to smell the roses so Wanaka can become the first town in New Zealand to be free of single-use coffee cups.

Wanaka Hospo-Goes-Eco is a group of Wanaka cafes who got together after the 2018 One Summit, Wanaka’s climate change summit. Their goal: to make Wanaka’s cafe culture more sustainable. Their first target: single-use coffee cups. Supported by Plastic Free Wanaka, they set the ambitious goal of making Wanaka single-use cup free (SUCfree) by 2022.

At present, about 1,024,000 single-use cups go to landfill from Wanaka each year.

In October 2019, the group officially launched Wanaka SUCfree at the 2019 One Summit. 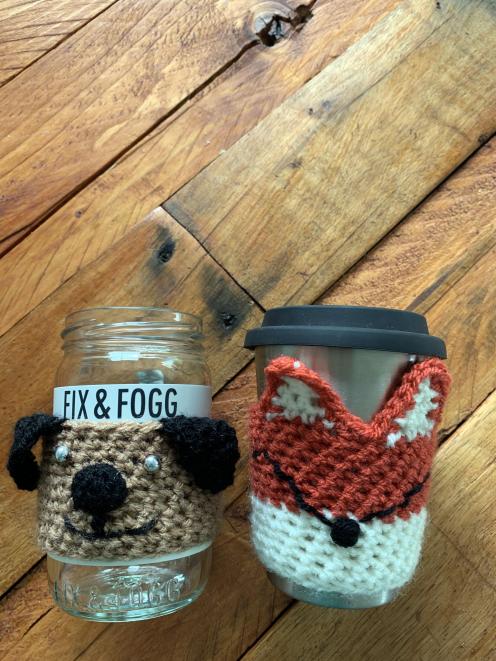 Only a handful of cafes have gone completely SUCfree around the country, as any unhappy customers are likely to take their business elsewhere.

Cardrona skifield is one business that successfully adopted a SUCfree policy for the past ski season. At the launch of Wanaka SUCfree, its success was put down to providing a range of alternatives for customers and support and training for staff at the front line of the change.

The support of cafe staff for Wanaka SUCfree is driving the campaign faster than was originally planned.

Some of the Wanaka cafes involved are on the verge of eradicating takeaway cups for this summer.

Big Fig front of house manager Jorden Lahood said the staff were totally behind the change.

"We have a lot of young staff, and they all care about the planet. We’re all psyched for anything like this."

The staff have had several meetings on how best to support their customers through the change, and how to handle any difficult conversations.

"We’re figuring out how to have that conversation in a positive way," she says.

Offering customers a range of ways to enjoy their coffee without a takeaway cup helps.

"We’re trying to make it as simple as possible for people."

The Wanaka SUCfree campaign encourages people to avoid single-use cups by taking one of three actions: sit, bring or borrow.

Plastic Free Wanaka marketing co-ordinator Jana Reulecke says taking five minutes to enjoy a coffee and the beautiful surroundings can add to the value people get from the transaction.

"It’s the best thing you can actually do, in a place like this. People might ask themselves, ‘Why am I in a rush?’. Sit down, take a minute and enjoy your coffee."

If sitting is a step too far, then standing might be more comfortable for customers in a rush. Big Fig is planning to build a standing bar at the front of the cafe to encourage customers to drink before they go.

"People can still feel like they’re on the go," Jorden says. "People might have a quick chat. We have the big open doors which look out over the lake. We want to build that culture.”

But giving up single-use cups is not just about taking time to enjoy your coffee. Many customers, especially tourists, used to pay more at Big Fig for a single-use cup then drank their coffee in the cafe.

Jorden says some planned to take it away, then changed their minds. But others prefered the feeling of a cardboard cup in their mouth.

But there are all sorts of reusable alternatives for people to embrace, she says. If you don’t like drinking out of cafe crockery, you can bring a glass, ceramic or stainless steel cup. People can change habits quickly once they accept the need to change.

"We did it with plastic bags, and it happened so quickly, but nobody’s feeling the pain," says Jorden. "Coming together as a community is going to be the most important and impactful thing to make [SUCfree Wanaka] normal. If we all get on board together, we could be an entire town where single-use cups just don’t exist anymore."

Grafitti’ing the coffee machine is one of the ways the Big Fig staff spread the message. "Did you know takeaway cups cannot be recycled!" it reads.

Ben Quinn, the staff member in charge of environmental sustainability, researches the facts, once staff have discussed which messages it would be useful to focus on.

"People are confused about what happens to single-use coffee cups," says Jorden.

"They can see they’re made of cardboard, and they think they can be recycled."

Yet many single-use cups are put into recycling bins, contributing to high contamination levels in public bin recycling.

The game-breaker for Wanaka cafes is offering a “borrow” option. Twelve cafes have got together to support a returnable cup system. For a $3 deposit, customers get an Again Again stainless steel cup to take away. The cup can be returned (clean or dirty) to any of the participating cafes, and the $3 deposit redeemed.

Wanaka broke all Again Again’s records in the first three weeks of the scheme, when 2225 cups were borrowed. Some will be with tourists who have left town but the great thing about Again Again is that it’s a national scheme, so a cup borrowed in Wanaka can be returned at participating cafes in Te Anau, Glenorchy, Christchurch, Wellington or Auckland.

Jana, of Plastic Free Wanaka, is working closely with cafes and promoting the scheme on social media. Her Wanaka SUCfree 2022 work is funded for six months by a grant from Queenstown Lakes District Council’s Waste Minimisation Community Fund.

She believes the cup-borrowing scheme fits in well with a shift by younger generations to own less stuff.

"There’s a shift to a borrowing society, where we don’t need to own so much stuff — how cool is that? Cars and bikes, that generation is happy to rent or borrow them when they need them."

Again Again cups come with a single-use cardboard sleeve to make them easier to handle. The sleeves can be recycled, but waste-free advocates have questioned whether a single-use element makes sense in a reusable cup scheme.

Jana says because the cups are made from a single layer of metal, the sleeves play a functional role for coffee without milk, as otherwise the cups would be too hot to hold.

Creative people are already finding reusable alternatives to the single-use sleeves, including adorable crocheted animal sleeves. And that’s what SUCfree Wanaka is all about, creative solutions that are more appealing than the status quo.

"It’s not about shaming people," says Jana. "We want it to be a positive experience."

Jorden agrees and believes going SUCfree will add to Wanaka’s appeal. She says Wanaka can be a leader by offering experiences instead of stuff.

"We can say to visitors, this is the way we operate. Look at our beautiful town, have a beautiful time. Enjoy it."