Torque of the town

Sarah Ford (14) leads father Chris (47) along the Ravensbourne cycleway. Photo: Peter McIntosh
It was man against machine ... or battery ...  or daughter, or  daughter and battery. It was epic, writes Tom McKinlay.

It’s a quiet late afternoon on the Ravensbourne cycleway. Most of those out on their bicycles are moving at a pace commensurate with the quality of the scenery.

Chris Ford, Cycling Otago committee member, and his daughter, also a competitive cyclist, are going head to head. And this time, Sarah has reason to believe things might be different.

All things being equal, Dad still has the edge in intra-family duels. Today, things are not equal.

Sarah is on an electric bike.

The battery snugly tucked under the carrier.
Now, electric bikes aren’t all talk, they are all torque. That’s the "force that can cause an object to rotate about an axis". In this case that force, aided by a lithium-ion battery pack, causes the bike’s wheels to rotate. Fast.

That’s why, when you’re toiling and puffing up one of Dunedin’s hills in low gear, the cyclist on the e-bike will blithely fly by. What we wanted to interrogate, with our showdown, was whether it must always be that way.

Early signs seemed to answer in the affirmative.After leaving Chris (47) in her dust on several short sprints along the cycleway, Sarah (14) put the e-bike advantage succinctly: "It made a huge difference when I was starting off, getting up to speed really fast.

"I could beat him right from the start," she said of the e-bike advantage.

However, there was also a hint in what we had observed, that the e-bike wasn’t indomitable.

A handlebar mounted read-out to display, among other things, what level of assistance you are using.
Over a longer distance, it looked like the senior cyclist’s long legs might have hauled in his daughter. E-bike motors are limited to a maximum of 300W in New Zealand, so the assistance they provide is speed-limited. The Ministry of Transport is  reviewing controls on e-bikes’ power and speed.

Chris had a particularly good view of what was going on, from just behind Sarah, and was similarly impressed by that off-the-line speed.

"It has really good pick-up," he says.

"Chasing her, if it didn’t have a speed limiter on it, then I probably would not have caught her. She was going quite strongly just over a couple of metres. She didn’t look like she was exerting herself at all. I had to really do quite a lot of work to get anywhere near her."

For all that, Chris is happy to keep pedalling under his own steam for now, saying it’s about the fitness for him.

"But if you want to do a quick commute, down to the shop or something, or along to work, I think it would be really good."

The left handle accommodates the throttle.
Sarah is also sticking with pedal power for now, but it’s clear the battery has made an impression.

"If I stopped doing it competively, I would go for an e-bike. It’s a lot of fun," she says.

"I feel like every time you got on it you would have a lot of fun."

That will be why, back at Dunedin bike business Bike Otago, half their trade is now in electrics. 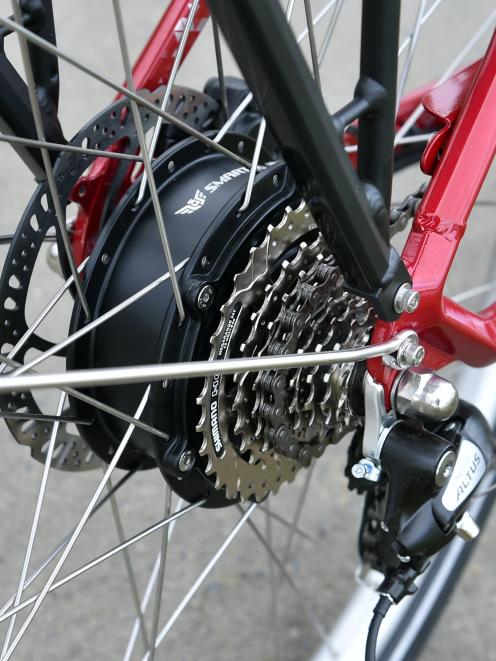 The electric motor on the rear hub.
Dunedin’s hills are well suited to a little help getting home on the daily commute, but that doesn’t appear to explain all the interest either. Sales manager Natalie Munns says electric mountain bikes are popular for the way they open up new territory for cyclists, making the inaccessible, achievable. The downhills are the same; but the uphills are a lot easier.It was a couple of Bike Otago cycles that Chris and Sarah were on, back at the Ravensbourne cycleway. Sarah’s was a $2800 Smart Motion electric commuter (you can pay a lot more than that), while Chris was on a mountain bike that sells for about $1000.

Chris’ Giant Talon II would go for as long as he kept pedalling, Sarah’s 15amp-hour battery would be good for about 100km before it needed recharging.

Munns says a a whole new group of people are taking advantage of that.

"There is no way they would have jumped on just a normal push bike and now they can get out there and enjoy," she says of e-bikes.

"So it has been really good for exercise and fitness in general."

So expect to see more of them. But keep in mind, on the flat, and with the advantage of surprise, you might still be able to catch them.