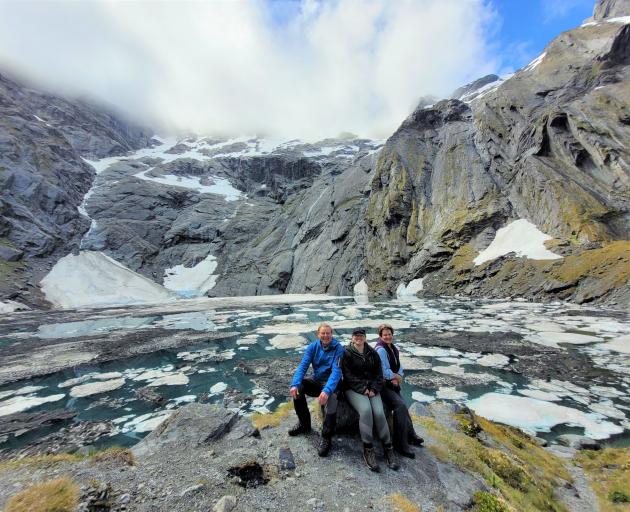 Andrew, Jessica and Kerrie in front of Lake Crucible.
A hike to South Island’s Lake Crucible fires your enthusiasm and tests your mettle - but the reward is a stunning location unlike any other. Kerrie Waterworth went to the limit (hers, anyway) to experience one of Mt Aspiring National Park’s hidden treasures.

Our wilderness adventure began early on Monday, September 20, when my phone rang. It was Jessica, our eldest daughter, ringing from England and she was in tears.

"I got one — I got a room in MIQ!" she bawled joyfully. It was two and a-half years since her dad, my husband Andrew, and I had last seen Jessica and she would now be spending Christmas with us.

Jess landed in New Zealand in early December and following her week in MIQ and several days in home isolation, we still had a few days before heading north for our Christmas gathering. How about a trip to Siberia, I suggested.

Surprisingly, New Zealand has about 16 places with Siberia in the name but Mount Aspiring National Park’s Siberia Valley, part of the Te Wahipounamu Unesco World Heritage Site, is probably the coldest and most inhospitable in winter. However, in summer this remote glacial carved U-shaped valley with its fast-flowing clear streams, pristine native rainforest and snow-capped mountains is a hiker’s paradise. Highly recommended is the one-day hike from the Department of Conservation Siberia Hut to Lake Crucible, beneath Mt Alba. 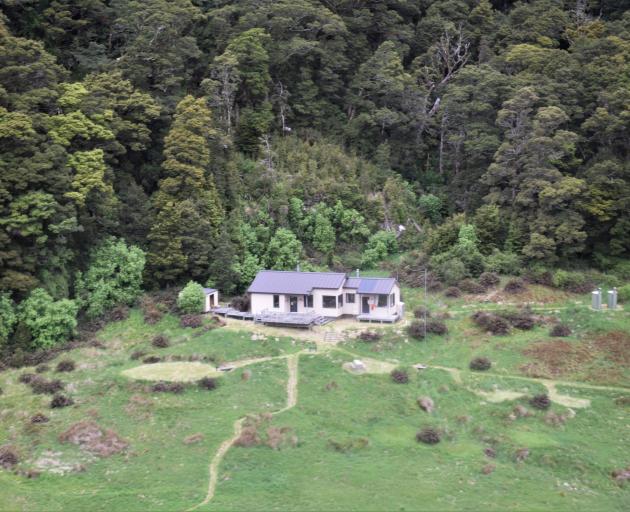 Department of Conservation’s Siberia Hut.
There are three ways to get to the Siberia Valley — by aeroplane, jet boat, or on your own two feet — and all of them start from the township of Makarora, about 60km north of Wanaka on SH6. It is a 26km hike to the Department of Conservation’s Siberia Hut from Makarora, and it involves a major river crossing, so we decided to cut out 25.8km of the hike and fly with Southern Alps Air. We booked a jet boat for our return journey the following day as it was only a 7km hike from the Siberia Hut to the Wilkin River jet boat pick-up point.

Southern Alps Air has a desk at the (recently renamed) Makarora Wilderness Lodge and that was where we found our pilot, Ryan. Our 9.30am departure was temporarily delayed due to low cloud over the Siberia Valley but after a 45-minute wait he gave us the thumbs-up. We assumed we would have to drive to an airport but no — Ryan pointed to the single-engine Cessna parked in the field on the other side of the road. Within minutes we were roaring down the grass airstrip and climbing steeply with a bird’s-eye view of the headwaters of Lake Wanaka and great swathes of flowering manuka on the lower foothills.

At the confluence of the Wilkin River and Siberia Stream we made a right-hand turn and headed up into the Siberia Valley. There was some remaining cloud over the glaciers and mountain summits, but the views of the mountains, valleys, waterfalls and streams were stunning. 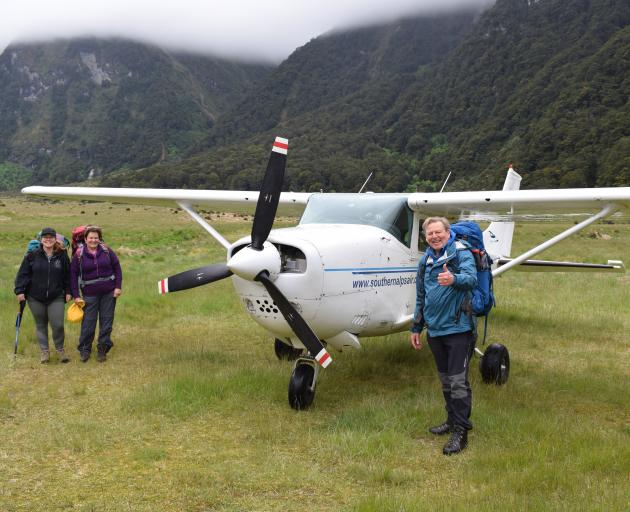 On the ground in Siberia.
Ryan pointed to what looked like an extremely short and narrow line of cut grass next to Siberia Stream, apparently a left-over from deer-recovery days. That was our landing strip and on the other side of the stream was our accommodation for the night, the 20-bed Department of Conservation Siberia Hut. Ryan flew low over the airstrip (to check for any debris) before turning the aircraft 180 degrees, giving us a view all the way up the grassy valley towards the ominously named Mt Dreadful and Mt Awful, before landing.

After taking multiple photos and videos of us beside the plane, Ryan bade us farewell and we stepped gingerly into the first, fast-flowing stream of the day. It was a calf-deep wade across before the short walk to the hut. It was now about 11am, much later than we had planned to start the 14km return hike to Lake Crucible. We quickly flung our sleeping bags on three bunk bed mattresses, grabbed our daypacks, said hi to the Doc hut warden and set off down the valley. 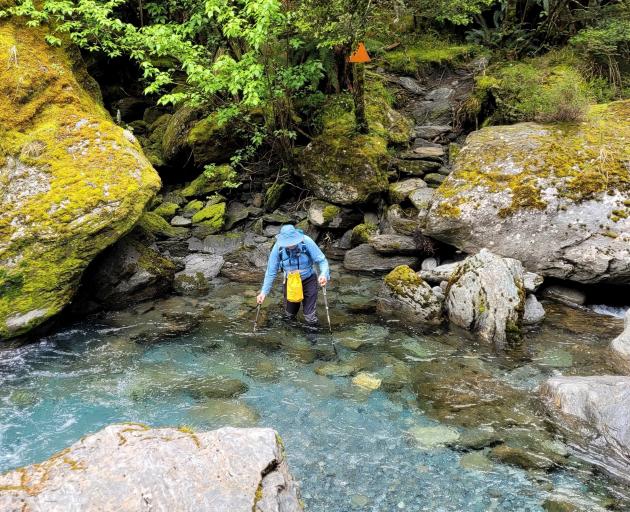 Crossing the deepest stream.
Apart from the stream crossings, the walking was mostly across river flats and although this section was relatively easy, I reflected on what it must have been like for the Maori who travelled through these mountains to the West Coast on their treks to get pounamu. European settlers also came here to mine for minerals such as scheelite and to farm. Even as late as the 1950s stockmen were driving pregnant cows up here for the summer months for calving and to graze on the long grass.

Two to three kilometres from the hut we came to a signpost in the middle of an open grassy meadow where the track divided. The track to the right went to the Gillespie Pass (1490m), part of the three-four day 58km Gillespie Pass Circuit linking the Young, Siberia and Wilkin Valleys. We took the left track, which led to another stream crossing (our fourth of the day), a view of a spectacular waterfall and a Doc sign saying, "Lake Crucible, 2-3 hours One Way".

It was now past noon — time to up the pace, or so we thought. The trail entered a dark, dense beech and podocarp forest and within metres it had disappeared under twisted and tangled tree roots. We knew the trail went up a mountain spur but this was no longer hiking — we were climbing! Using our hands and feet we grabbed, pulled and heaved ourselves up past the trees, roots and rocks. The gritty trail wound its way steadily upwards, and if it wasn’t for the orange triangular markers on trees we would never have found our way. 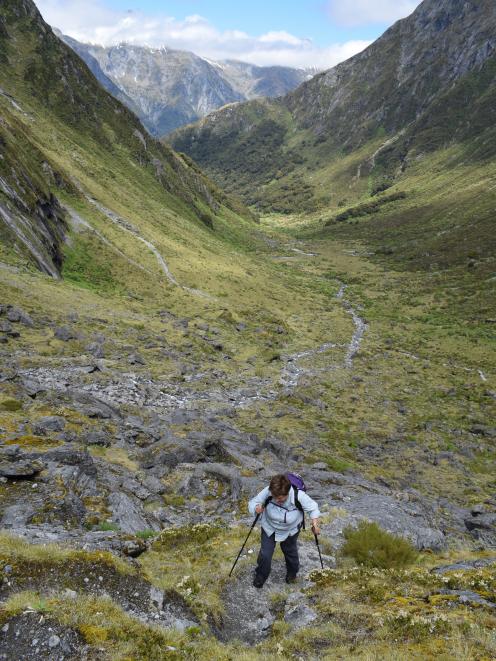 Kerrie makes her way up the moraine wall.
Dripping with perspiration we stopped for a ‘‘chocolate break’’ at what we thought must be near the summit, but we were wrong. It was another long climb before the track finally sidled around the spur and we eventually arrived at the Crucible Stream crossing — waist deep for some of us! It was now well after 2pm. Crucible Stream marked the end of what would be the hardest section of the hike but from where we were standing Lake Crucible looked an awfully long way. There was nothing for it but to press on. We were exhausted but determined to get to the fabled lake.

Fortunately, the trail rose gently through an alpine meadow to the natural moraine wall holding the cirque lake. Unfortunately, it was a goat track winding its way around and in between large rocks. I have to admit I literally hobbled up this final section; but then we had to climb what seemed the near-vertical moraine wall of the cirque. It was worth it though. When I took that final step up to the rim the view was jaw-dropping.

A hundred or more mini-icebergs floated on the surface, while on the far side of the lake a glacier carved fresh icebergs into the dark murky water. Waterfalls tumbled down sheer rock faces and above it all Mt Alba, its glaciers and its snowfields, lay hidden beneath a blanket of cloud. 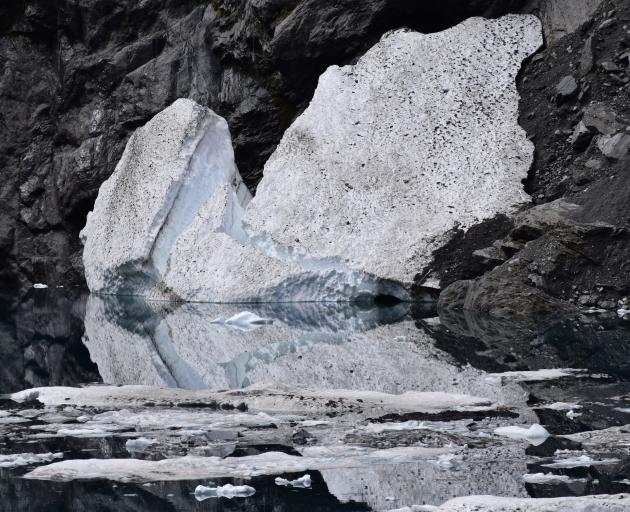 Ice at the edge of the lake will soon join other icebergs on the lake.
We ate our lunch mesmerised by the view and, as if on cue, the clouds lifted and the sunlit summit of Mt Alba appeared. Not long after we heard ice cracking and to the left of Mt Alba an avalanche of snow and ice tumbled from a high glacier shelf into the lake. Amazingly, a rare and endangered male South Island rock wren fluttered by, but it disappeared over the moraine wall before any of us could take a photo.

We checked our watches — it was 4pm and time to go. Heading down the rock wall and through the alpine meadow was made easier by the spectacular views down the valley. However, the beech forest descent was as hard going down as it was coming up, and I spent most of it sliding down on my backside. As an incentive to keep going we promised ourselves a 30-minute break at the bottom, but by the time we emerged from the forest the sun was casting long shadows on the mountains, so Andrew suggested we press on.

It was 8.30pm by the time Jessica and Andrew arrived at the Siberia Hut and past 9pm by the time I finally slipped the pack from my back, kicked off my boots and eased myself down on to one of the hard wooden benches on the deck. We were not alone. Other hikers staying in the hut that night were on the deck finishing their dinner, swatting the sandflies and chatting. The warden came over to me and said quietly two separate hiking groups we had passed earlier in the day had offered to go look for us when we had not returned by 8pm! She said she declined their offers as she "always knew we would make it back before sunset". Only just! Luckily, it was almost the summer solstice so sunset was still another half an hour away, just enough time to brew tea and dinner — with the aid of a torch.

Jessica is back in England, and we have long recovered from our aches and pains. Perhaps more importantly, I have since found out the Lake Crucible return hike is listed on various websites as "difficult" and "challenging". The same websites also estimate the hike to take roughly six to eight hours. It took me 10 hours. So do I regret going on the hike? Absolutely not. Would I do it again? Absolutely yes ... but, but, but, it would have to be with the caveat of me being much fitter and starting the hike earlier in the day. Mt Alba and Lake Crucible are like nowhere else in New Zealand and as the websites also say, it is one of this country’s off-the-beaten-track hidden gems.

--  Kerrie Waterworth is a Wanaka-based writer.