A city of architecture 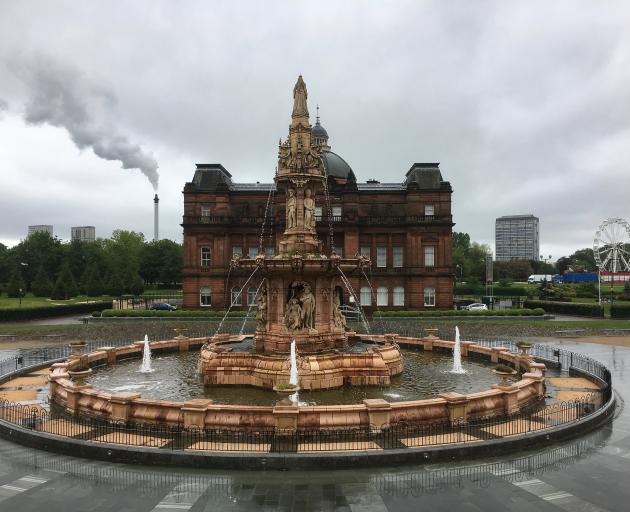 The Doulton Fountain, designed to commemorate the Queen's Golden Jubilee in 1887 along with the 1898 People's Palace, designed as a cultural centre for the people. Photos: Julie Orr-Wilson
The city Charles Rennie Mackintosh helped to build is full of marvels, writes Julie Orr-Wilson.

"You must behave, just for two days, then the wilds of Scotland will be yours," I instructed my travel companion before leaving for Glasgow. It's an odd demand but there's a fairly fresh memory of the wobbly thrown in Paris. In Paris! The most romantic city in the world! 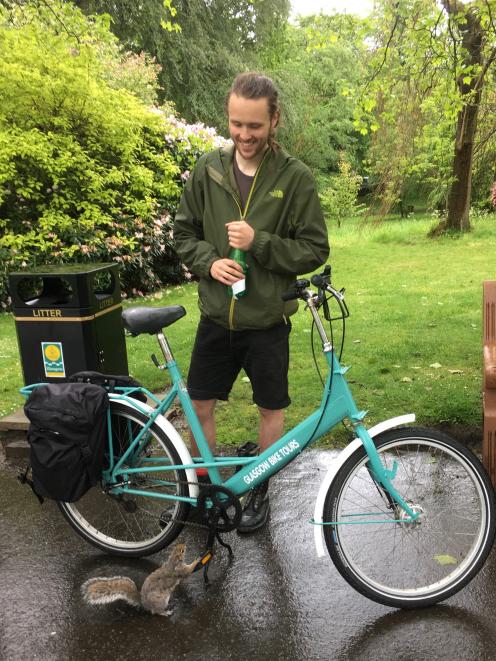 Our knowledgeable Glasgow University maths student guide Tom in the Botanical Gardens.
Understandably, even the prettiest of historic places, filled with tourists, can wear you down, but I wished for none of this in Glasgow.

A gentle and rewarding introduction to the city came from our Glasgow Bike Tour on decommissioned Post Office bikes. Our guide, Tom, explained the company's social enterprise. Many of these 5000 bikes are serviced and shipped to Malawi to provide families with transport to go about their daily lives. This was one of many social enterprises we would discover on our trip.

Heading down High St to Glasgow Green, home of festivals, bagpipe championships, picnics and parades, we are stunned by the scene that lies ahead - Templeton On The Green and the People's Palace, spectacular architectural masterpieces.

Glasgow feels misrepresented as an industrial city. There is so much beauty to behold. Locals claim Edinburgh is the tourist city but Glasgow is the "real" city. Already I'm enamoured and inclined to agree.

Three hours' biking takes us all over town. It's a dizzying list but a good way to find our bearings. Along the Clyde, the Finnieston crane. I look longingly at the Titan Crane but unfortunately it's indefinitely shut. The Armadillo Auditorium. The Science Centre. Past defunct ship yards and The Tall Ship maritime museum.

Rogue Oner's Crazy Cat Lady, on Sauchiehall St, a recent addition to the outstanding street art in Glasgow.
It's a grind without gears up Gilmore Hill to the campus of ancient Glasgow University. The quadrangles and cloisters are like a visit to Harry Potter's Hogwarts, all Gothic in style. Past the favoured Gilbert Scott Building; over its doorway the university motto rings out, Via, Veritas, Vita (the way, the truth and the life). Below, Kelvingrove Art Gallery and Museum. Beyond, wonderful city views.

With Glasgow Botanic Gardens as our backdrop, including the fantastic glass structure of Kibble Palace, Tom rewards us with a Tunnock treat (the Scottish Mallowpuff ) and an explanation of the old railway line, now a fenced feature running through the grounds. 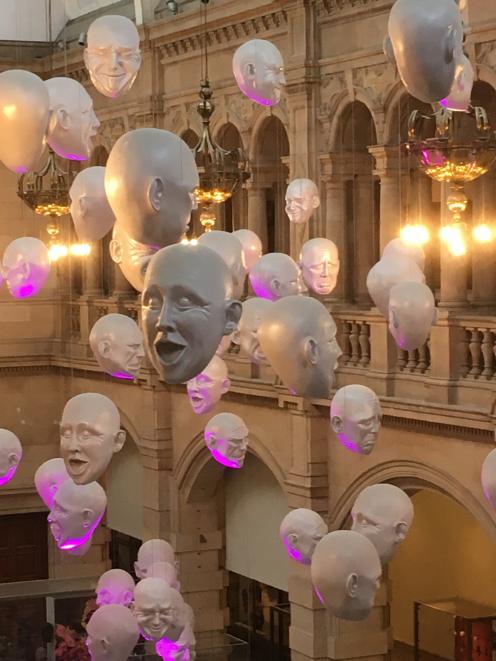 Sophie Cave's Floating Heads, at Kelvingrove Art Gallery and Museum.
Then, at last, Mackintosh. First up, Queen's Cross Church, in Maryhill, which is home to the Charles Rennie Mackintosh Society. We take our time viewing his expressions of love for and mastery of architectural ornamentation. There are carved capitals, traceried windows, carvings of flowers, birds and leaves, the influence of Japanese and Baronial-castle style.

On the edge of the city it's an easy bike path on the Forth and Clyde Canal, so peaceful, through wetlands to Speirs Wharf. Historically, this area was central for Glasgow's sugar refinery, grain mills and warehouses, now redeveloped as upmarket apartments and canal boat dock.

As our daily dose of rain belts down, we make Glasgow Cathedral, the mainland's oldest. Tom quickly explains the symbolism of Glasgow's coat of arms - the robin, fish, bell and branch - and how it relates to the miracles of the Patron Saint Kentigern, fondly known as Mungo.

Next the Necropolis, modelled on the Parisian Pere Lachaise cemetery, the most arresting, hauntingly beautiful spot on the trip.

Billy Connolly suggests, "Glasgow doesn't care much for the living but certainly looks after the dead". There are many notable statues and sculptures, including Mackintosh's first commission, a Celtic cross.

I like the useless fact that "Wee Willie Winkie's" author, William Miller, is buried here. We've biked all over town in our wet weather gear rather than nightgowns. It's no joke, we end our tour at Drygate Brewery soaked and smiling.

There are many galleries, theatres and parks to visit in Glasgow but with limited time I'm intent on adhering to my Mckintosh theme. Visiting Charles Rennie Mackintosh is a good guide to the extensive range of his architecture. I concentrate on a few.

House for An Art Lover, in Bellahouston Park, built in 1989, and based on unrealised designs of Charles Rennie Mackintosh.
House for an Art Lover is intact, but plans to visit Hill House, in Helensburgh, are scuttled as it's being "boxed" for moisture maintenance, long overdue. Glasgow School of Art is burnt, as a result of a fire last year, and I can't bear to look. 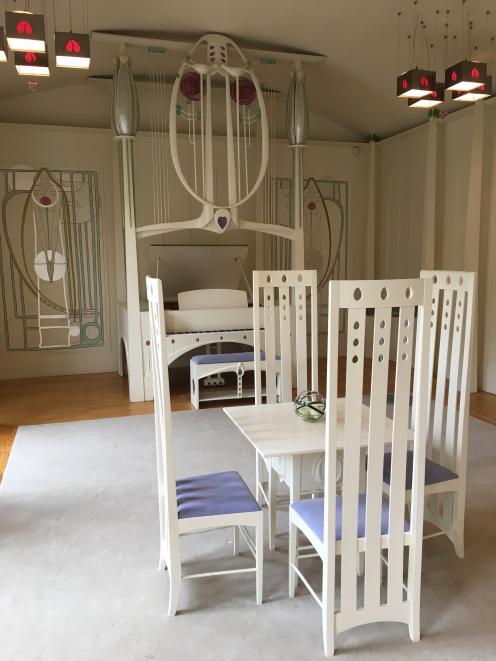 The music room in House for An Art Lover, wood panelling insets, gesso panels and organic motifs exemplify Mackintosh's flowing, floral design style.
House for an Art Lover is based on a design Mackintosh entered in the 1900 Vienna Secession exhibition, where it was awarded a consolation prize, winning respect for the Scotsman from his European peers. Construction based on a 1901 design did not begin until 1989. I linger here, until closing, an experience akin to Herman Muthesius' description in 1904: "The creations of Mackintosh breathe when one sees them in reality, a soulful depth and a nervous delicacy of feeling, that ranks them with the most spiritualised creations of art in our time".

We have an early breakfast booking at Mackintosh at the Willow, original tearooms where the full Scottish breakfast includes haggis and a tattie scone. I opt for the Scottish salmon but there's little resistance to the addition of treacle gingerbread, along with Duchess Grey tea in Burleigh willow china.

Tearooms became fashionable in the 1880s and one Kate Cranston led the field.

Mackintosh was favoured as the architect for her custom-built tearoom on Sauchiehall St. Its meaning, "alley of the willows", inspired the theme. In vogue during the early 1900s, it had a chequered history before it reopened in 2018 as a social enterprise for young people.

The Hunterian, Scotland's oldest museum and art gallery, houses one of the most important collections of Mackintosh and his artist wife Margaret. That includes Mackintosh House, a reassemblage of the principal interiors from their original Glasgow home, which stood only 100m away.

There is furniture, fabric and fixtures, some original, all Mackintosh designs. It is not to be missed.

The finale is Kelvingrove Art Gallery and Museum, an outstanding combination. The setting is sublime. It houses the largest permanent display about Mackintosh, an informative record of the Glasgow style. My only complaint is that wife Margaret's talent and contributions to Charles' fame seem rather overlooked.

My priority shifts to Salvador Dali's St John of the Cross. I refrain from watching the video on the repair after an attack, it seems a distraction from time spent in this darkened recess taking in the work. "People love mystery and that is why I love to paint," Dali is quoted.

As I descend the stairs of the Kelvingrove, an organist is taking his seat for the daily recital and Sophie Cave's Floating Heads beam across at me. I think: "There is nothing wrong with Glasgow, Glas Cu, `dear green place'. Not far away, home of my ancestors. I'd like to live here."