Far away yet oddly familiar

Stephanie Holmes at the Painted Hills. PHOTOS: STEPHANIE HOLMES
Stephanie Holmes takes the roundabout route to experience the many natural and man-made delights of Eastern and Central Oregon.

It reminded me of Queenstown in late autumn. The red, gold and yellow foliage reflected in the crystal-clear icy lake. Roaring open fires with happy groups of tourists and locals crowding around for warmth. Packed restaurants and bars - from the cheap and cheerful to award-winning fine dining.

Bend, Oregon was a lovely place to be, and felt strangely like home.

Why travel halfway round the world to feel at home, you might ask.

For most Kiwis, the journey to Bend will run through Portland, the famed hipster city where anything - particularly beards, man buns and tattoos - goes. After four nights in the urban landscape, I was ready to venture further, and luckily Oregon is the perfect state for a road trip.

You can get to Bend in about three hours, either driving or taking a direct coach journey. But to do that would mean you miss out on the many other delights of Eastern and Central Oregon.

The state is marketed as having seven must-see natural wonders - Columbia River Gorge, Crater Lake, Mt Hood, the Painted Hills, Oregon Coast, Smith Rock and the Wallowas - and our road trip allows us to see four in as many days.

It's the kind of driving that gives a real sense of just how big the United States is. We drive for hours each day, and there's always something to see from the car window, but it's never the coast. There's the craggy grandeur of the Columbia River Gorge - a natural border between Oregon and Washington State; the High Desert Plains stretching as far as the eye can see, inexplicably turning to dense forests or towering rock formations around a corner. 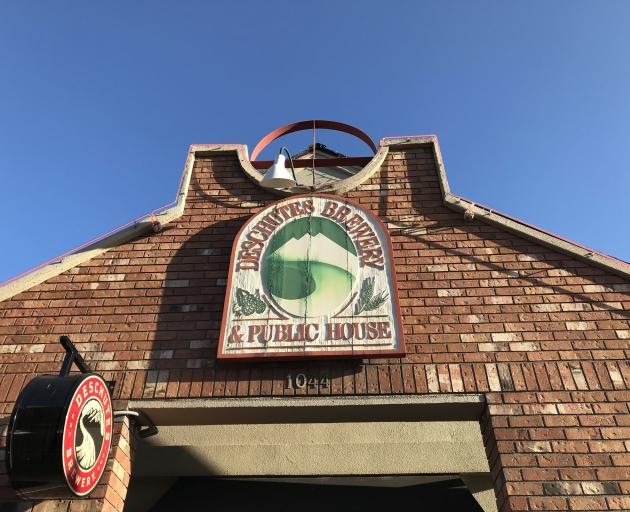 Deschutes Brewery in Bend.
We get halfway across Oregon, and there's still 10 more states, and five more days' worth of driving, to get to the Atlantic coast.

Much of our road trip takes us along the historical Oregon Trail, the route fur traders and settlers made on foot, horseback and, eventually, wagons in the early 1800s. It's estimated more than 400,000 settlers moved through the US on this trail, from the Missouri River west to the Oregon Coast, establishing along the route many of the cities of today.

We spend our first night in The Dalles (population 15,600), after a pleasant drive through the Gorge.

I've already filled up my Instagram feed with posts from Multnomah Falls - the Pacific Northwest's most visited natural attraction; Cascade Locks, where, on the Bridge of the Gods, Cheryl Strayed (played by Reese Witherspoon in the movie adaptation) ends her journey in her memoir Wild; and Hood River Town - an easy weekend getaway for Portlanders, with a burgeoning brewery scene and access to three ski resorts on nearby Mt Hood.

The Dalles is sleepy on this Sunday afternoon: "it's so quiet they don't even turn on the traffic lights,'' says the Portlander I'm travelling with. The city's name comes from the French word "dalles'', meaning slabs, and refers to the impressive basalt rock formations either side of the Columbia River.

This place was a major Native American trading area for 10,000 years and is one of the most geologically significant regions on the West Coast. It's brimming with charm.

There's Klindt's Booksellers - the oldest continually running bookstore in Oregon, due to celebrate its 150th anniversary in 2020; Freebridge Brewing, a craft brewery in a heritage building; and, if visiting Thursday to Sunday, there's the National Neon Sign Museum. 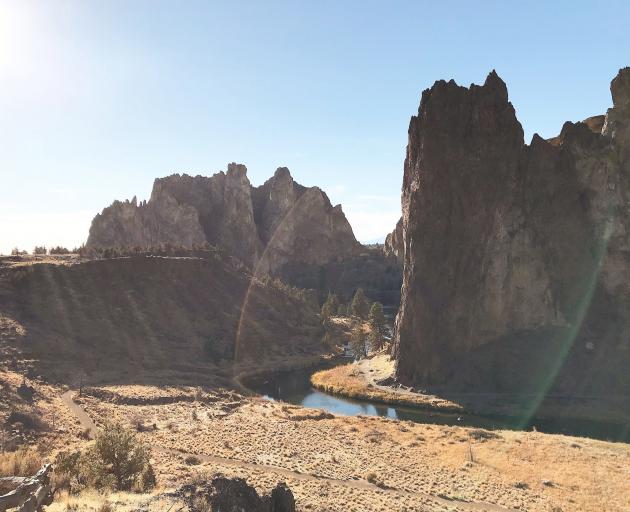 Smith Rock State Park
The Gorge is also a wine-growing area, and we pop into Sunshine Mill Winery. Inside a 130-year-old former flour mill, it's the only designated skyscraper in The Dalles. The current owners saved it from demolition, turning it into a tasting room and event space, and it's now on the National Register of Historic Places, an official list of the US' places worthy of preservation.

The light-filled tasting room is warm and cosy, and the deal offering a taste of five wines for $10 is hard to pass up. Spencer, working the tasting room that day, is a sixth-generation Oregonian, whose ancestors constructed many of the old buildings in town. He's never left the US, and rarely leaves Oregon. With the surrounding natural beauty, I'm starting to understand why.

Oregon's draw extends to those from other states,too. In Echo, just a couple of hours' drive from The Dalles, we meet Jay and Kim Bales, former Seattle natives who moved to this tiny "city'' to fulfil Jay's dream of owning a vineyard.

The landscape changes dramatically in our two-hour drive to get there. The freeway follows the path of the Columbia River, with Washington State to the left and the rugged basalt cliffs of the Cascades to the right. Mile-long freight trains thunder alongside us and, across the river, giant wind turbines are dwarfed by the never-ending hills.

Past the Cascade Range and entering Eastern Oregon, the basalt cliffs disappear and suddenly there are flat plains stretching far into the horizon. The climate changes too; where Portland is often rainy and grey, here we're in the high desert where the sun always seems to shine.

Echo Ridge Cellars is on the outskirts of Echo, another sleepy settlement with scores of heritage buildings just begging for redevelopment. Echo Ridge is one of two tasting rooms in town, but Kim swears there's no competition between them. If you're in town visiting Echo Ridge, she'll send you to Sno Road wines, and vice versa.

The Bales have done their bit to restore and revive the heritage in the area - their tasting room building is an old grain elevator, built in 1945. When they bought the property in 2010, it was full to bursting with pigeon poo and dirt. Jay thought she was crazy, but Kim had a vision and after painstaking work, it's come to fruition. The building is now a beautiful light-filled space, with some cool original features, and the wines are particularly good. 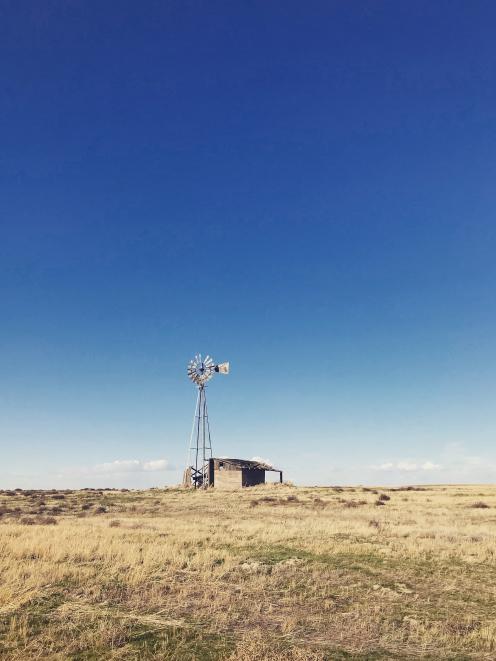 The flat plains of Echo
The journey continues and we're on the home stretch to Bend.

The roads wind through farmland and flat plains in all directions, with the snowy peaks of Mt Hood and Washington's Mt Adams in the distance.

We turn on to the Blue Mountain Scenic Byway, and travel through the cities of Lexington (population 237), Spray (population 150), with its aptly named grocery store The Lone Elk, and Heppner (population 1268), where a flood wiped out the town in the early 1900s and left only City Hall standing.

The landscape changes many times in just a few hours' drive. There are winding mountain roads lined with ponderosa pines, long desert plains dotted with monumental rock formations, then the perfect curves of the John Day River.

The Painted Hills necessitate a 10km detour, but it is totally worth it; I've never seen beauty like it. Part of the John Day Fossil Beds national park, these undulating hills are made up of different types of soils and ecosystems, some dating back 40 million years. The area is of huge significance to paleontologists - Remains of early horses, camels and rhinos are among the 40,000 fossils already discovered here.

To see the Hills is a wonder in itself. Soil erosion has revealed layers of rich colours that change with every shift of cloud and light. There's more natural wonder at Smith Rock State Park, where sheer cliffs of tuff and basalt rise vertically from the Crooked River Canyon, providing world-class rock climbing and an abundance of hiking trails. Park the car (a $US5 [$NZ7.40]permit is required) and stretch the legs - come early to hike the trail to the summit to see sunrise, or simply take a seat and gaze a while in awe.

And then we're in the relative bustle of Bend (population 87,000), surrounded by mountains and fresh air; breweries and restaurants; skiing and snowsports in winter; hiking, kayaking and rafting in summer. Like Queenstown, it has something for everyone.

I wander the charming downtown streets and get lost among those who have come from far and wide. The destination has been worth the journey. But the journey was worth it, too. - The New Zealand Herald

Getting there
United Airlines flies from Auckland to Portland and Redmond (just outside Bend) via San Francisco. Return economy fares to Bend are from $2158. united.com

Five things not to miss in Bend

Breweries
There are more than 20 breweries in Bend, and new ones opening all the time. In fact, Bend (population 87,000) has more breweries per capita than any city in Oregon. One of the first in town was Bend Brewing Co; the largest is Deschutes, named after the Deschutes River; and — at the time of writing — the newest is Boneyard Brewing, which now has two locations in town.

Box Factory & Old Mill District
A trendy new area, just a few minutes from Downtown Bend. It was once an important area for the logging industry and a revitalisation project has made use of salvaged materials from derelict buildings, such as wood beams, old sidings and concrete floors, to give new life to a heritage area. Now you’ll find breweries, cideries, cafes, shopping and restaurants.

McMenamins Old St Francis School
This former Catholic School-turned-brewery, restaurant and hotel is one of the most interesting places I’ve ever stayed. McMenamins is a family-owned chain of brewpubs, breweries, music venues and heritage hotels in the Pacific Northwest, and its restorations are done with wild innovation and painstaking attention to detail. Old St Francis School is packed with brilliant features — eclectic artworks, a pub, brewery, movie theatre, regular live music, a soaking pool, outdoor fire pits and a number of secret rooms, including a Prohibition-style speakeasy. Even if you’re not staying overnight, spend a couple of hours here and explore.

Lava Tube Cave Tour
Just under the surface of the earth on the outskirts of Bend lies a network of ancient lava tube caves. While there are caves that can be explored without a guide, I would highly recommend going with Wanderlust Tours. These caves are dark and claustrophobic, requiring some scrambling to get through. It would be easy to become disoriented, or badly hurt. We explored Boyd Cave, 18m deep and 560m long, officially discovered by John Boyd in the 1920s, although it had been used by Native Americans for thousands of years. The caves are an important habitat for white-nosed bats, which hibernate here.

High Desert Museum
Take a walk through a few hundred years of high desert settler history at this excellent museum that brings the region’s past to life. The Smithsonian-affiliate museum sits within a forest of ponderosa pines, and there are beautiful paths between exhibits taking you through the trees. Live exhibits include a bobcat, birds of prey and porcupines, rescued after injury or being kept illegally as pets. There are more than 18,500 artefacts in the collection, so dedicate some time for a good look around.