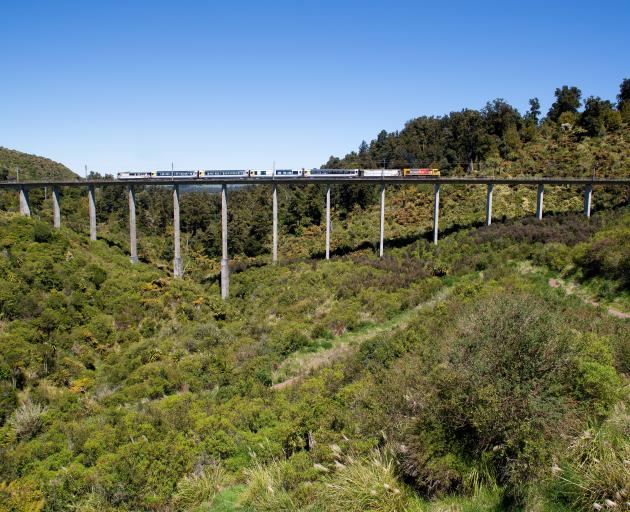 Among the highlights of KiwiRail’s Northern Explorer are the viaducts spanning the deeply indented hill country.
Is flying the only feasible way to travel the length of the country? Peter Dowden tried the slower option.

There should be a bumper sticker: I beep for birds.

As we travelled through Marlborough’s parched farmland, the Intercity coach driver would occasionally let out a salvo of beeps on the air horns. I assumed he was greeting his farming mates alongside the highway until on one long stretch I spotted a hawk tearing at some carrion on the road ahead: another couple of horn blasts, the kahu looks around, then lifts off in plenty of time to escape the oncoming vehicle.

"You just proved that birds can hear," I remarked to the driver.

"I’m part of an organisation that rescues and rehabilitates injured birds," the driver explained. "One time driving through here, I saw a car hit one, and I stopped the coach to go and check it out. It was OK — it took off just before I reached it. The passengers thought it was all a bit funny."

Well, who knew? Bus drivers have things they do in their spare time.

‘‘Gold’’ class is similar to domestic business class on an airliner.
I was on the second-last leg of a hectic overland (and sea) dash from Dunedin to Auckland and back for a business-related meeting. My objective: to see how feasible it is to follow the example of Swedish teen Greta Thunberg and other climate activists and environmentalists who have renounced flying. I was to spend about 46 hours in a seat, and six hours strolling around a ship. Greta love hath no man than this.

One trick to a long overland trip is to travel partly by night. Since we don’t generally do much when it’s dark anyway, it counteracts the time-consuming aspect of slow travel. So I got a mate to drop me off in Hornby at the crack of dawn. That’s almost Christchurch and I had three hours to walk to the station, in not-so-distant Riccarton. What could possibly go wrong?

Two hours and 55 minutes later, I was on some sort of motorway overpass above the station. Cars and trucks were whizzing past on the footpath-less carriageway. I looked down at the locomotive driver, waving my ticket above my head but he dutifully avoided my gaze, working on his pre-departure tasks. I trudged around three sides of an enormous hardware store and leapt on to the train as they were blowing the whistle.

The Intercity terminal in Auckland, perhaps the world’s only coach station inside a casino.
Christchurch Station is on prime retail real estate in the heart of a bustling car-oriented shopping centre in a strictly bus-free zone. I am not sure if it is actually compulsory to arrive by taxi, but that is the only method I can see would ever actually work, so that’s certainly what I would do next time.

Moments later, the Coastal Pacific was zooming through Christchurch’s northern suburbs through a white candyfloss of ground fog as the sun rose over Pegasus Bay. It was very pretty.

These are not the rickety NZR carriages of old. Made in Dunedin’s Hillside workshops, they are as smooth and comfortable as any train I’ve ever travelled on. Airbags underneath provide a magic-carpet ride. The knee room would suffice for an 8-foot basketballer. And, most amazingly of all, we didn’t seem to be travelling as dreadfully slowly as we actually were.

So sumptuous are the carriages that KiwiRail provides a super-elite travel class, costing about $100 more, which uses exactly the same accommodation, just providing fancy food with at-seat service. Having worked out that those people didn’t get to go any faster, I opted for the standard fare.

Some might think of crossing Cook Strait as a bit of a chore, but people pay good money for a similar experience on a cruise ship. Watching the passing landscape of emerald hills plunging into turquoise water, it’s hard to think of anything better to be doing. Not to forget I’m about to spend a day at a meeting in a windowless room. 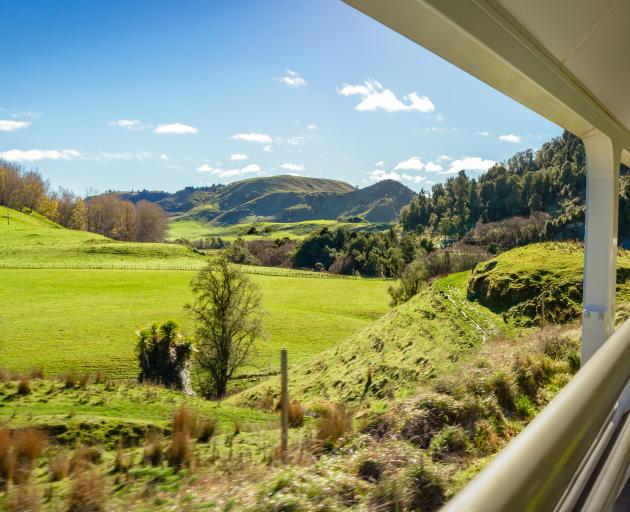 If you like grazing animals, weatherboard cottages and native forest, there’s plenty to please the traveller.
A short night’s sleep later, Wellington is just getting up as we board the next train leg, on KiwiRail’s Northern Explorer.

This train only travels in one direction per day, so it needs advance planning. All of the above applies as far as the on-board experience goes.

Highlights of this leg are the viaducts spanning the deeply indented hill country, the places where Maui’s fish was hacked by his jealous brothers, then opening up on to the volcanic plateau with its spectacular peaks. If you like grazing animals, weatherboard cottages and native forest as much as I do, there’s plenty to please the traveller.

Gliding through the Waikato we passed brand-new stations for their new commuter train, then we shot through South Auckland at quite a remarkable speed. An unexpected bonus was reaching the city the long way around, via Orakei and the waterfront, quite a nice way to arrive at Auckland’s aptly-named Strand station — like Christchurch’s it is about as far as possible from any local public transport.

Nothing much to say about the meeting I attended the next day, but I did think I felt more relaxed than those who bustled in from the airport at the last minute.

Immediately after the second day of business, I took on the most ambitious leg: the overnight highway coach to Wellington. I checked in at the Intercity terminal, perhaps the world’s only coach station inside a casino, armed with sandwiches and bottles of water for the gruelling 11-hour journey.

To maximise opportunity for sleep, I upgraded myself to Intercity’s "Gold" class, similar to domestic business class on an airliner, with three seats abreast instead of four and plenty of leg room and recline (although nowhere near lie-flat). 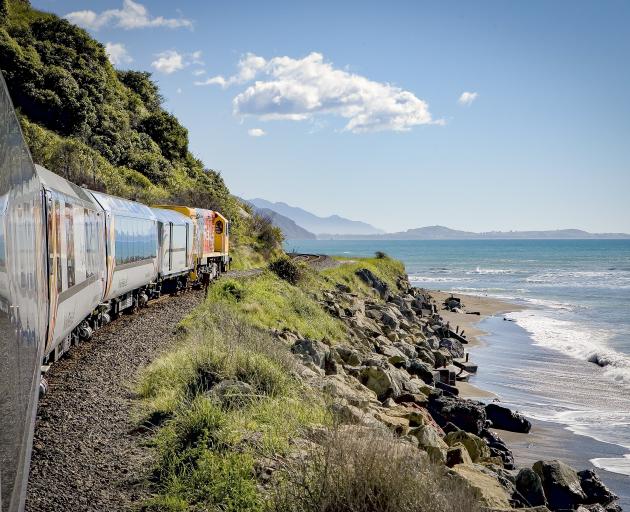 Modern railway carriages provide a smooth, magic-carpet ride.
I was very lucky to be allocated the front seat on the double-decker coach. This gave me a corporate-box view of Auckland’s Southern Motorway and the Waikato as the sun set. We visited every town that was conceivably on the way: Hamilton, Rotorua, Taupo and Palmerston North. I did (rather mean-spiritedly) wonder why we did those long diversions for so few people when most of us were going the whole way, but I suppose Intercity’s determination to get everyone home is commendable.

The approach to Wellington included the surf-lashed Centennial Highway, clinging to the foot of a cliff (Transmission Gully hadn’t opened yet), and the spectacular descent through the Ngauranga Gorge into the harbour capital, but I slept through both of these, waking only as the coach approached the city. So the seat must have been reasonably comfortable. My coach pulled into Wellington Station in good time for a fast-food breakfast and an unhurried connection to the morning ferry.

A few hours later I was travelling with the aforementioned bird-protecting coach driver, stopping for afternoon tea and a visit to the beach in Kaikoura. Coach travel is clearly not as flash as train travel but certainly more affordable. The long "refreshment" stops are irritating — perhaps these are a sort of handicap to make the competition with the trains fairer.

There is no night service to Dunedin but it was nice to stay (briefly) with family in Christchurch. Next morning we had the same bus and driver taking us further south, with time for a stroll in Oamaru and an afternoon arrival in Dunedin.

My travel cost about $100 more than flying. I’m glad I went some of the way by train, though. To do the lot by coach would be a bit much and the trains are remarkably comfortable.

It’s difficult to make a valid case for travelling for four days to conduct two days of business. If night travel were more widely available there would be more efficient connections.

But fast travel just provides more time. Time to do uncool stuff like work. If travel is enjoyable, then I say go for it.

I didn’t really know how my slightly rash decision to go by surface would turn out, but I was pleasantly surprised. There’s nothing wrong with arriving relaxed and refreshed, rather than rushed. I would definitely not, however, travel overnight to a meeting the next morning. I made sure that all my overnight stretches were followed by daylight travel.

KiwiRail’s Northern Explorer and Coastal Pacific trains will resume operations in late September 2022. If you just can’t wait to go on a train before then, the TranzAlpine (Christchurch-Greymouth via Arthurs Pass) will be running right through winter.

KiwiRail trains and and Interislander ferries can be booked at greatjourneysofnz.co.nz — it’s best to plan your Northern Explorer (from Auckland or Wellington) journey first as it doesn’t operate daily, then book connecting ferries and trains around it.

Intercity coaches can be booked at intercity.co.nz — conveniently, they also take bookings for Interislander ferries so island-hopping journeys are quite easy to plan.

It is difficult (and usually more expensive) to buy coach, train or ferry tickets other than online, so get a friendly computer whizz to help if you like.