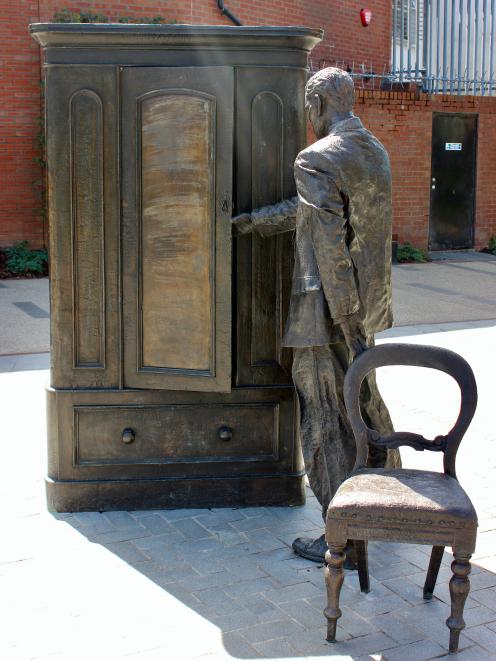 What makes a holiday memorable is not the mementoes but the people you meet.

Sometimes this is through unexpected encounters but more often it's on an organised tour - you're entrusting a professional with your precious days, hoping they will turn your payment into pleasure. Three professional guides I met in Belfast did just that.

AWAY A WEE WALK TOURS

Taking a taxi from our hotel at 5.30am means few of our group make the cut. The activity at this ungodly hour is taking a guided walk with Eimear (rhymes with dreamer, she later explains), climbing to the summit of Cave Hill Country Park to catch the summer sunrise and enjoy the expansive urban and rural views. On a clear day, you can make out the Mourne Mountains, Strangford Lough, County Down countryside, and beyond, the Isle of Man and Scottish coast.

On the slopes of Cave Hill sits Belfast Castle. Dating from 1870, it originally belonged to the Donegalls. It is now in the hands of Belfast City. It's a striking place to begin. Now a functions venue, there's also a shop, restaurant and museum. Wandering the gardens, we amuse ourselves trying to find the nine different cat features on display. It's pleasing to see our native cabbage trees have made it here. In the drizzly, misty distance Belfast is waking up. 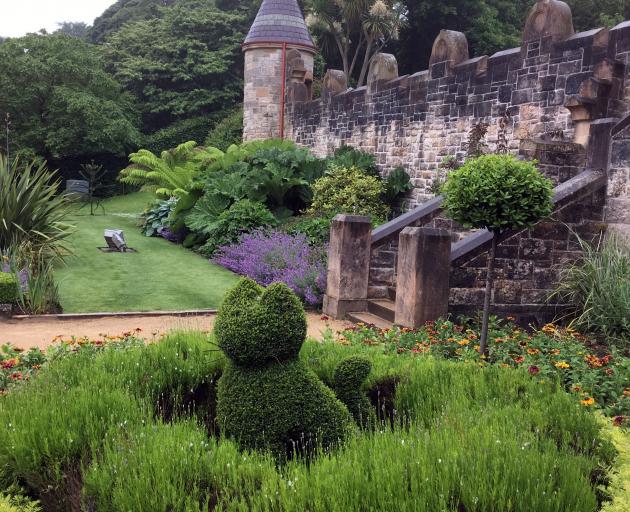 Dotted around Belfast Castle’s garden are nine different cat features to discover.
Taking its name from three man-made caves, Cave Hill is a basaltic, rocky outcrop, resembling the emperor Napoleon and known as "Napoleon's Nose". It is also thought that Johnathan Swift found inspiration here for Gulliver's Travels, the hill's shape reminding him of a sleeping giant guarding the city.

It's an easy ascent, and throughout the 7.2km round trip Eimear's commentary on natural and human history, along with her congenial company, more than makes up for the fact that for our entire trip we have been afforded zero view. Rain or shine the combination of Cave Hill Country Park, Belfast Castle and Eimear is really worth the trek.

I'm meeting Gary for the C.S. Lewis "Talking Bicycles" tour at the spanking new EastSide Visitor Centre in C.S. Lewis Square. As we share our coffee at Jack Cafe (named after the diminutive for C.S. Lewis), behind us a sculpture of mighty Aslan looks down. Gary hands me a map explaining all seven The Lion, The Witch And The Wardrobe sculptures before we set off by bike along the Comber Greenway.

As we stop at the sculpture of Digory Kirke, of The Magician's Nephew, I am reminded of Jack's quote: "Someday you will be old enough to start reading fairy tales again."

We head up the hill to the site of Jack's first home, and then to "Little Lea", the grand mansion that felt to him "more like a city than a house". Gary chats along, telling me how the Lewis family was well-connected and academic: Jack's mother Flora had an honours degree in logic and mathematics. He was also influenced by the myths and legends his nurse, Lizzie Endicott, would tell.

We stop at the Belmont Tower cafe, which contains a small C.S. Lewis exhibition, and see the original Narnia lamp-post at Campbell College, Jack's old school. It's striking that the rectory where his grandfather lived still has the original brass doorknob, with Aslan's image on it. 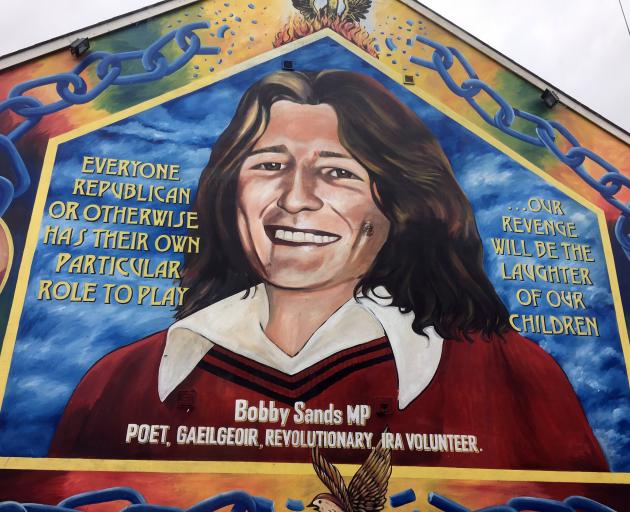 A memorial wall for Bobby Sands in Belfast.
Riding the streets of Strandtown, looking beyond to the lush views, it's easy to see why Jack was deeply proud of the place he called home. I wonder whether he would have approved of New Zealand being the setting for the Narnia films. The Mourne Mountains, County Down and Carlingford Lough were his idea of Narnia. I agree with Jack that "the countryside is very beautiful ... I should ask for no better place to live". It makes me want to unpack my tin whistle and play that haunting lilt, County Down.

I'm thinking of my primary school teacher who introduced me to the tales of Narnia. I want to find her to say "thank you". And Jack's words are playing over in my mind: "then came a time when to have a bicycle, and to have learned to ride it, and to be at last spinning along on one's own, early in the morning, under trees, in and out of the shadows, was like entering Paradise".

Billy Scott picks us up in a "London Black Cab" taxi. I'm so pleased, never having ridden in one of these classics before. Billy claims gaining his Blue Badge Tour Guide qualification was more difficult than completing his sociology degree.

Most visitors are pretty interested in The Troubles and taking Billy's political tour around North and West Belfast seems an obvious choice. In his book on Northern Ireland, Marc Mulholland writes that "Northern Ireland in 1968 proved that even liberal democratic institutions and a standard of living enviable in all but the wealthiest countries were no proof against ethnic conflict in the contemporary age". 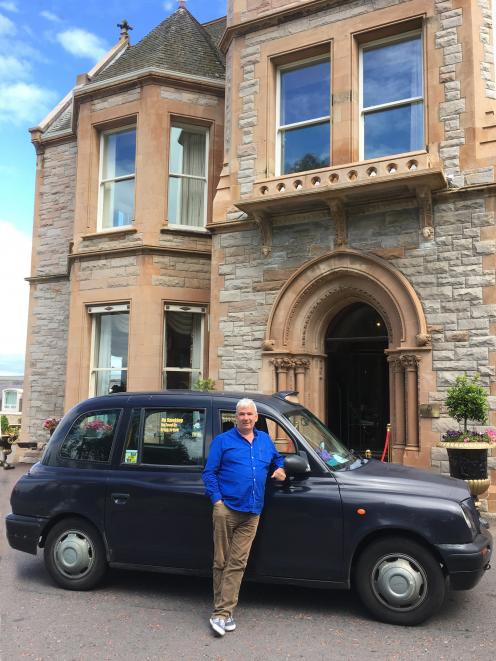 Billy Scott and his ‘‘London Black Cab’’.
Billy takes an unemotional, pragmatic view of this time in his childhood, explaining that he was "desensitised by the Troubles. I just avoided standing too close to my father, who always carried two guns".

In his dry commentary, Billy drops in the fact his father's own pub was bombed but shrugs: "there's not a lot of difference between Pulp Fiction and Irish history. In both there's blood and gore, and they all die." We pass by where I'll stay the following day, the central city Europa Hotel. During the '70s it suffered 38 direct bomb attacks.

There are good things too. Harry Massey invented the Massey Ferguson tractor. Dunlop, in 1890, created the pneumatic tyre. John Ballance, of Antrim, became New Zealand's 14th premier and hugely influential in the advocacy of women's suffrage. There's a concert hall that rates in the top two in the world.

Out in the suburbs we view a mix of Loyalist, Republican and social/cultural murals.

When Margaret Thatcher placed an embargo on live broadcasts during the Troubles in the '80s, the murals became a way of communicating. One Republican mural focuses on the hunger strikes and Bobby Sands. In the Loyalist community there's a traditional focus on William of Orange. It's really hard to take all of the Troubles in. I feel voyeuristic from the comfort of the taxi when there's been so much loss and pain.

We weave through the streets and the Belfast landscape of "peace walls", originally built by the British army to manage sectarian conflict. We pull up by the well-known Shankill peace wall, built to separate Protestant and Catholic areas. When Billy hands us each a black vivid marker to "tag" the wall, I'm stuck for words. Someone before me has written, "where ignorance is our master, there is no real possibility of peace".

"Northern Ireland's tragedy is that its people have not been able to agree upon a common identity," says Oxford professor Marc Mulholland.

What is beautiful is they are beginning to find a way forward.