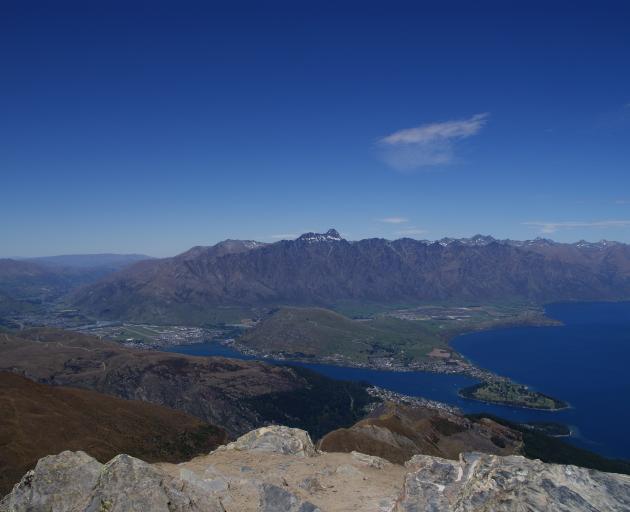 Queenstown and the Remarkables viewed from the Ben Lomond summit. PHOTO: ALINA SUCHANSKI
The track to Ben Lomond - a prominent mountain in Queenstown towering 1748m above  sea level - is described on the Department of Conservation website as "a demanding climb and a full day’s hike with a 1438m elevation gain. On clear days trampers are rewarded at the summit with spectacular panoramic views". Alina Suchanski went to check it out.

When William G. Rees and Nicholas von Tunzelmann reached the top of the Crown Range after a long and arduous journey of exploration from Dunedin to the West Coast in 1860, they were the first Europeans to see the magnificent view of Lake Wakatipu and surrounding landscape.

Legend has it that they tossed a coin to decide who would have which side of the lake. Whether that is true or not, Von Tunzelmann got rights to Fernhill Run on the western shore of Lake Wakatipu, including Mt Nicholas Station, while Rees ended up with a massive holding to the east and south of the lake, from Arrowtown down to Kingston, including Coronet Peak, Ben Lomond, the Remarkables and Ben Nevis. 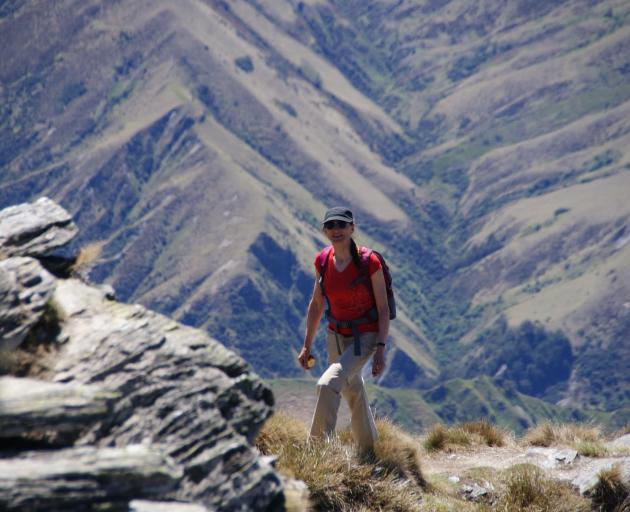 The author near the top of Ben Lomond. PHOTO: CHRIS BALLS
None of these peaks would have had their European names yet. Some 50 years later Southland-born historian Herries Beattie spent considerable time travelling the South and talking to Maori elders about the naming of places in Te Wai Pounamu (South Island). He records that the mountain Ben Lomond was known by the local Maori as Te-taumata-oHakitekura, the eyrie of Hakitekura, named after a girl who sat on the mountain and watched other village girls have swimming competitions in Lake Wakatipu.

Ben Lomond was given its English name by Duncan McAusland, one of Rees’ shepherds, who named it after its namesake from his home country, Scotland. Early on in Queenstown’s history, Ben Lomond became a attraction for adventurous tourists due to its height and relative accessibility. It was quite the done thing to leave Queenstown several hours before dawn, walk to the top of the towering peak and wait for the sun to rise.

In 1916, the Lake Wakatipu Mail reprinted an article from the Evening Star by Amber Lloyd in which she says: “It is probable there is no peak of the same height in New Zealand more climbed than Ben Lomond. Every visitor is expected to ‘go up Ben’ and the few who do not make the ascent miss a great deal.”

This climb had been on my list for a very long time so, as a member of the Fiordland Tramping and Outdoor Recreation Club, I put up my hand to lead a trip up Ben Lomond. We set the date for early November deciding to go to Queenstown the day before, so we could start nice and early the following morning. That was the theory anyway. 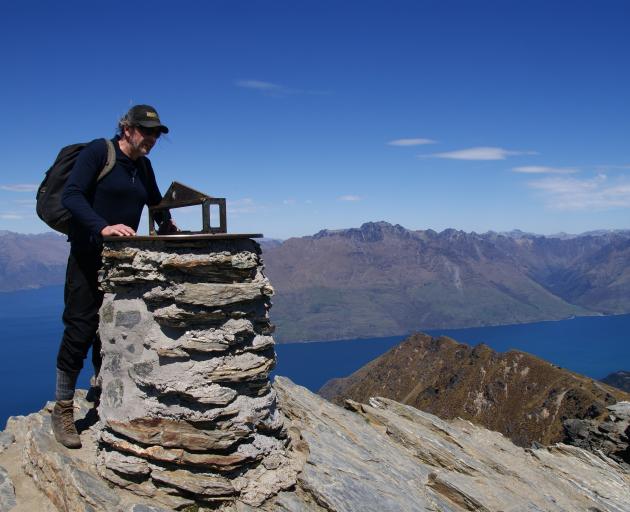 Chris at the visor on top of Ben Lomond. PHOTO: ALINA SUCHANSKI
Only one person was able to join me on this trip midweek, when the weather forecast was perfect for climbing mountains. We left Te Anau at 5pm on a Thursday and arrived in Queenstown about 7pm, staying at Queenstown Holiday Park & Motels Creeksyde, very close to town centre, Chris in his van and me in my tent.

After dinner we went to check the opening hours of the gondola, as neither of us felt confident about our fitness and we were both keen to save the time and effort of walking through the pine forest. We learnt that the gondola started at 10am, so there went our early set-off intention.

The next morning, after our gondola ride, we got under way from the top station. The sky was blue and there was hardly any wind at that point. Despite the chilly morning, we soon warmed up with the steady climb. I was surprised how many people were on the track. We saw trampers, runners and several groups of mountain bikers.

When we reached the saddle, about two-thirds of the way up, we stopped for a breather, a snack and to absorb magnificent lake and mountain views. The plan was to reassess our timing and stamina to decide whether we would continue to the top or walk down from the saddle.

It was really a no-brainer. The top looked deceptively close, despite another 438m of elevation gain to be scaled. A surprising number of people were walking to the summit.

Trampers have a rest on Ben Lomond Saddle with the peak towering above them. PHOTO: ALINA SUCHANSKI

The track to the top is steeper than the gentle slope leading up to the saddle.

There was no reprieve from the sun. Apart from a brief walk through a conifer forest near the top of the gondola, most of the track was completely exposed to the elements. We would have been grateful for some clouds shading the sun from time to time, but there were none. We soldiered on, enjoying an increasing breeze cooling us off.

Three hours after leaving the gondola, we were at the top. The view certainly made our efforts worthwhile. We could see Lake Wakatipu in its full glory surrounded by spectacular mountains all around. To the east were the Remarkables, looking rather small from this height, Richardson and Harris Mountains were to the north, and Thompson Mountains to the west.

Through the visor on the summit we were able to find Walter Peak and Mt Nicholas to the southwest.

There were about a dozen people at the top and while we were having lunch a kea entertained us with its antics, trying to steal food from everyone.

The stroll down the mountain took only two hours.

This trip did not end up being as scary as it originally sounded, although Chris and I agreed that taking the gondola was a good idea. Walking up and down the gondola track would have added another two hours to our six-hour day trip, making it a bit more strenuous and less enjoyable.

Having made the ascent, I now understand and appreciate the popularity of this track back in the early days when Amber Lloyd strode up Ben Lomond and recorded it in her newspaper article.

Access: Follow the Queenstown Gondola track to the top station or take a ride up, then follow the markers to the summit.
Grade: Moderate
Time: Six hours from the top station to the Ben Lomond summit and back. Eight hours return from the lower gondola station to the top of the mountain.
Distance: 14.5km round trip, 1438m climb
More information: www.doc.govt.nz
Note: Take sunblock, but also a warm layer of clothing, as the temperature at the top can be several degrees cooler that in Queenstown.