PS Murray Princess is a modern interpretation of the paddle steamers of old. PHOTOS: GILLIAN VINE
Gillian Vine takes a gentle cruise on the Murray River.

From  the air, he is a pale jade dragon, undulating through South Australia's sienna landscape. Close up, sunlight turns ripples into silver scales, as the Murray River basks in late-summer heat.

The river is placid as I board the paddle steamer Murray Princess at her home port, Mannum, for a week-long cruise.

The dragon is sleeping now but he can be ferocious, as floods over the past 150 years testify. The biggest was in 1956, when vast areas of South Australia, Victoria and New South Wales were swamped. During the flood, in Mannum's main street, water rose above the height of buildings' ground floors. One enterprising publican operated from the first floor of his Mannum hotel, serving drinks from the balcony to patrons who arrived by boat.

Millions of years old, the Murray’s sandstone cliffs are chock-full of fossils.
Such destruction is impossible to picture now, as is the image of laden paddle steamers carrying wheat and wool down the Murray to Adelaide. These days, it's nearly all pleasure craft, from houseboats to paddle steamers.

A few fragments of the glory days remain - on the riverbank at Mannum is the extraordinary square boiler from the first paddle steamer to trade on the river, the Mary Ann, launched in 1853. Here, too, is the town's museum, which traces the history of the river through artefacts and photographic displays. It also incorporates the paddle steamer Marion, built in 1897. Restored and crewed by volunteers, Marion can be inspected when moored by the museum or visitors can take cruises on the river.

Built in 1897, the restored paddle steamer Marion forms part of Mannum museum’s collection.
My cabin on Murray Princess is luxurious when compared with 19th-century paddle steamers: I bet even the captains didn't have proper bathrooms back then. Each deck is named after a Murray River personality and I'm delighted to be on Cadell because 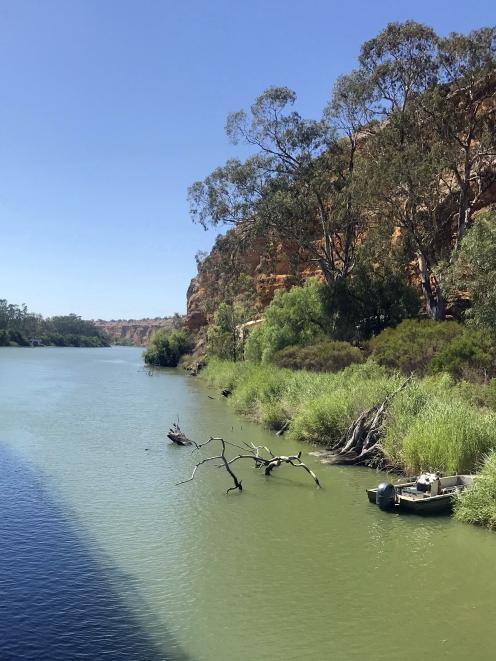 The Murray River looks like pale jade in late summer.
there is a Kiwi connection. Scots-born William Francis Cadell, best known for his exploration of the Murray, spent time in New Zealand during the land wars. He didn't cover himself with glory here, getting into strife over a mutiny on HMS Sandfly

That was minor, though, when compared with his slave trading, including ``blackbirding'' in the Northern Territory, which led to his arrest and later his expulsion from Western Australia. He then became a trader in what is now Indonesia and was murdered by a crew member off the New Guinea coast in 1879. Despite his less salubrious exploits, the Southern Australian town of Cadell is named for him, as is Cadell Strait in the Northern Territory.

Luggage unpacked, I head to the Paddlewheel Cafe on Randell Deck to get a slug of caffeine and watch the huge wheel turning as we glide along. The company provides a coffee mug for each guest, not just as a souvenir but also to reduce the use of disposable cups, a good environmentally friendly gesture.

Murray Princess looks like an old-style paddle steamer but that's an illusion - she was launched in 1986 and at 67m long and 1500 tonnes, is the biggest ever to operate on the Murray.

Not everything on board is modern, though. First Officer Allan Beattie says for navigation the crew use old, hand-drawn maps of the river.

``They're still very reliable,'' he says of the charts.

We are allocated tables for dinner. Breakfast and lunch are ``sit where you like'' but most stay with their dinner companions, so conversations tend to pick up at lunch where they left off at breakfast or as we scramble to join the day's activities.

Ancient rock drawings of suns (days) showed how long a journey would take.
Most days there is something onshore, from a gentle potter along a track to a wetland to a day in the Barossa Valley, which includes sampling wines at a couple of SA's 120-plus cellar doors and a look at historic sites. A close look at a unique family tree tickles my fancy. It's the massive red gum where Friedrich and Caroline Herbig lived from 1855-60 with two of their 16 children, descendants of whom still live in the area.

Near Walker Flat, we moor alongside the historic Aboriginal site of Ngaut Ngaut, whose rock carvings of suns gave travellers useful information on how many days it took to travel from one place to another, while an injunction not to bring weapons was depicted by a boomerang with a line through it.

A believer in the importance of zoos' role in saving endangered animals, I thoroughly enjoy a trip to the open zoo at Monarto. It's ladies' day out when we visit, the lionesses on show while the lions are kept separate, a commonsense way of preventing indiscriminate breeding.

The zoo is actively involved in breeding rare rhinoceroses and other African mammals, as well as North American bisons and Przewalski's horses. Staff work with zoos in other parts of Australia and around the world to keep inbreeding to a minimum and to help return animals to the wild.

Houseboats tied up on a quiet stretch of the river.
Amusingly, the emus here came with the land. When the 1500ha property was fenced, there were emus and a couple of kangaroos, the latter now living in harmony with African antelopes.

Back on board, my table companions teach me a new card game, then convince me to join their quiz team. We're klutzes when it comes to sport but we're good on things like James Bond movies and not bad on general knowledge so at the end of the quiz, our team is second. A Commonwealth Games medal winner wouldn't have had a wider grin.

I decline an invitation to go fishing, which not only provides sport for anglers but also makes a tiny dent in the river's huge carp population. This Asian fish, now widespread throughout the world, is a major pest in the Murray-Darling Basin and other parts of Australia. It is an offence to throw back any carp, live or dead, but the local pelicans appreciate a meal they don't have to catch for themselves.

Carp isn't on the dinner menu but oysters and prawns are part of the lavish buffet that evening, a change from the more formal three-course evening meals we have most other nights while watching the sun set as we roll along the river.

A Murray Princess cruise is a leisurely way to sample South Australia and the delights of river cruising without going too far from home.

Gillian Vine cruised the Murray River as the guest of Captain Cook Cruises.

• PS Murray Princess takes a maximum of 120 passengers in its 60 staterooms and cabins. From its home base at Mannum, it usually cruises between Murray Bridge and Blanchetown. Cruises are for three, four or seven days  all year round. For details and prices, see www.murrayprincess.com.au

• House of Travel has a three-night cruise, starting from $976 per person twin share, on the PS Murray Princess. Valid for April 1-May 31, September 1- December 31 and March 1-31, 2019. Valid for sale until March 15 2019. Meal included, international flights additional. Conditions apply.