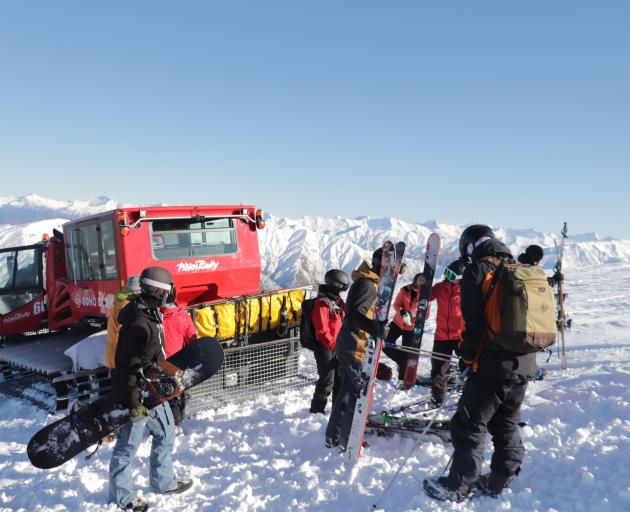 The Soho Basin experience is open to skiers and snowboarders with an intermediate level (or above) ability. PHOTOS: HUGH COLLINS
Located on the southern side of Mt Cardrona, Soho Basin offers guests up to 264 hectares of pristine ski terrain. Hugh Collins goes for a "shred".

As we zig-zag our way up the slightly precarious road to Cardrona Alpine Resort, fond memories come flooding back of several family trips I had skiing here as a teenager. But we will not be riding the groomed trails of Cardrona today. Instead, we take a sharp left before the main car park, passing through a gate to the Soho Basin base building — an eagle’s nest atop the Cardrona Valley. My first high-end skiing experience has begun.

I’ll admit I’m a tad nervous. Don’t get me wrong, I’m not a bad skier. Well, actually, that’s debatable. Put it this way: I can get down the intermediate runs at Coronet Peak and Remarkables without having to call ACC at the bottom (touch wood). But today we will be cat skiing across three bowls, all with no shortage of fresh, unadulterated powder. This will be my first experience of this kind, but to help ease my apprehensions, we’re served breakfast first. Not just a bit of jam and toast either — muesli, yoghurt, creamy scrambled eggs.

"This is probably how the Royal Family lives on a skiing holiday," I think to myself.

After I confirmed my place on the trip, I was told I ideally needed "wide skis" — at least 100mm underfoot.

I didn’t measure mine but I assume they’ll more than likely do the trick — hopefully, my classic Kiwi attitude of "she’ll be right" will prevail.

The snow cat collects skiers at the bottom of each run.
However, when I arrive at the pick-up, my driver makes a quick inspection and tells me they are probably not what I want.

But it’s OK, he says. I’ll be able to borrow a pair up top. However, as I’m eating breakfast, one of the guides informs me my boots won’t fit the Soho skis on offer — despite a short reprieve, I will be using my own skis after all.

After breakfast, we set out for our first runs. Our mode of transport is a Kassbohrer snow cat. My only experience with such a vehicle was on the old penguin ride at SEA LIFE Kelly Tarlton’s Aquarium in Auckland. But this is the real deal and when inquiring about how much one would set you back, I’m told you’d be doing well to spend less than half a million.

We pile in and head up the mountain. You won’t find seatbelts in these machines so if you’re facing downhill you have to perch your feet on the opposing bench, unless you want to go crashing into those sitting opposite you. With 11 or so of us in the cab, the cat’s intimate interior space is certainly conducive to conviviality. Well, you’d hope so anyway; there’s no escaping anyone’s voice in here.

Skiers prepare for a run near the top of Mt Cardrona.
Arriving at our first run, hundreds of metres of pristine and untouched snow lies before me. Not to mention the sprawling views across the Wakatipu Basin. This is skiing in its primordial form — how the pioneers did it, and how the one percent do it today. As we set off I am instantly in awe of the raw sensation of pure powder skiing. It’s not easy, though, and I’m craving a warm-up on the beginner slope at Coronet. This is a different realm of snow sport from what I’m used to but the guides are encouraging and offer a few tips.

I’m feeling that hiring wider skis would probably have been a good idea, but after several runs I start to find a groove (of sorts). Thankfully, my moderate abilities don’t prevent me from enjoying the rush of this form of skiing.

Between runs, Soho Basin snow safety manager Steve Schreiber shares stories of a lifetime of backcountry ski escapades around the world. His yarns almost make me feel like I’m part of some elite, exclusive ski club. Just before lunch we take a cat to the top of Mt Cardrona, 1936m up.

Being a flawless day, we’re treated to 360-degree views of the Queenstown Lakes District.

Come lunchtime, I’m in desperate need of a rest. We’re served a three-course meal which includes an incredible beef casserole-esque dish. This is fresh food, too — a chef has been hard at work all morning in the base building. The views from our lunch table are so good I almost feel as though I could kick back for the afternoon. But no, I am here to ski!

The experience offers stellar views of the Crown Range and beyond.
As we set off for another run, it’s clear my skiing has improved already. Being put in the deep end (or in deeper powder, I should say) has pushed me to the edge of my abilities. But, of course, on our third or fourth run of the afternoon I take a solid bail in a seriously thick patch of powder. It’s getting back into the skis that’s the hard part.

Towards the end of the afternoon, I find myself on a line which is almost certainly above intermediate level.

"Wouldn’t have done that a few hours ago," I tell myself.

After several more runs, I confess I’m ready for a beer or two back at base. And so it shall be — the Soho team puts on a phenomenal "apres-ski" spread. As the sun sets towards the far end of Lake Wakatipu, I can already start to feel a few new aches and pains, but it’s bearable: the kind of pain that was worth it.

Hugh Collins was hosted by the team at Soho Basin.

A three-course lunch is served outside the Soho Basin base building.
AT A GLANCE
Comment now 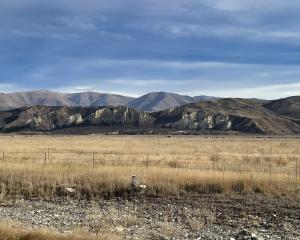