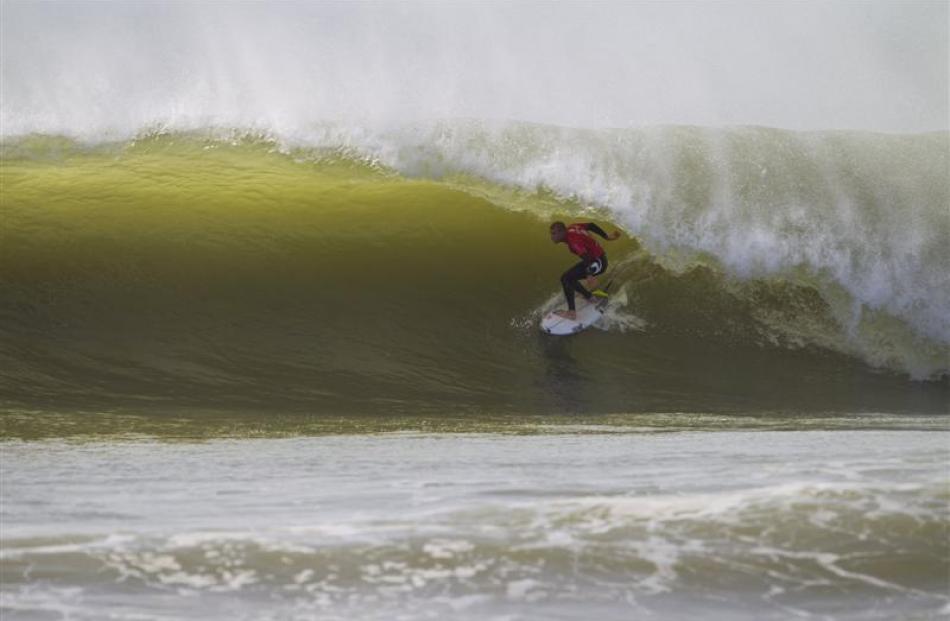 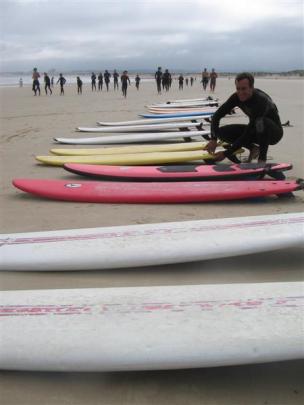 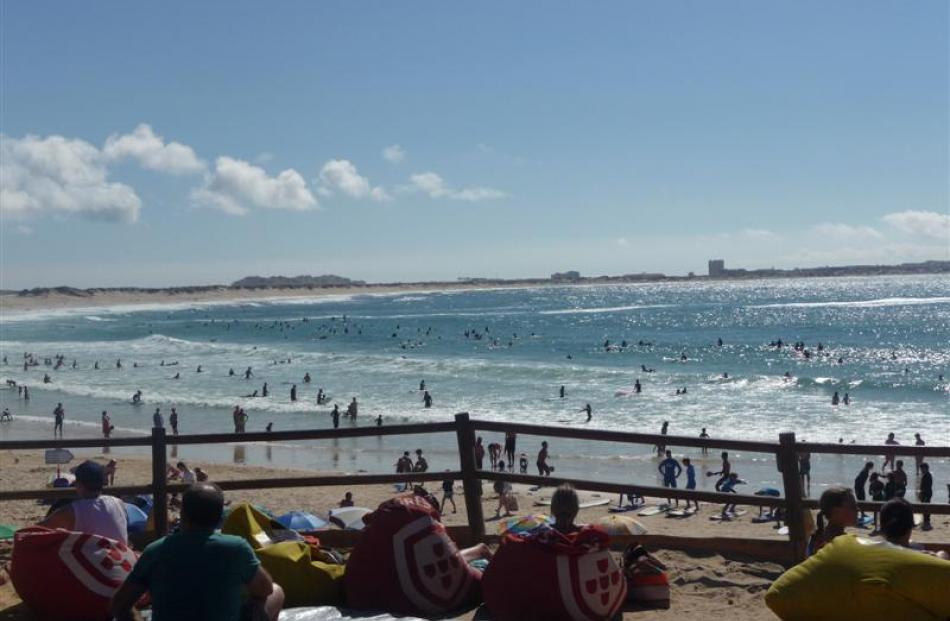 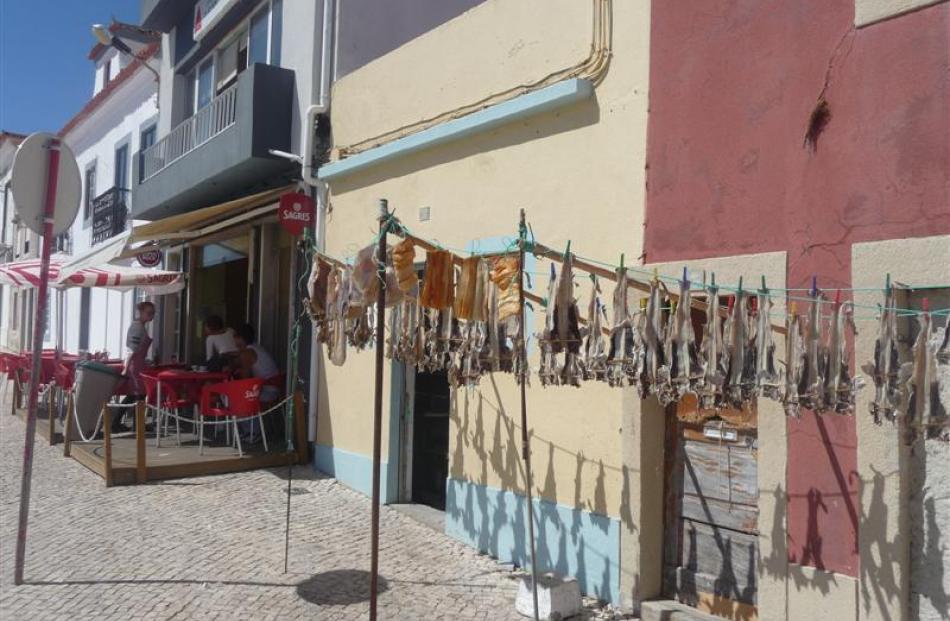 Fish hangs out to dry on a cobblestone street in Peniche. 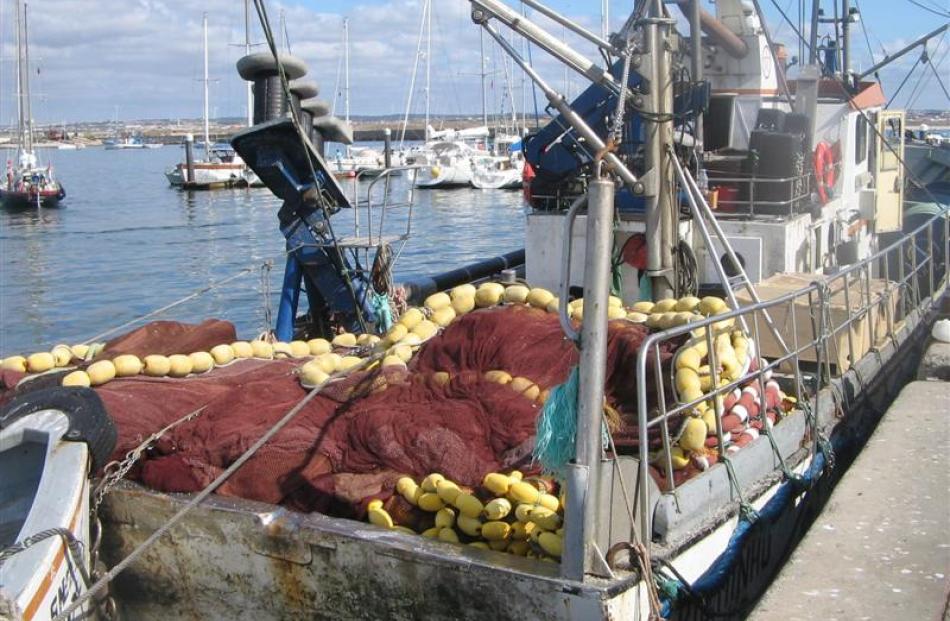 A fishing boat waits at the harbour in Peniche. Photo by Pam Jones.

Sun, surf and sangria make for a perfect Portuguese summer in Peniche, where a humble fishing village has been launched on to the international stage. Pam Jones reports.

The surf's up in Peniche, and surfing instructor Paulo Ramos is arranging his priorities.

The day before, he rode metres-high waves off a rugged beach more favoured by locals than tourists, but today dozens of teenagers are due for lessons at the long, curved Peniche de Cima.

Wetsuits and surfboards are waiting and a large video screen shows surfing legends.

But nothing's going to happen before one crucial thing's ticked off.

Like most Portuguese coffee aficionados, Ramos needs a shot of short, strong espresso to hit the ground running.

Before every surfing session you'll find him knocking one back, gesticulating, as only Latins can, about the sun, the wind, the swell.

Every summer in Peniche, 90km north of Lisbon, those things are reliably favourable and the once quiet fishing town has steadily morphed into a surfing hot spot with an increasing international profile, due in part to a landmark event.

This is the seventh year in a row Peniche's world-famous Supertubos Beach will start the surfing world's international Moche Rip Curl Pro Series, from October 20-31.

Racing is also held in nearby Cascais, but it's Supertubos' 4m to 5m A-frame barrels that feed off deep Atlantic swells that really thrill surfers and spectators.

Because Peniche's peninsula has both north and south-facing coastlines, surfers get great conditions every day, regardless of the swell and wind direction.

The World Surf League's website describes October surfing conditions as raw, wild and unpredictable, but other Peniche beaches such as Peniche de Cima and Baleal provide graduated waves ideal for beginner and intermediate surfers, as well as calmer waters for swimmers.

Enjoying our own coffee and juice beachside, we breathe in the salty Atlantic air and ponder the mix of 21st-century Peniche.

It's true impossibly blond surfers often dominate the waves and there are surf camps everywhere, but families and locals still hold plenty of clout.

Teenagers in bikinis seemingly made out of dental floss mingle with grandmas in one-pieces, while the stronger surfers wait for the perfect ride and groupies work on their tans.

Beach bars try valiantly to keep up with the demand for Sagres beer, strong coffee and ice creams.

Ignoring all of this, a steadfast tide travels inwards and outwards on the strength of the moon.

It's an evolving Peniche with an endearing mix of locals and tourists and I feel like both when I wander its zigzag streets and seaweed shores.

My husband's hometown has featured strongly in our travels and we have sunned ourselves on a variety of white-sand beaches in its environs, all of which have the prestigious blue flag, the highest awarded by the European beach classification system.

This summer, more people than ever seemed to park up at Peniche, a Timaru-sized town that used to be an island before silting formed a narrow piece of land and made it a peninsula.

A castle wall once surrounded the town, and good sections of the wall remain, as well as the large entrance gates on one side.

The word on the street was that terrorist attacks on other shores had made out-of-the-way Portugal seem a safer bet, and more families and backpackers than ever ambled through Peniche's easy-to-walk cobblestone streets, safe and secure.

It is a great new holiday spot for many but for us it's literally going back home and we gravitate always to old favourites, spending hours at many an eatery or watering hole.

You can't beat the beachside bars that sell cold beer, sweet pastries and garlic-coated snails but for dinner, Pedro's, in the town centre's restaurant-filled promenade, has become our absolute favourite.

Truckloads of people create a steady stream of diners feasting on fresh fish grilled with olive oil and rock salt and Peniche's signature dish, caldeirada, a steaming pot of seafood, tomatoes, onions and garlic that is similar to a French bouillabaisse.

Try the sangria too, red, white or sparkling.

I enjoyed an almost daily dose of it while there.

Down at Peniche's harbour, retired fishermen inspect incoming boats from afar, the wisest able to estimate the tonnage of fish on board by how low the boat rides on the waves.

Decades ago the boats came right into the centre of Peniche but now they pull up at a nearby wharf and fish market.

Until just a few years ago old fishermen and their wives would hand-mend huge fishing nets on the town marina, but now that is done elsewhere too.

Old-timers still perch near the marina to dissect the day's events though, and a mix of young and old fills the town's streets.

Multigenerational outings are common, with young children and teenagers and their parents and grandparents all out for a stroll, a meal or a drink together.

On cobblestone corners, some households still string up fish to dry.

It's a way of life sacred to many and honoured in Peniche's annual Festa da Nossa Senhora da Boa Viagem (Our Lady of Good Voyage),

who ensures the safe return of fishermen from their journeys.

The festival parade is a riot of colour but has a serious and sacred purpose.

The Virgin Mary includes fishermen in those over whom she watches, and a procession of fishermen and their families carry flowers, candles and Madonna-adorned floats to honour and thank her.

Those floats are taken on to fishing boats, which sail around Peniche's harbour before returning to the marina.

A (fresh) sardine festival, concerts and church masses are also held during the four-day August festival, which coincides with peak tourist traffic in Peniche.

It's a time for locals and visitors, young and old alike, to examine Peniche and reflect on its past and future.

There is a healthy mix of fishermen, surfers and all those who love the sea, and hopefully the waves will keep bringing in bounty for holidaymakers and residents alike.