Long night ahead for fire crews, alert for Sydney 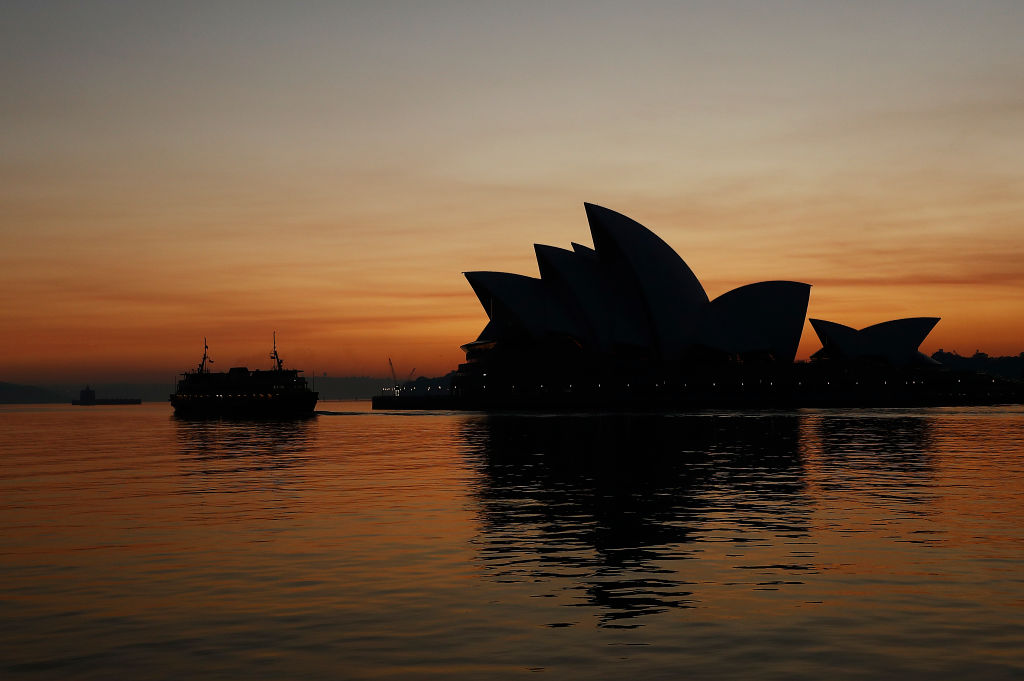 A smoky sunrise behind the Sydney Opera House on Tuesday morning. Photo: Getty
Firefighters have a long night ahead of them, with strong winds expected to reach northern New South Wales fire grounds around midnight.


More than 78 fires are raging across the Australian state, 47 uncontained and more than 10 subject to emergency warnings. The Greater Sydney, Greater Hunter and Illawarra-Shoalhaven regions have been issued catastrophic danger ratings.

The Rural Fire Service (RFS) on Tuesday afternoon issued their first "watch and act" alert for a blaze in Sydney as the city faces a day of catastrophic fire danger, the highest possible rating.

The RFS issued the alert for a fire at Llandilo, just north of Penrith in western Sydney. The fire is in the vicinity of the Wianamatta Nature Reserve.

Winds have picked up across NSW increasing fire activity and the risk to residents, including thousands of people on Sydney's urban fringe.

Transport for NSW encouraged people to leave work early on Tuesday afternoon and to avoid "all non-essential travel on roads and public transport". Many roads outside of Sydney remain closed due to bushfires.

"If you need to travel, be prepared for conditions to change quickly and roads to close suddenly," Transport for NSW said. "Also make sure you've got water, food, supplies and a full tank of fuel. Make sure your mobile phone is fully charged before you set out."

A dust storm has arrived in Sydney ahead of tonight's squally cool change. A 'Poor Air Quality Forecast' alert has been issued by the Department of Planning, Industry and Environment. Areas of smoke haze across Sydney too. https://t.co/rNoFQ8HPaC #NSWduststorm #NSWfires #7NEWS pic.twitter.com/D8LzlEk29Y

Authorities are warning NSW residents not to underestimate the damaging effects of smoke as air quality worsens. The blazes have lowered air quality, with all regions in Sydney now deemed hazardous because of the smoke haze.

The Department of Environment's air pollution index rating has recorded 239 micrograms of particulates per cubic metre in Sydney's East, while the Lower Hunter's figure of 340 was the worst in the state.

NSW Ambulance Commissioner Dominic Morgan said the hazardous air quality had resulted in "slightly above average demand", with 31 calls for respiratory conditions since 5am on Tuesday including 17 in Sydney.

Mr Morgan urged asthmatics and others vulnerable to respiratory issues to remain vigilant, or the consequences could be fatal.

But Australian National University population and climate health expert Liz Hanna insisted everybody should be on notice to smoke's irritating effects.

"Never underestimate how these things can sneak up on you and how damaging they can be, even if you think you're fit and well," Dr Hanna told AAP. 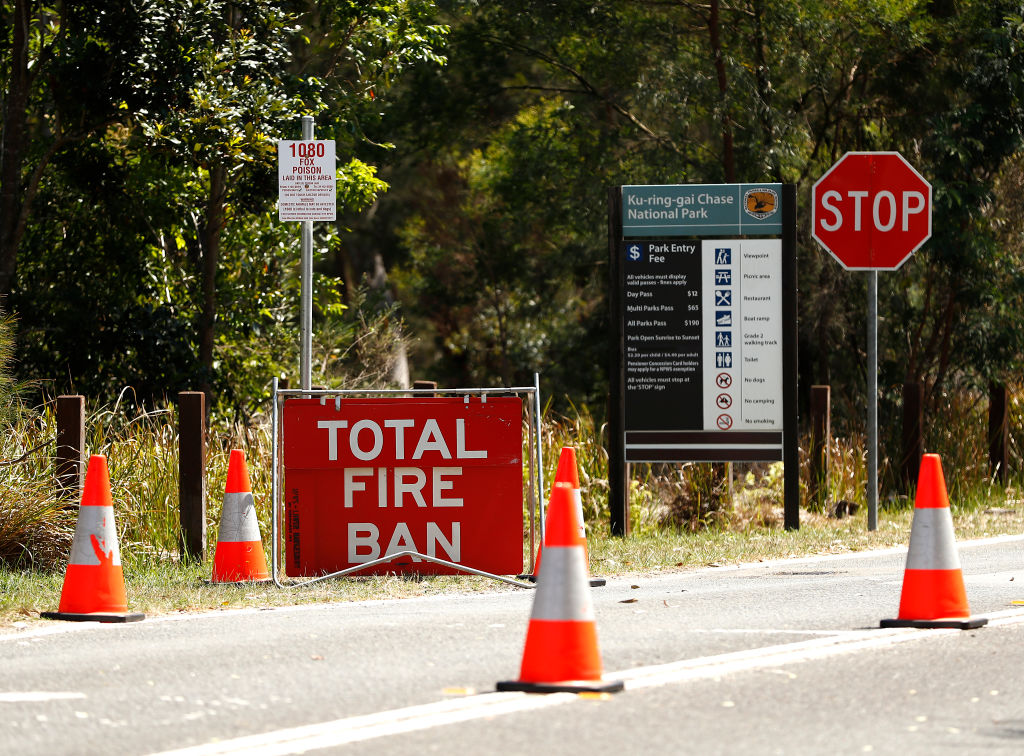 'WORSE BEFORE IT GETS BETTER'

The Bureau of Meteorology warned things will get worse before getting better.

The change will bring vigorous southerly winds which could rapidly expand the length of fire fronts.

"Winds that are currently moving from the northwest are going to change to southerly and track up the coast," she said in Sydney.

"And when that change happens ... the fires will be fanned in a different direction. They'll be very gusty and quite unpredictable at times. So that will make fire conditions much more dangerous."

"Things are going to be pretty difficult for some time tonight before we see any real improvement in fire fighting conditions," she said.

NSW Rural Fire Service commissioner Shane Fitzsimmons said Tuesday was playing out as predicted, with average winds up to 60km/h across the ranges with gusts over 70km/h.

"They will continue to strengthen and build ahead of the passage of that cold front that's moving across the state," he told reporters.

"Later on today, we're expecting the southerly to start influencing and driving like a southerly buster up the coastal strip and more southwesterly-southerly across the ranges and further inland."

"This southerly is going to continue through and those strong winds are not going to get to northern areas of NSW until midnight or early the hours of this morning across some of these fire grounds," he said.

Mr Fitzsimmons urged people to relocate if in the path of a fire.

Fires at Hillville near Taree and Nimbin west of Mullumbimby were developing, the commissioner said. He also made special mention of a blaze in the Wollemi National Park north of Sydney.

"If you are in the area of Mellong, St Albans and Upper MacDonald, and your plan is to leave, leave now to a safer location," the RFS said in a "watch and act" alert.

"Leaving early and well ahead of any fire in your area is the safest option," Mr Fitzsimmons stressed. "Safest options might include going to the local shopping centre, going into town, where you're not in the bushfire-prone area."

With embers known to jump 20 to 30km in front of a catastrophic blaze, firefighters attempted tactical backburning operations on Monday night, but Mr Fitzsimmons said their impact would be "tenuous at best".

Mr Fitzsimmons said there'd be no reprieve for firefighters with no rainfall in the southerly change and warm, dry conditions set to dominate in the days and weeks ahead.

"As we look out a little bit further, we're expecting a cyclical pattern of increasing temperatures as we head into the end of this week and indeed as we head into next week," he said.

New South Wales is dealing with unprecedented fires during what the Emergency Services Minister says could be the most dangerous bushfire week in Australia's history.

More than 3000 firefighters and 80 aircraft will potentially be involved battling the blazes.

"We need to make sure every community member takes the opportunity to assess the situation and act with precaution in every possible manner," she told reporters in Sydney.

A week-long state of emergency has been declared in NSW and the Australian Defence Force is on standby to provide support - including for search and rescue operations.

Some 600 schools have been closed. 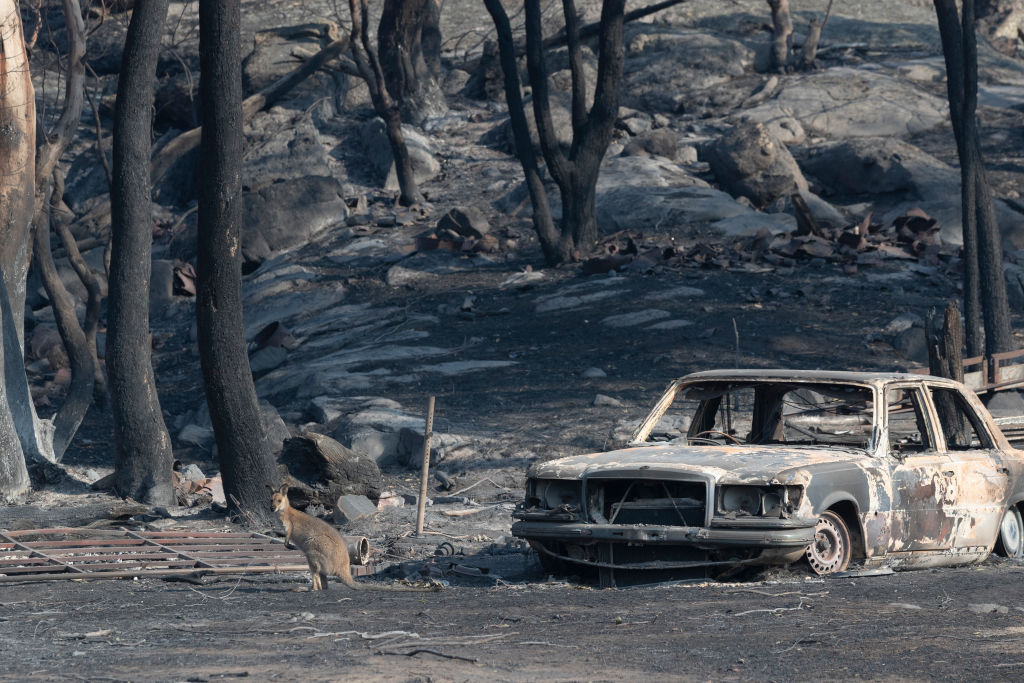 A kangaroo pauses by the burnt-out remains of a car after a bushfire swept through Torrington in Glen Innes, New South Wales. Photo: Getty
Emergency Services Minister David Elliott on Monday said residents were facing what "could be the most dangerous bushfire week this nation has ever seen".

The bushfires, which hit hard on Friday, have claimed three lives and destroyed at least 150 homes in the state's north.

Prime Minister Scott Morrison said he hoped Tuesday would be a "boring day" but said authorities were well-prepared and on high alert.

"Everything that can be done is being done and nature will throw some curveballs today, no doubt, and they will have to respond," he told 2GB.

The Bureau of Meteorology on Tuesday afternoon warned things will get worse before getting better.