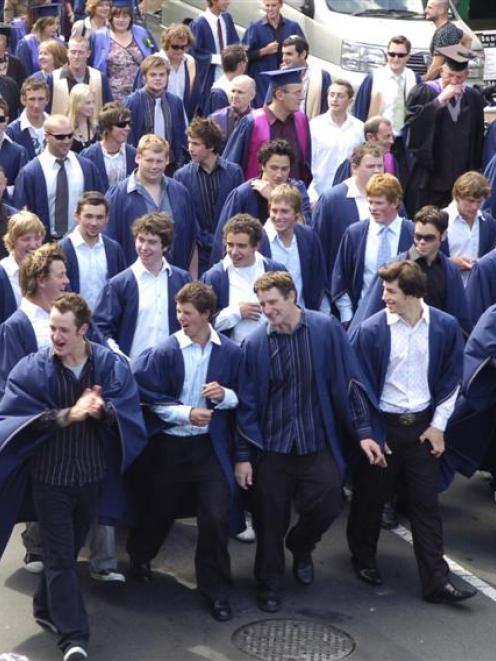 Onlooker Jane Noone (bottom left) photographs Otago Polytechnic certificate in carpentry students (from left) Ryan Keogh (18), Reece Phillips (19), Craig Nelly (19) and Simon Smith (18), as they walk in a procession along George St, Dunedin, with more than 200 fellow graduands. Photo by Jane Dawber.
Otago Polytechnic's decision to weave ‘‘education for sustainability'' into all its courses has won high praise from Green MP Metiria Turei and Dr Morgan Williams, the former Parliamentary Commissioner for the Environment.

During an address at yesterday's polytechnic graduation ceremony, Ms Turei congratulated the polytechnic for ‘‘its plan to become a sustainable organisation and a leader in the field of education for sustainability''.

She also praised as ‘‘exceptional'' the polytechnic's commitment to ensure all students became ‘‘sustainable practitioners'' in their respective fields.

Polytechnics were leading the way in what education for sustainability meant when it was ‘‘built into the structure of a tertiary institution'', she said.

The polytechnic's approach to sustainability education was highly significant and an example to other tertiary institutions on both sides of the Tasman, he said.

Dr Williams, who holds university posts in New Zealand and Australia, has been giving a series of talks on sustainability issues in Otago this week.

Ms Turei told polytechnic graduands, ‘‘We have to start living on this planet as if we plan to stay here.''

She was also critical of the tertiary student loan scheme, terming the burden of loans ‘‘a disgrace''.

‘‘Students should not have to borrow to study, let alone to eat and pay the bills.''

About 250 graduands in a range of subjects, including occupational therapy and construction, graduated at the ceremony at the Dunedin Town Hall.