Greeting for those passing through 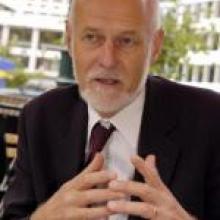 Pete Hodgson
A ‘‘Transit camp'' is how MP describes the University of Otago students in his Dunedin North electorate.

Mr Hodgson said that in the middle of the Dunedin North electorate was the ‘‘transit camp called the university''.

‘‘About 3000 or 4000 constituents just arrived here recently and part of my job is to represent them, and the starting point for that is to be here.''

At the annual Clubs and Societies Day on Wednesday, Mr Hodgson said it tended to be the older students who knew who he was, but that changed during the year.

‘‘One advantage I have is that my electorate office is next to the Captain Cook,'' he said.

Pressing the flesh with hundreds of his new constituents by the Labour stand, Mr Hodgson said students' main concern this year was not with poverty, but with sustainability.

‘‘It is something I always knew and it has been reflected today . . . students are much more interested in sustainability issues.

He said on previous visits to the Clubs and Societies day, students would ask him about their financial situation - ‘‘not to say all those issues have been addressed, but students seem to be more concerned with sustainability''.

‘‘It augurs well for the future that they are interested in a sustainable future.''

While the Tertiary Education Minister would not comment on what would be in the budget for students, he said it would build on previous years.