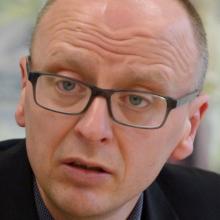 Tony Ballantyne.
University of Otago staff  in the languages and cultures and history departments were yesterday given letters advising how many staff are likely to be cut from the departments during a division shake-up.

It is understood that one full-time position within the French, German, Spanish and Japanese programmes will be axed.

Humanities pro-vice-chancellor Prof Tony Ballantyne said the letters advised of "reductions in the overall number of positions", not job cuts.

A humanities staff member, who did not want to be named, said the room was "glacial" when staff were told of the likely cuts.

"It is just appalling, really.

"They handed us the envelopes and left very quickly.‘‘Clearly, they didn’t want to be there."

The consultation process the university referred to when speaking to media was "cloaked in secrecy".

"I really find it incredible that the people in charge of these decisions continuously mouth ‘transparency’ of process while cloaking everything in secrecy and they’re still urging people to discuss options but when you go and see them they have nothing to say."

Prof Ballantyne advised staff he did not want to discuss the proposed reductions in the media, the staff member said.

Prof Ballantyne said the letter proposed "some changes in staffing".

"There will be three weeks of consultation with affected staff on these proposals, which are still subject to change depending on what information and views staff in these departments feed back to us."

No humanities departments or programmes would be closed.

Meetings with other departments facing redundancies would take place over the next month.

The cuts would not have a significant impact on most students, he said.

"For students at grass-roots level, these proposals mean that a small number of papers may not be available to select from the course selection booklet in 2017."