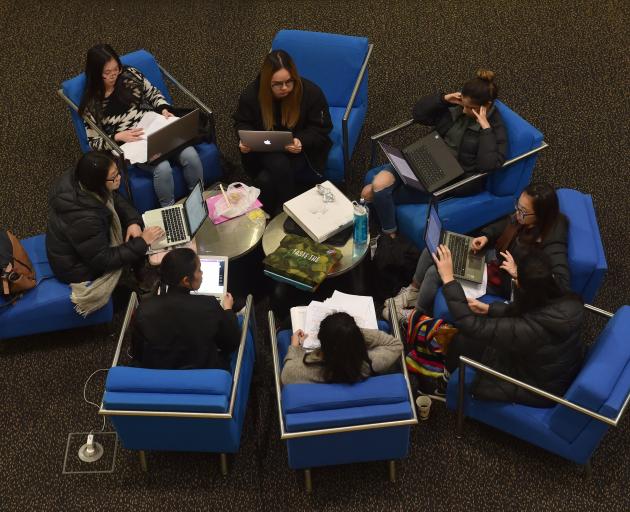 It's shortly before 2am on a Thursday. Students of the University of Otago are still awake, and still on campus. It’s exam time. This means high stress and high tension.

For the first time, the university is keeping the Link and University Union building open until  2am during the exam period. For extreme night-owls the central library is not an option as it closes at 11pm and does not reopen  until 7am. 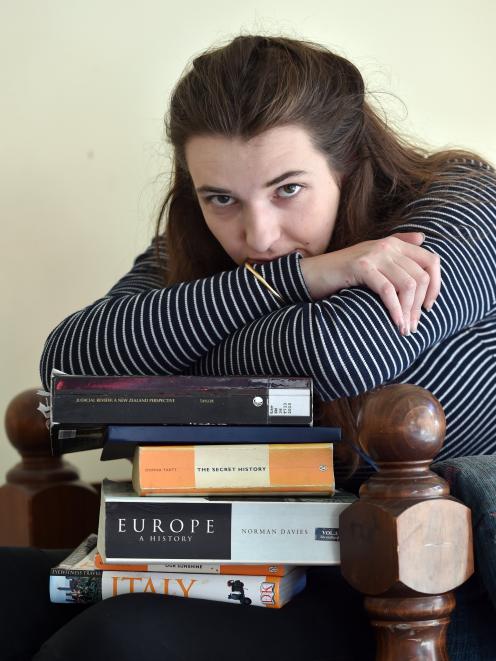 University of Otago student Jenny Coatham (21) stops by her flat to rest, but can’t move too far away from the pile of books.
Second-year students Justin Kim (19) and Tom Jeong (19) are studying for their physiology exam in the Union building. They have been there since 8pm. One might think they’d have an abundance of energy drinks in supply but this duo’s diet consists of mandarins and trail mix. They admit their sleeping schedule is a bit messy during exam time.

"It’s too cold to get up in the morning and here has more heat."

The St David Theatre complex is open to students  24 hours a day during exams. Just after 2am, about 20 students are dispersed around St David.

The atmosphere is quiet except for a faint buzzing of a drink fridge, the odd shuffle of papers, the patter of fingers on keyboards and the occasional whisper between mates.

Fourth-year law and politics student Jenny Coatham (21) sits alone in the complex. She has three exams close together over the next few days. She’s been on campus since 2pm and plans to stay until 6am. That’s 16 hours’ straight study. She will return home for a one-hour nap, then it’s back to the library at 7am.

"We’re going to be studying at an ungodly hour. It’s good that the university recognises that."

To stay alert, she has a bottle of energy drink she’s halfway through and a  chocolate bar. Anything else to keep her awake?

"Just a general love of what I’m studying," she says.

Thomas Bell (18) is a first-year genetics student, sitting by himself in the complex. He has a human body system exam at 9.30am, just seven hours away.

"I’ve done lacklustre study up to the last couple of days. I [always] cram, whether I like it or not. It’s good to have a last resort that’s away from my own bed," he says.

"It’s considerate of [the university] to offer a warm and safe environment for us. The campus guards offer a ride home if you’re living far away. It’s really generous of them," he says.

Justin, Tom, Jenny, Thomas and Alex can give credit to the Otago University Students’ Association (OUSA) for dreaming up the late-night study initiative.

The initiative was considered  a success and up to 60 students were there at peak time, around midnight. President Hugh Baird said the goal was always to get the university to provide late-night access for study as it cost "a hell of a lot" to keep the recreation centre open.

OUSA convinced the university to open the Link and Union building until 2am and the St David complex 24/7. Mr  Baird said late nights were second nature for many students.

"A lot of students are genuine night-owls and are forced to go home to cold flats. The uni has been obliging."

The university’s campus and collegiate life services director, James Lindsay, agreed that the late-night study areas were a good idea.

"Creating the late-night study areas help acknowledge the campus is not just a business-hours environment and we want to help people use the campus more outside those hours," he said.

As for  students like Justin, Tom, Jenny, Thomas and Alex  it’s one day at a time, one night at a time and maybe a couple of energy drinks at once. Maybe even some mandarins.