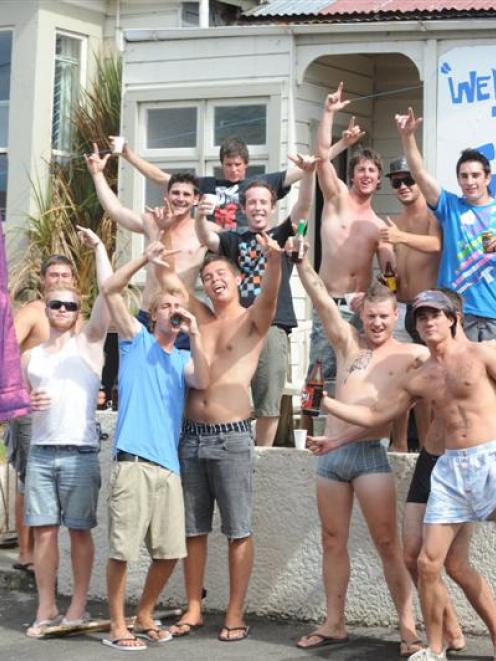 Time to party... Hyde St gets into the spirit of Orientation 2010. Photo by Peter McIntosh
Otago University's Orientation 2010 has started.  The student year has begun, writes Emily Menkes.

After experiencing a blissfully quiet Summer School, where there was never a problem, finding a seat in a library, finding a computer station, this year looks to be the busiest year yet with record-high enrolments.

It might be a while before I find another seat or computer.

After all the New Year resolutions have been broken, many students are making more of their own 'new academic year' resolutions for this year to be their best yet.

Everything during this time is refreshing, everything is new. Orientation marks the time that nearly all students are excited about their new courses, new papers and new flat, before the apathy and dirty dishes set in.

Orientation Week is typically preoccupied with the social aspects of university life, with focus on giving newcomers a head start socially.

Although the focus of this is usually on first-years, many other students use this as an opportunity to see the summer out with a bang.

This can be illustrated with the plethora of invites I have received on Facebook, to flat warmings and parties, some climbing towards 500 confirmed guests.

However, the more official events are set to be both enjoyable and responsible.

Judging from the events list, the OUSA seems to be running a tighter ship, which is especially notable with the absence of the Toga Parade this year.

It was cancelled, but the Toga Party in Union Hall remains, as it can be actively monitored.

It seems a reasonable question, will there be an unofficial Toga Parade this year, or any other form of student rebellion?

Some students seem to think so.

Jess Holmes, a third-year Political Studies student, believes that cancelling the event will not stop it.

"It will still happen, but with less control. It's always going to be hard to control . . . a sudden influx of students wanting to party is a strain on the city in many ways."

In order to cope with this influx, twenty-five extra police have been scheduled to work over the Orientation period, although some students see this as over-the-top.

"Do they really think we'd be that stupid after all the trouble that was caused last year?"  [Over 600 students were disciplined in 2009], remarked one student who requested to remain nameless.

Approached with the right perspective, Orientation 2010 is a fantastic opportunity for breaking the ice (and provided that is the only thing to be broken); that has been well organised to welcome the Otago University students back into the heart of Dunedin.