Plea to prevent, not light, fires 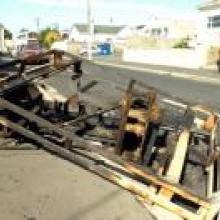 Burn-out . . . The remains of a bed burnt in Hyde St on Monday night. Photo by Peter McIntosh
Not always known for their fire safety, students were encouraged to listen to the Fire Service's Orientation Week message, with firefighters urging them to install smoke alarms rather than burn couches.

Dunedin City senior firefighter Kate Hill said students had been receptive to the Fire Service's message: to make sure working fire alarms were installed, to check electric blankets and to not set items alight outside.

‘‘They have been pretty good, asking for information and listening to what they should do in regards to fire safety.''

Mrs Hill said most students they asked had smoke alarms installed in their flats, ‘‘but they often had only one, and we would like them (smoke alarms) to be in every bedroom''. ‘‘One in a flat is just not enough.'' With smoke alarms retailing from $7, Mrs Hill said they were invaluable and were a great gift from parents as their children embarked on flatting. ‘‘It is the best money you can spend.''

Mrs Hill said many students were saying they had never had their electric blankets checked, ‘‘but it was something they need to do annually''.  ‘‘For students, it is better to be safe than sorry.''

Having moved from Napier last year, Mrs Hill said experiencing the 2007 ‘‘student riots'' was an experience she would not like to see repeated.

‘‘It was just obscene the amount of trucks tied up tending to the students.''

She said no other university in the country had problem's with fires and ‘‘some students think it is their right to light couch fires''. ‘‘But we are telling them it isn't.''

Willowbank Fire Service senior firefighter Scott Lindsay said with the Otago Regional Council able to fine students $300 for setting couches alight and breaking the Clean Air Act, the message was getting through.

‘‘It is just a minority of students who spoil it for everyone else.''

Mr Lindsay said at 9.30pm on Saturday he attended a call-out to a fire which was started at a flat on Dundas Street. Occupants of the neighbouring flat, who were also having a party, did not want the fire lit, and one man tried to put it out, ‘‘but was attacked for being responsible''.

‘‘Students don't want that kind of behaviour, but unfortunately there is still a minority who do.

‘‘But it is encouraging to see people taking a stand and being responsible.''