'Silence of the lab' in aid of malaria prevention 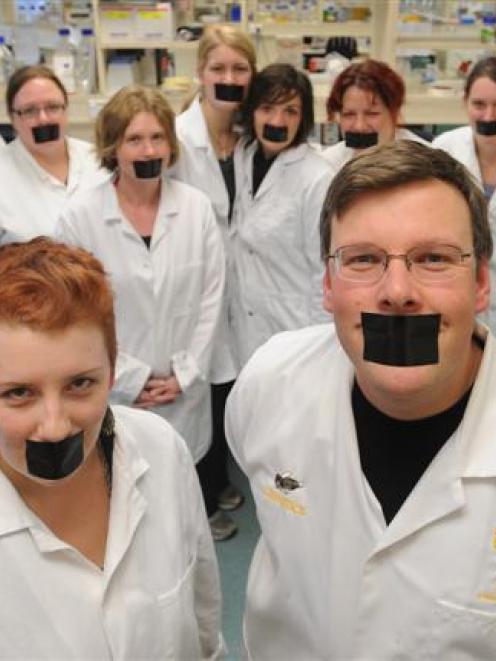 Fundraising for malaria prevention are (front) Tamsin Jones and Associate Prof Peter Dearden, with (back, from left) Nathan Kenny, Dr Otto Hyink, Dr Elizabeth Duncan, Dr Megan Wilson, Sophia Cameron-Christie, Megan Leask, Sarah Morgan, Rosannah McCartney, Gemma Palmer and Meaghan O'Neill. Photo by Peter McIntosh.
The science of silence will be under the microscope today and tomorrow as a team of 13 scientists hold their tongues for a good cause.

Staff at the University of Otago's Evolution and Development Laboratory at the Biochemistry Department have vowed to remain silent for two days to raise money for malaria prevention.

The group will communicate for work purposes using notes during the fundraiser, dubbed "the silence of the lab".

Only Associate Prof Peter Dearden, the laboratory director, can talk, and only then to answer the telephone.

Organiser Tamsin Jones, an assistant research fellow, said the idea was raised as a joke during a shared morning tea with the rest of the biochemistry department.

"Someone joked that the department would pay us heaps of money to shut up," she said.

As the lab was known as the rowdiest in the department, it seemed apt, Ms Jones said.

Anyone who broke the silence would have to do a "mundane" lab job for the next month.

By yesterday afternoon, they had already raised $1100, enough to provide malaria nets for more than 400 children, she said.

Ms Jones said the lab was not carrying out malaria research, but chose to participate in the Unicef fundraiser because the lab's work involved insects.

Spread by mosquitoes, malaria kills a million people every year, most of them children.