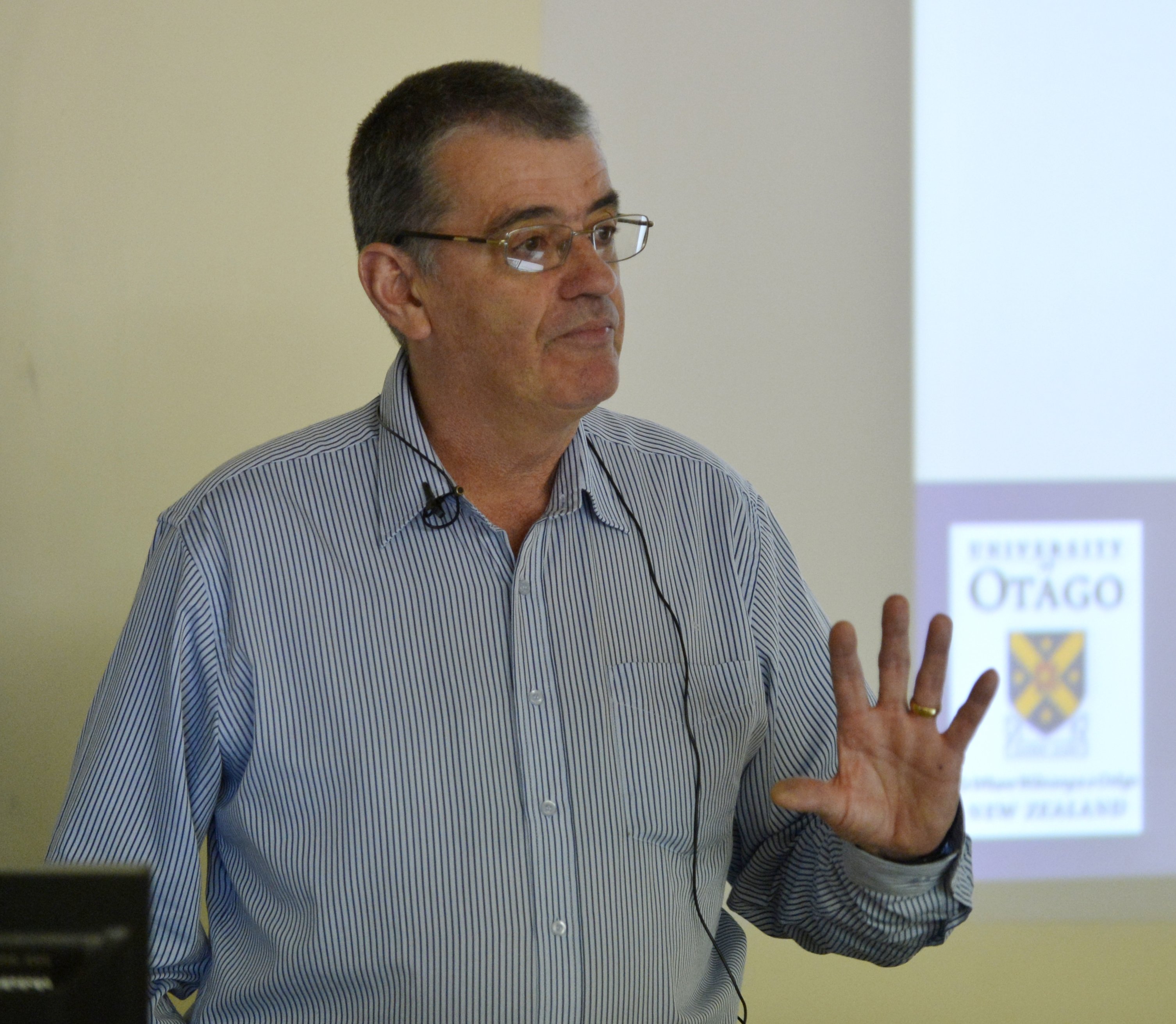 David McBride speaks out about supporting front-line workers dealing with earthquakes and other disasters. Photo: Gerard O'Brien.
Front-line workers responding to the February 2011 Christchurch earthquake who had better personal support networks were just as likely to experience persistent post-traumatic stress disorder  as  others.

University of Otago Associate Prof David McBride made that point during a recent talk about the health of veterans and "front-line workers".

The talk was the latest in a public health series hosted by the Otago preventive and social medicine department.

Prof McBride is based at the department and is the director of a joint Otago research theme called "Health of Veterans, Serving Personnel and their Families". He outlined some of the "counterintuitive" findings of a university questionnaire study of 348 first responders to the February 22, 2011, Christchurch earthquake in which 185 people died.

The study found that many first responders — more than 20% — were still experiencing PTSD a year after the quake, but that people with more personal social support were "slightly more likely" to have the condition than people with less support.

This finding was "something of a surprise", he said during his talk and a later interview.  But this partly reflected  a  need for more specialised and better co-ordinated care to be provided, in a "tailored" way.

Some more specialised help was needed, such as from psychologists, counsellors or psychiatrists, and general social support networks, including friends and work colleagues, could not meet all needs.

Some first responders "weren’t getting the right kind of support".

"They feel anxious, they can’t sleep, they’re worrying about their health, they don’t know why."

And some people were thinking, "I’m a worthless person."

PTSD problems were "different for different groups", and some professional emergency responders, such as police, were well trained to deal with traumatic situations, and their welfare was also "fairly well" supported within their own organisations.

But a host of other people, such as soldiers on cordon duty, social workers, ministers of religion, and teachers, the latter dealing with pupils affected by the quake, had not always received the same level of training to deal with such traumatic situations.

And they did not always have the same level of internal follow-up support from their own respective organisations.

In the aftermath of disasters, people playing essential roles in society, including teachers, ministers of religion and social workers  "have to keep working through".

Veterans and "front-line workers", the latter being "professionally obliged to provide services in times of crisis", were "known to be at risk of post-traumatic stress injury" and "multi-system illness", the latter including a wide range of symptoms, including insomnia, aches and pains and anxiety, including about health matters.

More focus was needed on improving follow-up support for a wide range of "non-traditional first responders", including building demolition workers and teachers.

Some New Zealand veterans were sleeping rough in the Auckland Domain and elsewhere, and more should be done to support them.

"I think we’ve let them down as a society."

And it was "not good enough"  if  many first response workers dealing with  disasters continued to experience PTSD after future disasters without more support being provided.

Returned services personnel are sleeping rough in parks? Only in New Zealand.

I understand PTSD can result from years of vigilant responsibility to others, who may need constant care. PTSD is not about 'hearing choppers'.