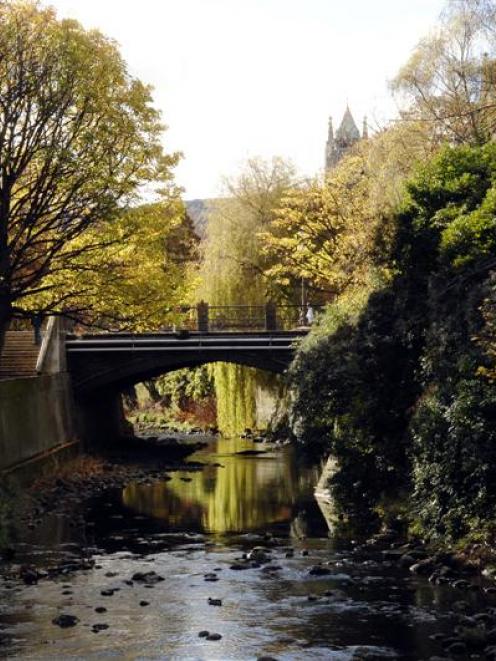 Water of Leith (looking towards clock tower) mentioned in the University of Otago campus master plan for possible development. Photo by Linda Robertson.
However many millions of dollars are spent on reducing the riskof flooding from the Water ofLeith, it will be tragic if we do not grasp the opportunity to improve ourcity at the same time, writes Prof Sir David Skegg.

The future of the Water of Leith is a matter of importance for everyone who lives in Dunedin. The river runs like a thread through North Dunedin, providing the opportunity to have a natural feature with multiple recreational and ecological uses. This opportunity has certainly not yet been taken.

Visitors often comment on the ugliness of the Leith, which looks more and more like an open sewer as it makes its way to the harbour. A greater contrast to the Avon in Christchurch, which is one of the most aesthetically pleasing aspects of that city, is hard to imagine.

For most of the 20th century, attention was focused on the risk of flooding posed by the Leith. The Otago Regional Council (ORC), which has direct responsibility for this matter, has spent several years debating plans to mitigate the risk. Some work has already been undertaken.

In the past week, news reports have made public what has been known for a long time: that the original estimates of costs provided to the ORC by consultants were quite unrealistic. Articles in the Otago Daily Times and Friday's editorial have created an impression that the university's campus planning is somehow partly responsible for both the dramatic cost rise and delays in implementation. Nothing could be further from the truth.

While the university would not be a major beneficiary of proposed flood mitigation measures, we have collaborated with the ORC to ensure its plans for the Leith are effective and affordable, without compromising aesthetic and amenity values.

We were concerned about the initial plan for the part of the river between Dundas St and Union St, in front of the Clocktower Building, because this would have spoilt one of the most attractive vistas in Dunedin.

Our architects collaborated with the ORC to develop a modified plan: the university signed an agreement in May 2007 to contribute to the cost, and we supported the ORC application for resource consent through to the Environment Court.

It was expected that work in this section of the river would start a long time ago, but in early 2008 the new cost issues became apparent and the ORC indicated it was going back to the drawing board and could offer no firm date for work in the university area.

Subsequently, the university engaged in a major campus planning exercise which culminated in the publication of a report in May 2010. This plan provides a vision for the development of our three campuses (in Dunedin, Christchurch, and Wellington) over the next 20 or 25 years. The report is deliberately entitled, "Options for Future Campus Development", because no-one envisaged the plan could be adopted holus-bolus.

In a preface to the report, I pointed out it would not be feasible for the present University Council to "sign up" to an entire plan which would involve the expenditure of well over a billion dollars over 20 years or longer.

Funds available to the university for capital developments are severely limited; we are still implementing critical space projects that were identified several years ago; and when that work is finished we will have to face other challenges, such as the urgent need for refurbishment and expansion of the dental school. The campus master plan provides a reference document which should inform all future building projects, but no-one should expect our present council to decide what might or might not be possible in future years.

There are a few fundamental issues, however, which need resolution as soon as possible, and which ultimately require decisions by bodies outside the university. One of these relates to the future of the one-way streets, with their S-bends, which trisect North Dunedin. Another is the planning for the Leith corridor.

The international consultants commissioned by the university were excited by the potential for the Leith to deliver wider amenity values to both the campus and the city of Dunedin. In their view, plans for the Leith should not be concerned solely with flood protection. They argued Dunedin had a "once in a lifetime" opportunity to put the need for hydraulic mitigation in the context of a wider vision.

The campus plan makes no specific recommendations to change the proposals for work on the Leith between Dundas and Union streets, which we agreed with the ORC in May 2007. Hence I am at a loss to understand why it is now being suggested the university is somehow delaying the project. What the plan does recommend is demolition of our ITS building which spans the Leith in the section of the river south of Union St.

This is something the ORC would have liked the university to do all along, but we did not consider it affordable. Obviously a new building would have to be built for the people who work there. If we did decide to follow the advice of the consultants, this would actually yield opportunities to simplify the flood mitigation in that part of the river, with potential cost savings for the ORC.

Before making such a decision, the University Council would need to know exactly how the ORC intended to modify its plans.

The people responsible for the campus plan consulted with the ORC before developing their proposals. Moreover, in the months since completion of the plan, staff from our property services division have met regularly with ORC staff.

Hence the suggestion in the ODT editorial that liaison and communication between the university and the ORC may have either broken down or reached an impasse is without foundation. Neither was it fair to suggest the university has either changed its mind or wants priority given to its campus development plan.

My colleagues and I at the university are keen to co-operate with all parties and to support any changes that are appropriate and affordable.

Whatever is good for the environment of North Dunedin will be good for our students and staff.

But why is it implied that this project is solely the responsibility of the ORC and the university? Surely the Dunedin City Council should have a voice in decisions that will affect the future townscape of Dunedin? Does the ODT have an opinion? Our consultants recommended several enhancements, such as development of a riverside walk from Dunedin Botanic Garden to the sea.

Much of the input to their recommendations came from Tim Heath, a local architect and landscape consultant. Has the public had an opportunity to hear about his vision?However many millions of dollars are spent on reducing the risk of flooding from the Leith, it will be tragic if we do not grasp the opportunity to improve our city at the same time.

The campus plan offers an opportunity to reduce the cost of what would still be a very expensive project.

Rather than leaving decision-making to one or two bodies, I hope we can have a wide public discussion about options for making the Leith a real asset for the city.

• David Skegg is the Vice-chancellor of the University of Otago.