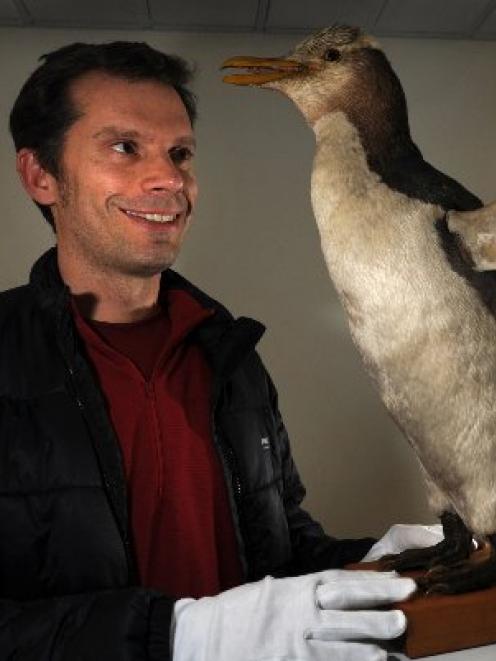 Prof Jon Waters takes a close look at a stuffed yellow-eyed penguin at the Otago Museum. Photo: Peter McIntosh
It has been third time lucky for University of Otago zoologist Prof Jonathan Waters as he starts investigating whether some of our native coastal species, including the yellow-eyed penguin, really are native.

Prof Waters said it was "great" that an $878,000 grant which he had recently received from the Marsden Fund would enable him to investigate how animals responded to human impacts, and how many of New Zealand's coastal species were actually new arrivals from overseas.

Yellow-eyed penguins, for instance, apparently arrived in New Zealand only in the past 500 years, replacing a prehistoric penguin species, the waitaha, that was wiped out shortly after human settlement, he said.

It is suggested that some yellow-eyed penguins made their way north from their native Auckland Islands and Campbell Island and later established themselves on the Otago Peninsula and elsewhere on the Otago coast after the waitaha penguin became extinct.

Many people would be surprised the yellow-eyed penguin may not have been living in Otago as long as previously believed, he said.

"We tend to think that things that are here now are things that have been here for a long time," Prof Waters said.

The kind of extinction-recolonisation events apparently involved with such penguins may be the rule rather than the exception in coastal New Zealand, including with sea-lions and little blue penguins, he said.

It was "great" to be able to pursue the research, after two earlier recent attempts to gain Marsden funding for the project had been unsuccessful.

The little blue penguins which had now established themselves on the Otago coast, after earlier being largely wiped out by humans, were in fact penguins from Australia.

They were different from endemic little blue penguins found elsewhere on the New Zealand mainland.

New Zealand sea lions found on the Otago coast were also not the same creatures that once previously existed there, but were apparently a replacement population from the subantarctic islands, researchers said.

Collaborators in the project are Prof Lisa Matisoo-Smith, of the Otago anatomy department, and Dr Paul Scofield, of the Canterbury Museum.

The researchers will use carbon dating and state-of-the-art DNA analysis of prehistoric bones to shed further light on the country's "dramatic biological history", and to conduct a biological audit of prehistoric New Zealand.

Archaeologists would be teaming up with geneticists, in order to "reveal exciting aspects of New Zealand's past - stories that were previously impossible to tell," he said.