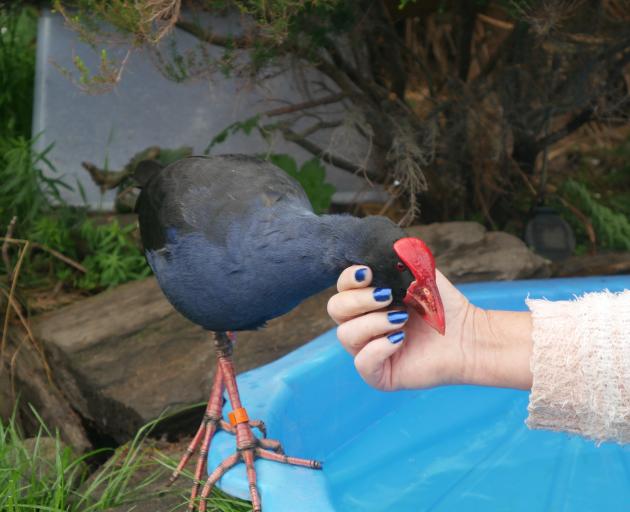 Pookie the pukeko, getting a scratch from Bird Rescue Dunedin founder Sue Cook, was recently found in Mosgiel after going missing in December. PHOTO: JESSICA WILSON
A beloved pukeko that went missing from St Kilda three months ago has been found in Mosgiel.

He had been acting out of character two weeks before he disappeared and did not want to sleep outside.

‘‘He would scream to come inside like something had been bothering him,’’ Ms Cook said.

‘‘In the morning he was gone. He just vanished.’’

Initially, Ms Cook thought he had just gone to visit the neighbours, as he often did, but then thought he may have been run over as there were no sightings of him.

‘‘We just believed he was gone. The whole community just loves him.’’

Then, late last month, friends alerted Ms Cook to a social media post about a pukeko that had turned up at a house in Mosgiel.

Ms Cook was sceptical but sent a volunteer to have a look.

Pookie was in good condition but did not have his blue, spiral leg band on.

Ms Cook believed someone had taken Pookie, locked him up and removed his leg band.

‘‘It would not have fallen off. Someone had to actually undo it.’’

He had either escaped or was ‘‘dumped’’ and would not have survived in the wild alone, she said.

He was now back at Bird Rescue Dunedin, with a new, permanent metal band thanks to the Wildlife Hospital.

She knew it was Pookie because he approached her straight away, slept in same spots as before he left and interacted well with the other animals, including the chicken he grew up with.

‘‘He knows the place and all the animals. He’s a pretty special bird. There’s no other pukeko like Pookie.’’

This was a good read on a Sunday afternoon. Really pleased Pookie is home safely with all his family! Ms Cook and her staff are to be applauded for offering such an essential sanctuary for our wildlife, good on you.