By Molly Houseman
0 Comments
More than $20,000, plus bikes, clothing and a car have been offered to a Dunedin family who lost everything they owned in a house fire at the weekend.

A Givealittle page set up for the family had raised more than $22,000 by 5pm yesterday and people were offering to write cheques for them.

Alice Hudson said she, her partner and three young children were overwhelmed by the support that had flooded in since a blaze tore through their rental home, in Portobello, on Saturday evening.

It claimed their belongings, including their family car. One of their two grey cats remains missing.

"The community out here has been absolutely incredible," she said.

"It is pretty overwhelming."

Portobello locals had been co-ordinating drop-off points for donations, including at Coronation Hall yesterday, so she was not yet aware of exactly what had been donated.

Ms Hudson thanked the community for their help, kind words, donations and messages, as well as firefighters who were "absolutely incredible".

He had received calls from people offering to write cheques for the family and a family from Waikouaiti had offered bikes.

One man had even offered a car. 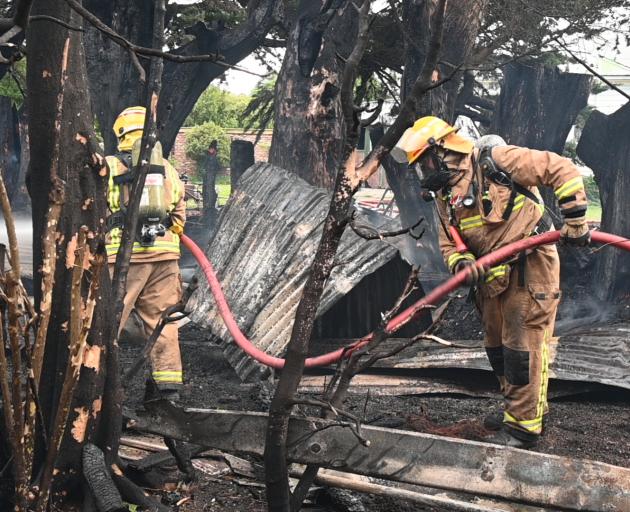 Firefighters at the scene of Saturday's fire in Portobello. Photo: Craig Baxter

The community’s generosity had allowed the family, who were still coming to terms with their loss, to have some quiet time, he said.

"There is a lot of stress and trauma involved."

Following the fire, in Beaconsfield Rd, temporary accommodation was arranged for the family in Harington Point while the community helped them to look for a permanent home on the peninsula.

A friend of Mr Pope’s had also set up a "meal train" to ensure the family did not have to cook meals or school lunches for the next few weeks.

They were provided dinner at the Portobello Hotel on Sunday night.

"It just goes to show the generosity, not only of the peninsula people, but also people in the city.

"Just walking around, I have probably been given about $200 in cash," Mr Pope said.

That money would be used to buy vouchers for The Warehouse or Farmers so the family could buy themselves their own underwear, socks, toiletries and other immediate needs.

The next step, once a permanent home was secured, would be to arrange donations for household items, he said.

Fire and Emergency New Zealand fire risk management officer Marty Jillings spent yesterday at the scene gathering evidence to help determine the cause of the fire.

There were a couple of possible ignition sources to investigate which he would eliminate one by one, as research was carried out, he said.

Mr Jillings had previously said ember transfer from a fire pit was one of the potential ignition sources being investigated.

Ms Hudson said she had seen embers from where people at a neighbouring property had made a barbecue fire pit the night before hit a macrocarpa hedge not long before the fire ignited.

Then she screamed for her children to get out of the house.

A cause was expected to be known later in the week.