By Wyatt Ryder
0 Comments
Rewards for missing pets are reaching into four figures, but owners say no price is too high to get their fur babies back.

A behavioural specialist said the trend was becoming more normal as pets became more like members of the family than in the past.

Dunedin woman Catherine Wright has been going all out to find her crossbreed cat Mollie, who went missing six weeks ago after a move.

Offering a $1000 reward for the cat’s return, Ms Wright has posted widely on social media, put flyers around her neighbourhood and pasted posters up around the city.

She said the main reason for the large reward was to catch people’s attention.

The original plan was to offer $400 to $500, but she decided she needed to offer an amount that would stick in people’s minds. 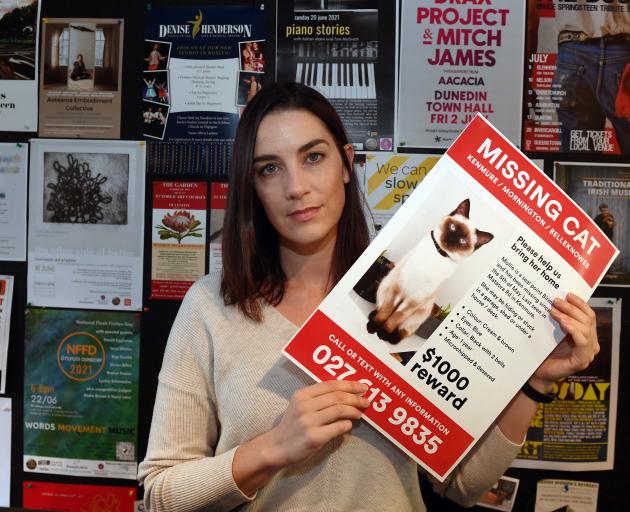 Holding one of the many posters she had made to help find her missing cat is Dunedin woman Catherine Wright. PHOTO: STEPHEN JAQUIERY
Green Island student Alana Langley said that her cat, Miles, was "definitely not replaceable".

Miles went missing about two weeks ago and Ms Langley was offering a $1000 reward for information that successfully led to his return.

She was set to sit her final exams at the University of Otago, but was spending her time looking for Miles instead.

"I’ll do the whole semester again if that’s what it takes to get my cat back."

The search had cost her "a lot of money", but she planned to keep searching.

She preferred to catch Miles, who did not like strangers, herself and had been a little concerned offering a big reward would encourage people to try catching him themselves instead of passing information on to her, but the thought someone might call outweighed those concerns, and $1000 was enough that they could buy their own cat afterwards.

A Brighton family that recently lost two dogs also offered a $1000 reward for the dogs, which were found without the reward money needing to be paid out.

Prof Neil Carr, of the University of Otago, who has studied the relationship between humans and animals, said the emerging trend of large monetary rewards for missing pets was a reflection of the emotional value owners placed on their pets in these times.

Pets were now seen more like members of the family than in the past, he said.

"We see more and more people taking their pets on holiday with them. We see them wanting to be able to go into restaurants, cafes and pubs with them."

Offering rewards for lost or stolen things was not new, but now that mindset was being extended to pets, he said.

"There’s no monetary value you can put on a living being that is central to your life."

It was hard to tell whether large rewards helped get pets home, he said, but the practice was not going anywhere. It was becoming more normal to attach high emotional value to pets, he said.