The three-storey $31.7million development at the polytechnic’s Forth St campus, Dunedin, has secured backing from the Government.

Yesterday’s announcement that the Government will provide a $10million grant and an $18million loan means the planned training centre has cleared its largest hurdle and is almost certain to proceed.

Construction could start before the end of the year and the facility is expected to be ready before the 2023 academic year.

It will provide up to 200 jobs in Dunedin during construction, as well as providing a better facility for more people to learn the skills they need to get into the industry.

An artist’s impression of Otago Polytechnic’s planned trades training centre to be built at the Forth St campus in Dunedin. IMAGE: SUPPLIED

"This announcement just made building the hospital a whole lot easier for us.

"The timing couldn’t be better."

The Government’s backing of the centre is part of its drive to boost the economic recovery after the Covid-19 crisis.

Capacity in the trades workforce would be needed across the country, he said.

The polytechnic’s plan had been on hold when it was submitted to the Infrastructure Industry Reference Group as a "shovel-ready project".

Polytechnic chief executive Megan Gibbons said the project had not been advancing because it looked too difficult to fund.

"It’s fantastic to say ‘now we can’," Dr Gibbons said. 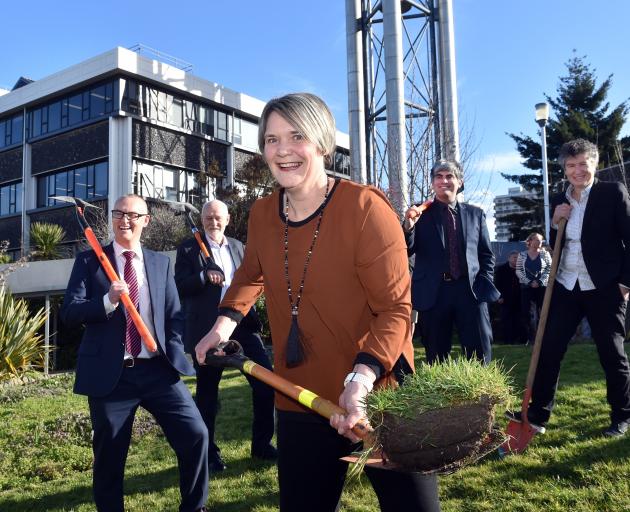 She said the complex would be "an outstanding learning environment, offering modern learning facilities, including common learning spaces".

The University of Otago is yet to receive word about whether any of its five shovel-ready projects will be favoured.

That does not mean they have been discounted, however.

University chief operating officer Stephen Willis sounded a warning about what is at stake.

"If we are unsuccessful in our bid for shovel-ready projects, there will be a significant impact on the university’s capital programme that will cause a ripple effect for decades," he said.

"Our plan was to complete a range of projects prior to the Dunedin Hospital project commencing, to avoid peak resource demands.

"Without shovel-ready success, this will not be possible."

Education Minister Chris Hipkins said backing the polytechnic project was another move by the Government to boost trades and vocational education.

The polytechnic’s building and construction trades programmes have been delivered from leased buildings off site.

The new facility is expected to provide for growth in student numbers in building, construction and trades, as well as increasing industry demand for programmes such as plumbing, drainlaying and gasfitting.

Great idea, shame it is 5 years too late for the hospital rebuild. A new student with the polytech skills/diploma is a glorified apprentice. We have to realise apprentices are required out of school as well. That unfortunately has been left to government because of minimum pay rates. More debt for everybody- yeh.