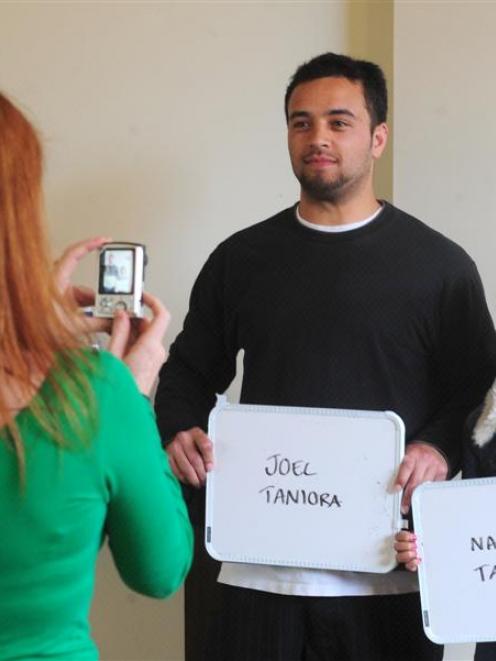 That was the unusual greeting for almost 300 Dunedin residents attending the official casting call for extras in the major motion picture Kingdom Come on Saturday.

While the foot-tracing took some by surprise, most realised the movie about the life of Jesus Christ would require cast to wear sandals and the tracing was a shoe measurement.

The call was for women and bearded men, aged 8 to 80, who could pass as Middle Eastern, Moroccan, Northern African or Mediterranean, and extras casting co-ordinator Victoria Beynon was delighted with the large turnout at the Queens Room of Motel 97 in Moray Pl.

"I expected less than that because Dunedin is so far away from the shooting locations in Tekapo, Twizel and Duntroon."

Ms Beynon said there was an air of excitement in the casting room with many applicants asking what it would be like to appear in the major Hollywood movie.

"It's an amazing experience to be a part of a film but some may not realise how gruelling it's going to be.

"People will be working 10 hours plus, every day. The days are long and we often start at 4am."

Sadly, there was a distinct lack of men with beards at the casting call and Ms Beynon hoped those selected would "get growing" during the next two months.

One of the few to turn up with a beard was Joel Taniora, of Dunedin - and initially he had no intention of applying for a role.

"My daughter [Naomi Taniora (10)] really wanted to be in a Hollywood movie - I just tagged along for moral support."

Despite shaving most of his beard off in a bid to look "presentable", he auditioned anyway - just because he was there.

Ms Beynon was delighted with the quality of applicants and was "fairly confident" quite a few of them would be called as extras for the film, to be shot in March and April. About 400 extras would be needed and successful cast extras would be notified early next month, she said.