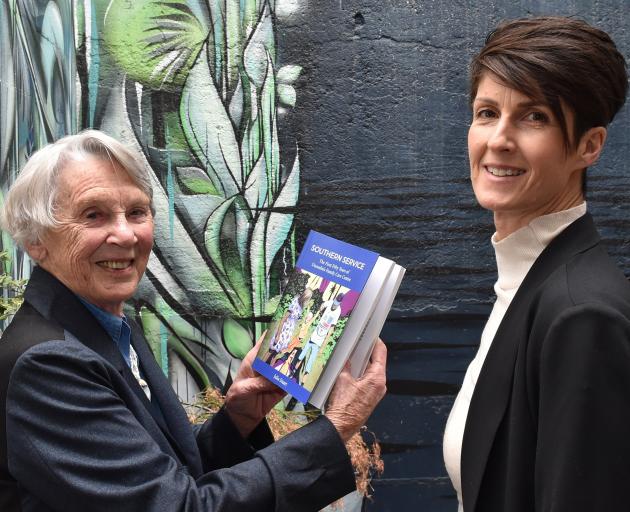 Julia Stuart shows her book Southern Service, which documents the history of Anglican Family Care, to the organisation’s board chairwoman, Ruth Zeinert. PHOTO: GREGOR RICHARDSON
Fifty years of "creative, responsive, and innovative" work has been celebrated by Anglican Family Care.

At the Dunedin Public Library last night, the organisation marked its half-century milestone with the book launch of Southern Service, which documents its history providing free social work support to Otago children and their families.

The book is the result of nearly a decade of research by a dedicated committee and author Julia Stuart.

Mrs Stuart, who was also the first co-ordinator of the national Anglican Care Network in the early 1990s, said the organisation first opened its doors for an "experimental year" on April 27, 1970.

It was started by founding directors Bob Walton and the Rev Bruce Gordon.

It quickly became clear there was a need to focus on children and families in the community.

"There was no social worker training in Dunedin, and so, Bob set that up."

"They gained a reputation for being the place where people who had ideas went to, to get support and oversight.

"They had a social worker in schools about two years before the Government thought it was a good idea."

After having the project as a part of her life for nearly 10 years, Mrs Stuart said it was a strange feeling to hand over the completed book.

"I must admit I am looking forward to it, I have got a bag of bits of paper and photographs I am going to hand over with great delight.

"The initial steering committee who had the foresight and readiness to respond to the need, the Anglican and Methodist Church communities, the many wonderfully passionate and skilled people who have been a part of our staffing and governance groups and of course a community of willing supporters, funders, and donors — too innumerable to mention," he said.

"All of which further impresses upon me the great responsibility we each carry in the ongoing pursuit of our vision. Strong, connected and thriving whanau and tamariki.”