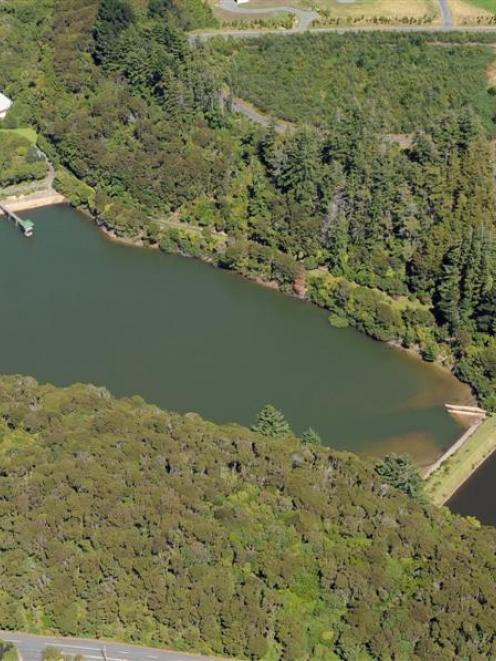 Ross Creek reservoir and dam. Photo by Stephen Jaquiery.
The 144-year-old Ross Creek Reservoir is likely to be restored to full working order and its cracked earth dam fixed as part of a multimillion-dollar plan to protect Dunedin's water supply in case of natural disasters.

The proposal would mean $8.1 million of improvements by the Dunedin City Council - most of it over the next two years - to ensure the city's water network had "infinite" back-up supplies in the event of a natural disaster.

The two pipes supplied about 60% of Dunedin's drinking water each day, but ran parallel for most of that distance through "quite hairy" rough country, before crossing the Taieri River on a single bridge, he said.

That meant Dunedin's water security risk was considered extreme and any damage that disrupted the supply line would leave the city with just 20 days' reserve of treated drinking water.

It also meant water restrictions would have to be implemented immediately if disaster struck, while repairs were carried out, he said.

The council had planned to tunnel under the river to provide a second crossing for the pipes, and replace the two existing pipes with one larger one, during the next 10 years.

However, that plan was reconsidered after detailed design and geotechnical work last year saw the estimated cost of the tunnel more than double to $12.67 million, Mr Osborn said.

The revised proposal would instead see the tunnel plan scrapped and the Deep Creek and Deep Stream pipe renewal deferred, possibly until 2036.

Instead, Ross Creek Reservoir would be restored to full working order by 2013, while other parts of the city's network were linked to provide greater "flexibility" in a disaster.

Mr Osborn said the work had begun before the Christchurch earthquakes, but those events "really made us stop and think" about building flexibility into Dunedin's water network.

"It is in a vulnerable state... it's good that we're doing something about it now."

The plan also meant Ross Creek Reservoir - one of the city's oldest water and amenity assets - was restored, he said.

The moves came after large cracks found in the earth dam last year prompted the reservoir's water level to be lowered to about half-full, and the structure monitored for further damage.

The council had considered alternative plans for the structure, including repairing it, completely filling it in and turning it into a playing field, or part-filling it in with water on top as a "duck pond", he said.

Each option would cost the council about $2 million, but one had to be selected to fix the dam long-term, making its restoration as a water asset the most attractive option, he said.

The work would require the reservoir to be temporarily drained and de-silted and the dam reinforced.

In addition, two pumping stations and a new pipeline linking to the Mt Grand treatment plant would be installed, costing $3.4 million.

That would allow the reservoir's untreated water to be pumped to Mt Grand, treated and then distributed to the city, along with water held at Sullivans Dam, which was already connected to the Ross Creek Reservoir.

The work was expected to be completed in 2013, with a $1.3 million replacement of the Sullivans Dam pipe to the Ross Creek Reservoir following in a decade or two, he said.

The first stage of improvements would be a new $1.2 million pumping station added at the city's southern treatment plant next year, allowing water to be pumped between it and the Mt Grand plant, he said.

Existing arrangements meant the southern plant could only supply lower-level parts of the city, and Mt Grand higher levels.

The changes would increase the city's available water reserve from 20 days to 47 days, adding to the network's flexibility, he said.

The spending would be funded from within existing council water renewals budgets approved for the next 10 years, but represented an $11.2 million saving on original plans, he said.

The revised plans allowed the council to defer the planned replacement pipe for Deep Creek and Deep Stream, possibly until 2036 depending on how it aged, and cancel the tunnel that was to run under the Taieri River.

The changes would give the city a "big merry-go-round", allowing some parts of the water network to be deactivated - by disaster or for maintenance - while relying on other parts of the network.

"It's pretty significant in terms of our confidence in being able to keep water flowing, hopefully no matter what," he said.