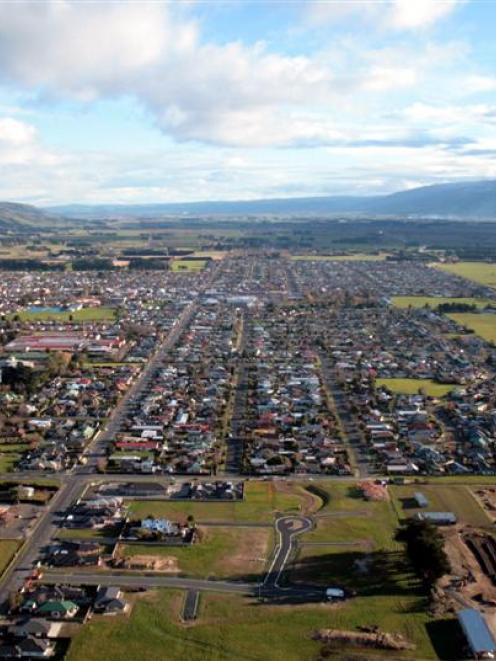 Aerial photograph of Mosgiel. Photo by ODT.
A Wanaka-based developer has applied for consent to create an 82-lot subdivision on one of the largest pieces of undeveloped residential-zoned land left in Dunedin.

The latest large subdivision for Mosgiel - the fastest-growing area in Dunedin - would be on 7.5ha between Gladstone Rd North and Hagart Alexander Dr.

Consultant surveyor Kurt Bowen, speaking for his client developer - former Dunedin accountant Murray Frost, of Minaret Resources Ltd - said the land was zoned residential 1 a long time ago and was not one of the pockets of land around Mosgiel's edge rezoned in 2007 for residential development.

It had not been developed to date because it was effectively ''landlocked'' by a railway line, a creek, Brooklands retirement village and the Owhiro Creek reserve.

Access had always been the sticking point, but the developer had reached an agreement with a property owner on Hagart Alexander Dr and, should the subdivision be approved, that house would be removed and an entrance to the site created opposite Beech St.

Permission had not yet been gained from property owners on either side of that house and a limited notification process had started, with submissions closing in two weeks.

When contacted yesterday, the property owners did not want to comment at this stage.

Once submissions were in, there could be talks on mitigating effects on any opposing submitters.

Mr Bowen said it was hoped a resolution could be reached with any opposing submitters, meaning a hearing by a Dunedin City Council committee, tentatively scheduled for November 28, would not be required.

''Given it has been residential 1 for so long, we sort of feel council should be able to make it developable by giving consent.''

The plan was to develop the about 700sq m sections in stages, and the developer was seeking consent to do the work over 10 years.

Mosgiel Taieri Community Board deputy chairman Mark Willis said another subdivision was ''certainly welcome'' in Mosgiel, so long as it was done in a sustainable manner and infrastructure that could cope with the new influx was also put in place.

New subdivisions created opportunities for Mosgiel business owners and bolstered local schools, churches and other community groups as well as community projects such as the new pool.

''As a town grows it becomes a magnet for more people and businesses. It's good for everybody.''

Mosgiel had a real opportunity to become an enviable satellite centre for Dunedin and should embrace that, he said.