Act on your dreams, director says

Director and explorer James Cameron (left) leads a talk at the Hutton Theatre yesterday with Dunedin Mayor Aaron Hawkins. PHOTOS: GREGOR RICHARDSON
It was a small journey for James Cameron to get to Dunedin, but a trip that brought back fond memories of bigger explorations.

The director and explorer travelled from Wellington for the first time on Saturday to visit his "Challenging the Deep'' exhibit at the Otago Museum, based on some of his career exploring and directing films.

Looking around the exhibit gave him flashbacks from the past, he said.

Some of the sketches on display were completed by a 14-year-old Cameron.

"Looking around the exhibit, I would say: make sure you act on your dreams.

"I went from being very aspirational, thinking I might want to be a deep-sea explorer, to methodically making it happen.''

Hearing the Dunedin exhibit had been well-attended showed people had a fascination with deep-sea exploration, he said.

Dunedin provided a strong base for the exhibition due to the Otago Museum and strong marine research programmes in the area.

"I want to get more people interested in deep-ocean biology, deep-ocean geology - these things are fascinating to me.

Cameron talks about his exhibition at the Otago Museum.
"You can sail to your heart's content around the world but you can't see what's down there.''

Cameron, who owns farms in the Wairarapa region, knew within two weeks of being in New Zealand that he wanted to live in the country.

The director first came to New Zealand in 1994, delayed while attempting to go to the South Pole, and said New Zealand brought back childhood memories.

"The landscape looked very inviting to me, having grown up in Southern Ontario.

"I loved the rolling hills and farmland - except we don't have the beautiful mountains framing it all.''

The calibre of New Zealand people sealed the deal for Mr Cameron. 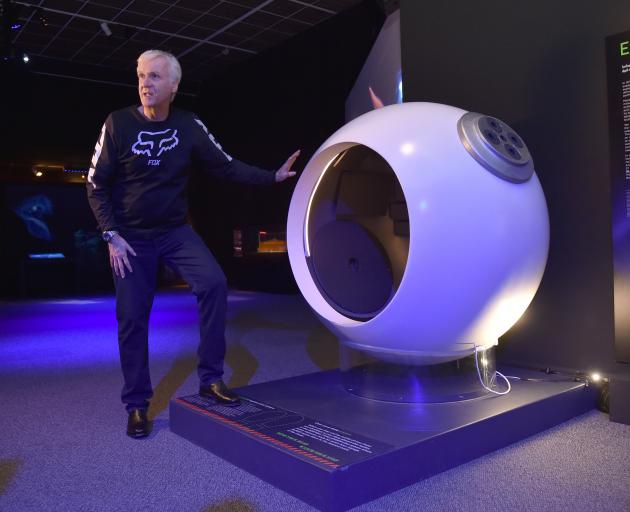 Cameron talks about the cramped conditions inside one of his exploration submersibles.
"There was a matter-of-factness, a pragmatism, but also a welcoming quality.

"I made myself a promise I was going to live here someday, and now I do.''

Mr Cameron said Dunedin, and the rest of New Zealand, had the potential to be a strong international voice for sustainability at a time of increased ecological crises and climate change.

But people needed to ensure they turned words into action, he said.

"The fact that New Zealand is acting at the city level, at the province level and at the national level is impressive and it's important.''