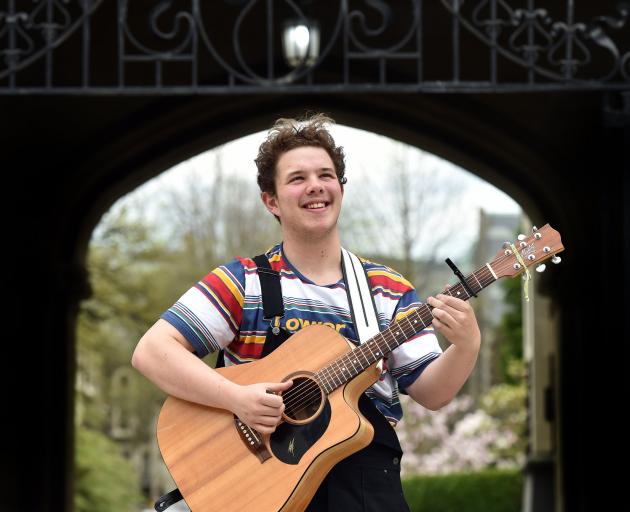 University of Otago singer-songwriter Alex Dykes is about to release his first single about the binge-drinking culture among Otago and Southland’s youth. PHOTO: PETER MCINTOSH
The chorus line is: "You took it too far again, I swear this happens every weekend; you sleep on the floor, instead of the mattress on your bed."

Alex Dykes is only 19 years old, but already the singer-songwriter has seen the damage alcohol can do.

"I’ve seen some real tragedies play out in real life — I’ve seen a lot of people get hurt."

The Central Southland-raised University of Otago politics student said most young people were responsible in their alcohol consumption, but there was still a worrying binge-drinking culture among Otago and Southland’s youth.

It is an issue he has used as inspiration for his debut single, The Alcoholics’ Waltz, which is to be released on Spotify on Friday.

"It’s a song about a relationship that goes wrong, and it’s alcohol and excessive drinking that has caused the problems.

"It’s not preachy or anything. It’s a pretty little song, written in waltz timing, about being in love with someone who is more in love with the bottle than they are with you.

"Its chorus really packs a punch, and even if it just makes one person rethink the way they approach alcohol, then it’s been effective."

Mr Dykes said he had been performing and writing music since primary school, but it was not until he won the solo vocalist award at the 2017 Southland RockQuest that he gained the confidence to pursue music seriously.

"Since I’ve been in Dunedin, I’ve met a lot of great musos and enjoyed the music scene that’s happening up here.

"It’s spurred me on to experiment more and develop my own style of music."

The Alcoholics’ Waltz was part of his recently completed debut album The Dunedin Study, which included songs based around student life and his two years at the University of Otago.

He hoped to release it independently this summer.

"It’s an exciting time, and it just shows that a bit of persistence, positivity and honesty can get you a long way."