To Alex, words are alpha, you bet 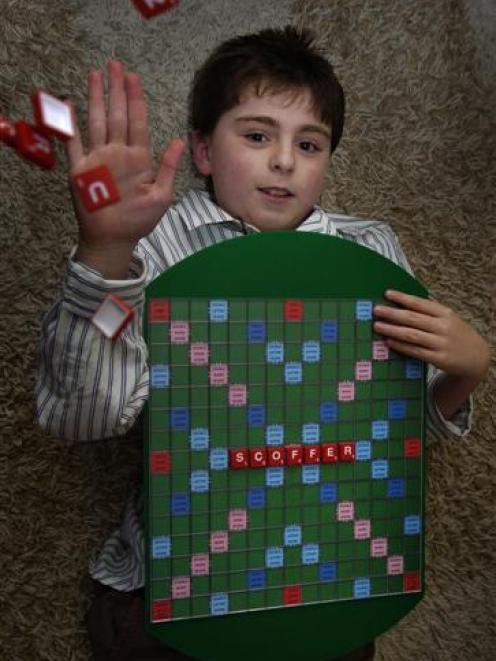 Alex Leckie-Zaharic, of Dunedin, shows off the word which won him the highest score in an award at the New Zealand National Scrabble Tournament in Wellington during the weekend. Photo by Jane Dawber.
Anyone who meets Alex Leckie-Zaharic probably walks away with a new word in their vocabulary.

The 10-year-old Scrabble whizz, of Dunedin, thrives on learning new words, especially those which will leave his opponents bamboozled.

He spent the weekend pitting his skills against other players at the New Zealand National Scrabble Tournament in Wellington and came home with three awards.

Alex was the first person under the age of 10 to compete in the event, which attracted 80 players; and was the youngest there by about 30 years.

He received awards for the most improved performance, the highest game score overall in his grade, and the highest score in a single turn (116 points for the word "scoffer" on a triple word score).

Overall, he won eight of his 15 games and was placed sixth in his grade.

To top it off, he will travel to Malaysia in December as the first New Zealand representative at the World Youth Scrabble Championship - not bad for someone who only started playing competitively in August last year.

His mother, Tracie Leckie, said he got his first Scrabble board when he was about 7, and while his skill and passion were "a novelty" in New Zealand, they were not worldwide.

"We've been told that in Thailand, Scrabble is compulsory at school," she said.

She was proud of his achievements and always knew he had a way with words.

"He started reading when he was 18 months old, so he always loved words."

His family was fundraising towards the $5000 cost of the event and Alex knew he would have to increase his training, including more online games.

"I just like it that you use lots of words," he said.