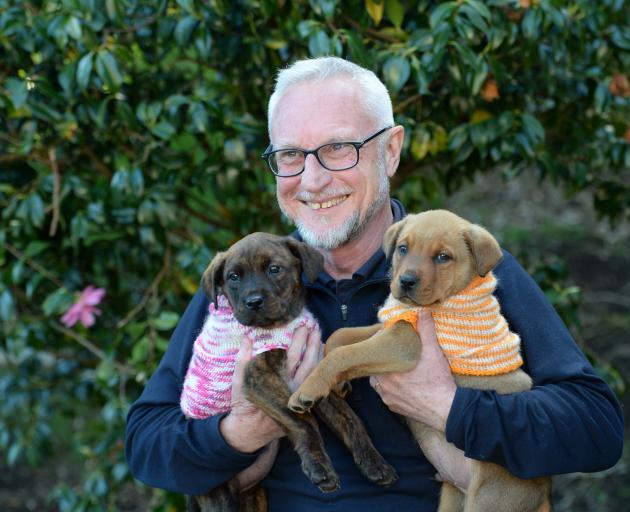 Bella (left) and Bentley, staffie cross puppies aged 10 weeks, show their appreciation to Jeff Herkt, director of animal welfare, at the SPCA centre in Dunedin this week. Photo: Linda Robertson
Dogs are meant to be ''man's best friend'' but that often does not seem to work both ways.

But Jeff Herkt, director of animal welfare with SPCA in Dunedin, said it was ''a bit of a toss-up'' whether dogs or cats came top of the animal welfare complaints list in Otago.

That's because a person might have several cats while most dog owners have only one dog.''

It could be people moving away and not taking their cats, or it might be a case of not bothering to get veterinary treatment for older cats.

With dogs, most complaints related to neglect, being left tied up too long or not being provided with appropriate food, water and shelter.

''Cases of out-and-out intentional cruelty are quite low.

''People don't understand their obligations under the Animal Welfare Act so a lot of our work is about education,'' Mr Herkt said.

Not every case was prosecuted.

People were very often warned and made aware of their obligations as pet owners.

He was unsure why there were more complaints.

There were some vexatious complaints - ''enough to be annoying'' - which were a waste of SPCA time and resources, but they had to be investigated.

SPCA chief executive Andrea Midgen said the much higher number of welfare complaints about dogs, nationwide, could be because dogs tended to be more visible, being more insistent in their behaviour, wanting affection and attention.

With annual running costs of $42 million, the SPCA hopes New Zealanders will help raise at least $150,000 by taking part in a 385,500km fundraiser - the distance from the earth to the moon - called ''Walk Your Dog to the Moon''.