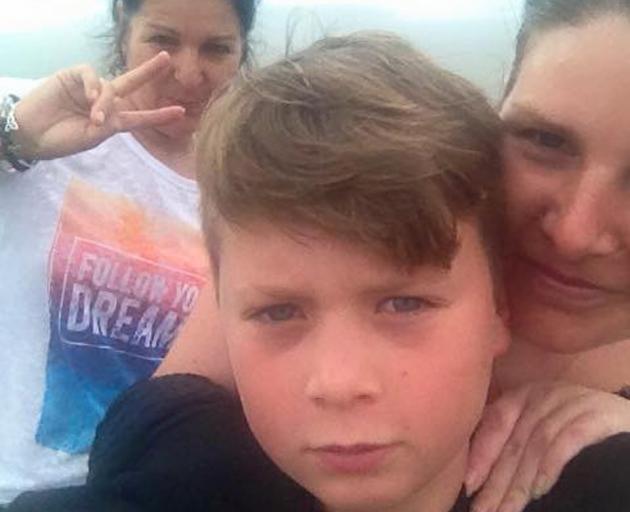 The late Vinnie Beecroft (centre) with his mother Michaela Beecroft (right) and relative Kathy Peters. Photo: Supplied
Following the recovery of Vinnie Beecroft’s body off the coast of Dunedin at the weekend, the community is rallying around the 14-year-old’s disabled mother, Michaela.

Vinnie went missing last Thursday after he jumped into the water from a cliff at Second Beach and did not return to shore.

His body was found by searchers on Sunday.

For Ms Beecroft, it was another cruel blow in her already traumatic life.

Her relative, legal power of attorney and property manager Kathy Peters said Ms Beecroft was in a serious car crash near Christchurch six years ago, which left her critically injured and on life support.

When the medical team suggested that all life support be ended, her small family persuaded doctors to put the decision on hold, and she made an extraordinary recovery.

Ms Beecroft now lives with a traumatic brain injury which has left her legally blind.

It was not the first time she had suffered major anguish.

When she was a child, her mother Karen Beecroft died, aged 39, of breast cancer.

He had been diving when he suffered a cerebral haemorrhage.

He was on life support until 15-year-old Michaela made the difficult decision to turn it off and donate her father’s organs.

It was a devastating time for her and her brother, Ms Peters said.

‘‘The family played together and the sea was a big part of their life. The family simply did everything together and led a life balanced by hard work and making the most of their time together.’’

Over the years, the children were separated and lived in different households. Eventually, they lost contact, she said.

‘‘They floundered in their grief and went through life very much alone, struggling to make sense of their loss.’’

It was not until Ms Beecroft gave birth to Vinnie in her early 20s that she found joy and hope again.

‘‘Her dedication as a mother and her struggles to provide for Vinnie were huge, but her strength, guts and determination gave her that fighting spirit that we all knew she needed to survive after the car accident.

‘‘Michaela has been able to be at home with the help of support workers, and Vinnie was her reason for living after the accident.

‘‘The ability, as humans, to be taken to the lowest point of heartbreak and tragedy but survive and still have hope, is the story behind this courageous woman.’’

Ms Peters said Ms Beecroft was once ‘‘fiercely independent’’, but now required support to go out alone or do some everyday tasks.

A Givealittle page has been set up for Ms Beecroft to pay any costs incurred with the loss of Vinnie, and to assist her or those in need.