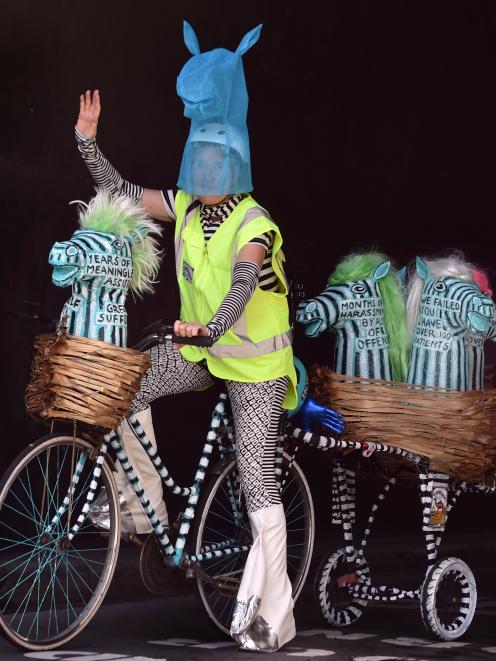 To protest about her experience in the mental health system, Dunedin artist Elizabeth Manson will cycle around the new Dunedin Hospital site each day during the Dunedin Fringe Festival 2021. PHOTO: PETER MCINTOSH
A colourful horse cycling around the new Dunedin Hospital site is a sure sign that the Dunedin Fringe Festival 2021 is under way.

Dunedin artist Elizabeth Manson was underneath the blue horse head made of mesh, and while her show could have appeared lighthearted, she was protesting to drive home an important message.

No Show4 The Cameltoe No Show will have Ms Mason cycling around the hospital site in the bike lane for two hours every day of the 10-day festival.

She aims to shed light on her personal experience within the mental health system.

The cycling represented her experience of "going around in circles" and doing something that may be considered "crazy" represented the stigma around mental health, she said.

Early on, she was diagnosed as dependent on the health system, she said.

"When I asked for help that was seen as a symptom.

Eight years later, she received an apology from a community mental health centre, a letter that has featured in her previous three Fringe shows.

"Will it make a difference, or will I just get cameltoe?" she said.