Maggie Covell with one of her works. Photo: Peter McIntosh
A public art project in Dunedin themed around mental health has been vandalised.

The Hidden in Plain Sight project, made by Dunedin School of Art masters student Maggie Covell, was installed in various public spaces throughout the city last week.

The project focuses on topics such as mental health and bodily autonomy.

Ms Covell said she wanted to help other people who identify as female to express their feelings about their mental health and trauma experiences through social art practice.

The billboards installed outside the Otago Museum Reserve were thrown into a pile and stomped on last night. 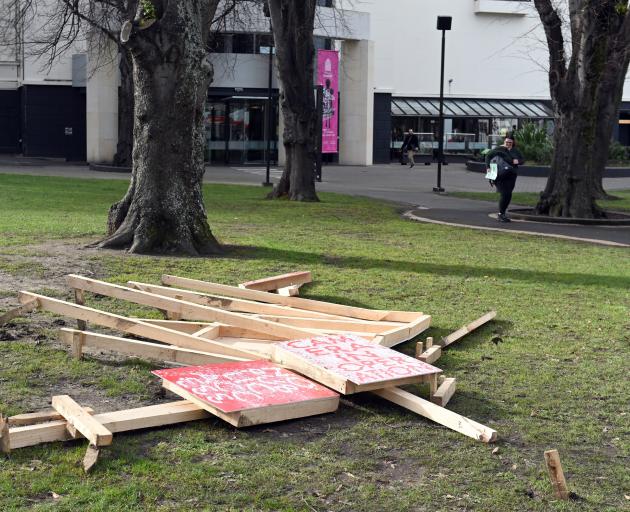 Billboards at the Otago Museum Reserve were damaged. Photo: Linda Robertson
Ms Covell said the vandalism was annoying, but she did not believe the attack was malicious.

The installation did touch on some heavy themes, so it was possible that someone was offended or triggered by the artwork, but it was far more likely to be the work of drunk students, she said.

‘‘I was a student myself, I know how they behave.’’

The damage on the signs seemed opportunistic, rather than well thought-out, and only one site was damaged, she said.

Ms Covell did have to spend some time organising with her group of 10 team members to repair the damage, but overall was ‘‘not too phased.’’

However, she was upset that the vandalism might have stopped some people from enjoying the project and connecting to it on an emotional level.

The project had otherwise been quite successful, with more than 500 views on her website from people who followed the QR code on the billboards.