Needless heartache . . . Jean Hamilton lost her husband, Maurice, to mesothelioma, but the pain caused by asbestos is set to continue across New Zealand. PHOTO: CRAIG BAXTER

From miracle mineral to silent killer, asbestos has left behind a toxic legacy of death and disease in New Zealand. In the first of a three-part series, Chris Morris counts the human cost.

Jean Hamilton's eyes fill with tears as she sifts through a box of memories.

Sitting in the lounge of her Southland farmhouse, she selects pictures of her late husband, Maurice, and tells stories of happier times enjoying overseas travel, family weddings and dancing.

But she recoils as she picks up a more recent photo, shaking her head at the vision of her husband.

He leans on a walking stick, his his clothes hanging loose from a body racked by mesothelioma.

Months later, Mr Hamilton would be dead - his life claimed at 62 years of age by asbestos fibres he never saw coming.

His death added another grim statistic to the toll taken by asbestos since its use began in earnest in New Zealand in the 1940s.

The fibrous mineral, imported for use in homes and buildings across the country for half a century, was now blamed for 170 deaths each year, making it New Zealand's leading occupational killer.

The deaths have come in waves, from the asbestos miners slowly suffocated by lung-scarring asbestosis, to the unsuspecting tradesmen who cut into asbestos products for a living, only to have their own lives chopped short by mesothelioma and lung cancer.

In the South, as elsewhere, the death toll has continued to climb, with 103 cases of mesothelioma in Otago and Southland since 2005 and no signs of it relenting, Ministry of Health figures showed.

A study by Auckland researchers in 2000 estimated 12,000 people might eventually die from asbestos-related illness, with a peak that was expected to be reached by 2015.

But the most recent WorkSafe data painted an even grimmer picture - the figures are now expected to get worse before they get better, with deaths not expected to peak for another decade or two.

That meant more heartache for families such as that of Mrs Hamilton, who said her husband's death had left a ‘‘huge'' hole.

The hurt was exacerbated by the uncertainty surrounding the exact cause of Mr Hamilton's death.

The couple met in 1979 when Mr Hamilton, then a traffic officer, was sent to Gore High School to teach road rules to pupils.

Mrs Hamilton, fresh out of teachers college, was teaching at the school, and the pair were soon an item, marrying in 1983.

They bought and farmed a block of land at Otama, near Gore, while working at the high school over the years to come.

But by then the die may already have been cast.

Mr Hamilton, who never smoked and was never a tradesmen, had worked at the former Gore Main School as a speech therapist before meeting Mrs Hamilton.

While there, he believed he had been exposed to asbestos dust as sections of the school next to his clinic were demolished in the 1970s, Mrs Hamilton said.‘‘The school was quite old and it was torn down, bit by bit - the whole school.‘‘He was living in dust for weeks - he and everyone else, of course.''Later, after leaving the clinic and becoming a traffic officer, Mr Hamilton joined Gore High School as its music teacher, where he was again exposed to demolition dust.

It was not until years later, with a persistent cough, chest tightness and struggling to breathe, that Mr Hamilton went to his doctor.

At first, his condition was put down to adult-onset asthma, and he was handed an inhaler.

It was only later, in March 2014, he was finally given a chest X-ray that revealed the terrible reality.‘‘His lungs were full of fluid.

‘‘The doctor said it was probably cancer. We were in a very dark place there for a while, and then it got even darker.

‘‘They took a biopsy and found the fibres, the asbestos fibres, and that was the beginning of the end.''

The prognosis was bleak - the family were told Mr Hamilton had mesothelioma, which worked quickly, and he was unlikely to make it to Christmas.

But with the help of chemotherapy, steroids and a refusal to sit still or despair, Mr Hamilton battled on for almost two years, including a trip to Europe, where the couple visited 13 countries in 27 days.

On the way home, they stopped at a world-leading cancer clinic in Houston, Texas, hoping for a miracle cure.

But without United States health insurance, the enormous bill would have required Mr Hamilton to mortgage the family farm, something he refused to do.

The farm, which the couple had grown to more than 160ha by purchasing neighbouring properties, was his legacy to his family, she said.‘‘He said he had worked all his life for it and it was his pride and joy, and he said no.‘‘It was more important to leave the farm to us,'' Mrs Hamilton said, tears rolling down her cheek.

Instead, Mr Hamilton spent his last months getting things ready - chopping firewood against doctor's orders, and writing notes around the house to help his wife after he was gone.

He entered hospice care, but survived long enough to enjoy a family wedding on January 7 this year, and stood proudly for photographs.‘‘We even had a dance,'' Mrs Hamilton said.

But as the steroids wore off, he faded away, dying on January 31.

Sadly, for all the lessons learnt since the dark days of asbestos ignorance, his death would not be the last.

David Skegg, a cancer epidemiologist from the University of Otago, said that reflected New Zealand's failure to respond quickly enough to the health consequences of asbestos.

Whereas the United Kingdom first regulated asbestos in 1931, New Zealand did not follow suit until 1978 and did not ban imports of raw asbestos until 1984.

And while 57 countries had also long since banned the importation of asbestos-containing building materials, including Australia in 2003, New Zealand only confirmed its ban on Wednesday.

Tougher health and safety requirements for asbestos had also been introduced in April, but the slow reaction had still cost too many lives.

Shoddy practices by some tradesmen meant they were still at risk of being exposed, even now, as were do-it-yourself home renovators unaware of the risks still lurking in their homes.

‘‘New Zealand has been slow - in my opinion shamelessly slow - to deal with the health consequences of asbestos,'' Prof Skegg said.

‘‘Until the very recent past, you'd have to say that the challenge of asbestos was largely ignored in New Zealand. And that's why we're in the situation we are now.''

It also helped explain why New Zealand's rate of mesothelioma was not ‘‘dramatically lower'' than in Australia, despite Australia being a much larger country with a much bigger asbestos problem, he said.

‘‘It's much more similar than I would have expected. That suggests to me that Australia was much quicker at recognising the risk to workers and taking precautions.

‘‘I think, it's sad to say, it's been typical of the attitude to occupational health and safety over decades,'' he said.

The death toll represented a dramatic fall from grace for asbestos, which once had been considered ‘‘a miracle mineral'' because of its strength, pliability, insulating and fire-resistant properties, Prof Skegg said. 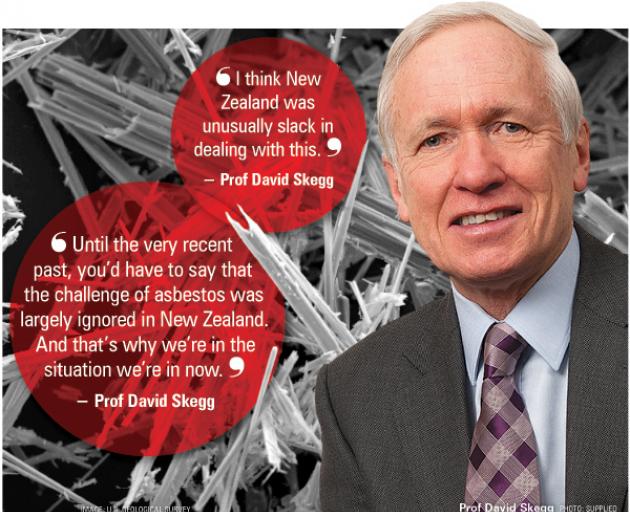 But, after years spent ignoring the risks, it was important not to overstate them now, Prof Skegg believed.

Imports of raw asbestos began in the late 1930s, peaking at 12,500 tonnes a year in the 1970s. Asbestos products were used in homes and buildings across New Zealand for more than half a century.

That made it ‘‘ubiquitous'' in homes built or altered between 1940 and 1990, or commercial buildings between 1940 and 2000, being found in everything from roofing materials and wall claddings to vinyl floors or insulation.

Asbestos in its natural state came in a bundle of fibres and a variety of forms, including white (chrysotile), blue (crocidolite) and brown (amosite) asbestos.

Each had a different pattern of fibres when under a microscope - wrapped in a spiral, or straight and needle-like - making some more hazardous than others, although all were considered a cancer threat.

Blue and brown asbestos were considered the most dangerous, especially when ‘‘friable'' - able to be easily crumbled in the hand - compared with non-friable asbestos, such as when safely encased in concrete.

They remained safe while in good condition and not disturbed, but could be harmful if exposed or damaged - be it by a tradesman's Skilsaw, a homeowner's power sander, or just weather and time.

It was when the asbestos bundles began to unravel that the threat emerged - contaminating the surroundings, or, if kicked up into a cloud, leaving microscopic fibres to be inhaled by unsuspecting victims.

Once inside the body, fibres could cling to the lung and, over decades, cause lung tissue to thicken, making breathing more laboured and painful.

That led to asbestosis, while cell damage could also lead to a variety of cancers, including asbestos-related lung cancer, or malignant mesothelioma decades later.

Prof Skegg said the good news was there was now ‘‘zero'' chance of new cases of asbestosis, which required heavy, prolonged exposure associated with the mining or handling of raw asbestos - practices which had ceased in New Zealand.

However, the ‘‘second wave'' of deaths from mesothelioma and asbestos-related lung cancer was continuing along with the bad practices of some tradesmen, who remained most at risk, he said.

It could be difficult to sift through the complex causes of lung cancer and single out asbestos exposure as the cause, particularly when cigarette smoking was known to exacerbate the risks by up to 84%, he said.

But mesothelioma, which was also commonly linked with higher doses of asbestos fibres, could also occur after ‘‘very low'' levels of exposure, he said. That was why wives who washed their husband's overalls had been known to die from the disease in the past, he said.

A smaller ‘‘third wave'' of death from mesothelioma from non-occupational causes, including DIY exposure fuelled by ignorance of asbestos in the home, was continuing to add to the grim statistics, he said.

Despite that, people had little to fear from the background level of asbestos present in the everyday environment, which came from old buildings, car brake pads and other sources, Prof Skegg said.

Occasional low-level exposure would rank well down the list of public health issues, even for those people who found themselves working in buildings containing asbestos products, as long as the materials were looked after, he said.

Instead, the focus should be on managing asbestos' toxic legacy and preparing the next generation of tradesmen to understand the risks, he said.