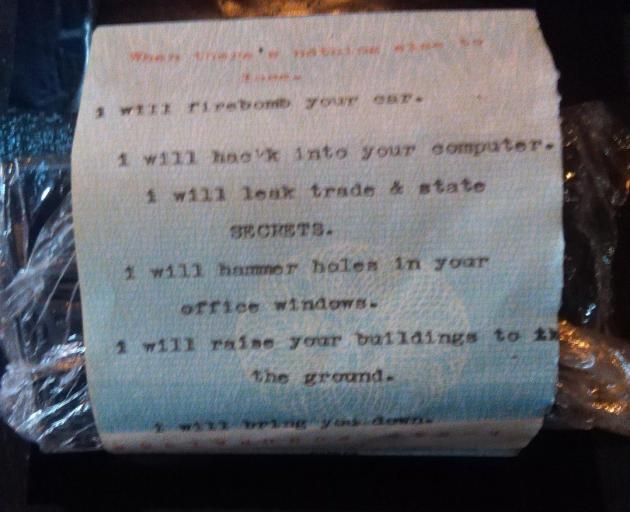 A post from LSD Fundraiser's Bandcamp page shows a note which was attached to a demo tape of the band's album and fixed to walls in Dunedin. Photo: Supplied
The suspicious package which sparked the closure of much of Dunedin's CBD on Friday due to bomb fears was a demo tape from a Dunedin noise band.

Police are providing few details on the package and accompanying note which were found stuck to a former strip club in Moray Pl about 12.40pm on Friday.

However, detectives yesterday confirmed the man spoken to in relation to the incident ''claimed'' to be from a band and the item was related to the musical endeavour.

It is understood the band was underground Dunedin noise band LSD Fundraiser.

On the band's Bandcamp page the release of a demo tape - dubbed ''Streetnoise'' - was announced on June 1.

An image of the demo tape shows it was wrapped and had a note taped to it which reads:

''When there's nothing left to lose.

''i will firebomb your car.

''i will hack into your computer.

''i will leak trade & state

''i will hammer holes in your office windows.

''i will raise [sic] your buildings to

The announcement, and a post on social media, said the limited run of tapes would be coming to ''a wall near you''.

When asked about the note, police would not be drawn on its contents, instead issuing a statement.

''Police can confirm that the person spoken to over the weekend claimed they were a member of a Dunedin band and the item left behind related to that band,'' Detective Senior Sergeant Rob Hanna said.

''A search warrant was executed on Friday evening at an address in Dunedin but the AOS were not involved.

''As the matter is still an active investigation the police won't be commenting on the content of the note attached to the item at this stage.''

Much of the central city had been evacuated and cordoned off for hours on Friday as police assessed the threat.

The New Zealand Defence Force's explosive ordnance disposal squad was flown by helicopter to the city and destroyed the package in a controlled explosion carried out by a remote-controlled robot shortly after 5pm.

Police confirmed earlier this week they were assessing the criminal liability of the man involved.

When pressed for further details yesterday, police said they would not be commenting further until the investigation was complete.

Attempts to contact the Dunedin man behind the band were unsuccessful yesterday.