Bayfield burgers up there with the best 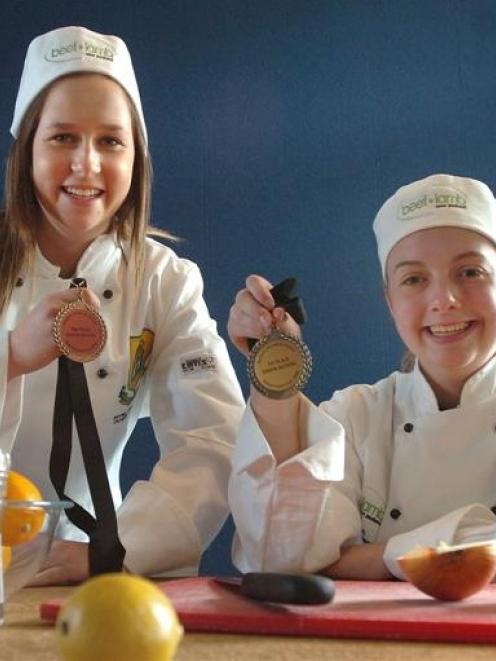 Bayfield High School food technology pupils Catherine Stringer (16), left, and Rebecca Peace (14) back at school after their success at the 2008 national secondary school burger competition in Auckland. Photo by Peter McIntosh.
"I like giving traditional Kiwi meals my own twist. I like the creative side of cooking - I can make things just the way I like it."

It is an outlook which inspired Bayfield High School pupil Rebecca Peace to come up with the Turkish Temptation - a burger featuring the fresh, zingy flavours of Turkish cuisine - which won the junior category of the 2008 National Secondary School Burger Competition in Auckland last week.

The 14-year-old said her experiments in the kitchen had received mixed reviews from family members in the past, and her recent batch of broccoli muffins was no exception.

"My mum and nana liked them, but everyone else in the house wouldn't go near them."

Rebecca said she was "stoked" to win the junior category of the competition.

She had worked hard in preparation for the contest and winning was "the icing on the cake".

"I was extremely nervous the night before. I didn't get any sleep. But once I was in the kitchen and everything was set out in front of me, I just blocked everyone else out and I went into the zone."

Rebecca was not the only Bayfield High School pupil to whisk up success at the competition.

Catherine Stringer (16) was third in the senior category.

"I'm extremely pleased, because I was up against some really strong competition. Some of the dishes they were making were quite original and inventive."

She said there were few points between the first three placings in the competition.

"The competition was very close - it all came down to minor details, like how warm the serving plates were."

Healthy Turkish ingredients featured in the winning lamb burgers in both the junior and senior sections of the hotly contested competition, held at the Manukau Institute of Technology.

The senior section was won by Ruby Scott-Smith (16) from Kaipara College, Helensille, with a burger including yoghurt, mint, chilli, garlic and cumin.

The competition required the six junior and six senior pupils to turn a base product of beef and lamb into an appetising burger, taking into account nutritional value, degree of cooking, flavour harmony and presentation.

"The competition demonstrates that burgers can be a healthy meal," judge Nikki Bezzant said.

Also judging was Mark Dronjak, from the Hospitality Standards Institute, and Hans Persterer, a tutor at the Manukau Institute of Technology.

This year's competition attracted more than 80 pupils from 60 schools nationwide.

The event is supported by a comprehensive resource kit, developed by two food technology teachers.

The kit encourages teachers to incorporate the burger development project into the school curriculum and provides activities and projects for pupils to undertake in the course of developing their burgers.

Despite their success in the competition, both Catherine and Rebecca said they had no plans to become chefs.

Catherine wants to study medicine and Rebecca plans to become a pilot in the Royal New Zealand Air Force.

"To be a professional chef would not be as enjoyable. I liked the relaxed atmosphere of cooking at home for family and friends more."

Both said they would continue to create culinary delights and to compete in the competition again next year.