Internationally respected physiotherapist Dr Stanley Paris has urged health professionals to place "the interests of your client and patient first", in business and professional life.

He was commenting in an address to more than 330 people who graduated from the University of Otago with qualifications in all disciplines in a ceremony at the Dunedin Town Hall at 3pm on Saturday. 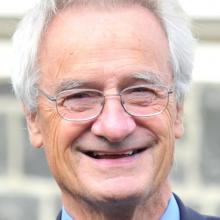 Dunedin-born Dr Paris is an award-winning Otago physiotherapy graduate, endurance athlete and solo yachtsman who has swum the English Channel.

The pioneer in manual and manipulative physiotherapy and noted philanthropist was awarded an honorary doctorate of laws at the town hall ceremony.

Dr Paris emigrated to the United States in 1966 and founded a successful private university, becoming founding president of the University of St Augustine for Health Sciences in Florida in 1975.

He urged students to be entrepreneurial and not to fear failure, because "fear of failure is the most strangulating of all life experiences".

"Don’t be frightened of crossing the road, taking further exams or investing financially in a business or real estate opportunity or speculation," he said.

Failure through a life of mediocrity was a "sad waste of talent and potential— a potential that this university has helped to provide you with".

"I have been a risk-taker, propelled, I trust, not so much by money but rather the sense of being able to improve on what was.

Lucy Birks (centre, 22) from Morrinsville, graduating with a BA, reacts to friends lining the graduation parade route down George St on Saturday. Photo: Gregor Richardson.
"For me, that has been wellness and health science education."

He had championed the autonomy of the health science professions away from the well-intentioned but nonetheless often "restrictive medical profession".

He deplored the fact that most professionals did not join and "take part in the activities of their profession".

"I do earnestly believe that we have a responsibility to protect our professions, to strengthen their ethics, practices and effectiveness in delivering service, keeping the public whom we serve forefront in all our actions."

New Zealand was "modern, competitive, enterprising and a leader in technology, education, farming and, yes, wine".

He urged students to remain "vigilant in defending what we have" and to protect the country against "those that would limit enterprise".