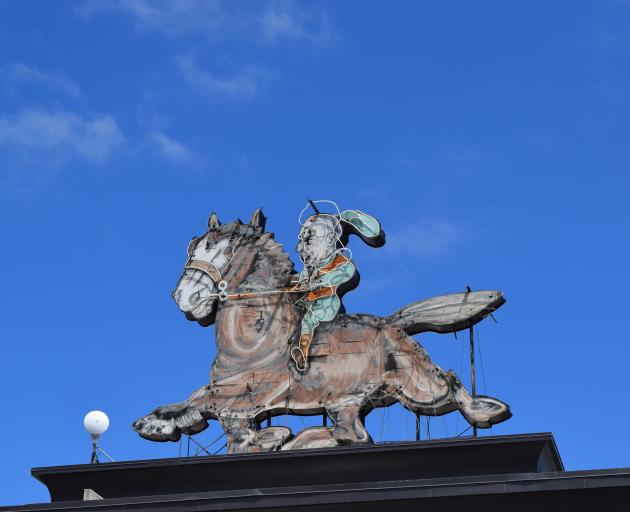 A static electric sign of a horse and rider was installed on department store Arthur Barnett, in George St, in 1930.

The neon sign, nicknamed "Can't Stop", on top of Meridian mall stopped glowing and galloping in 2016.

Mall centre manager Regan Bennett said the mall owned the sign and had hired consultants to investigate its condition to find out if it could be fixed.

He had worked at the mall for nearly two years and the investigation to restore the sign had been "boiling away in the background" throughout that time.

"It's something we don't want to rush - we want to get it right."

The ongoing investigation would explore "all options" and include discussions with the Dunedin City Council and Heritage New Zealand.

The investigation had not explored giving the sign to Toitu Otago Settlers Museum to refurbish it for display.

"We haven't gone down that track at the moment."

The consultants would focus on the logistics of keeping the sign on the mall roof.

"People from City Rise probably quite enjoy looking down on it."

Sustainability and energy efficiency would be considerations of the investigation, such as exploring the use of LED lighting to get the horse glowing and galloping again.

1935: The galloping horse-and-rider sign  becomes the first double-sided activated sign in New Zealand.
1959: The sign becomes a symbol of survival after remaining intact after a large fire in the store. The public pressures the Dunedin City Council to allow the sign to remain in operation above the charred ruins.
1976: The  sign is  refurbished with 182m of electrical cable and 1200 electrodes.
1977: The refurbished sign is returned to its original position.
1987: Two students are charged with unruly behaviour for sitting astride the sign.
Mid 1990s: During the building of Meridian mall, the council insists the sign be incorporated into the new building. The sign is removed for refurbishment.
1997: The refurbished sign is put back near its original spot. The clock, with newly fitted electronics, is moved from the George St frontage to Hanover St.
2016: The sign stops glowing.
Source: One Hundred Years of Loyalty. The Story of Arthur Barnett Ltd — 1903-2003

As a youngster i usually accompanied Mum on her Friday nite shopping "uptown". Watching the Arthur Barnett sign was – literally – a highlight for me.