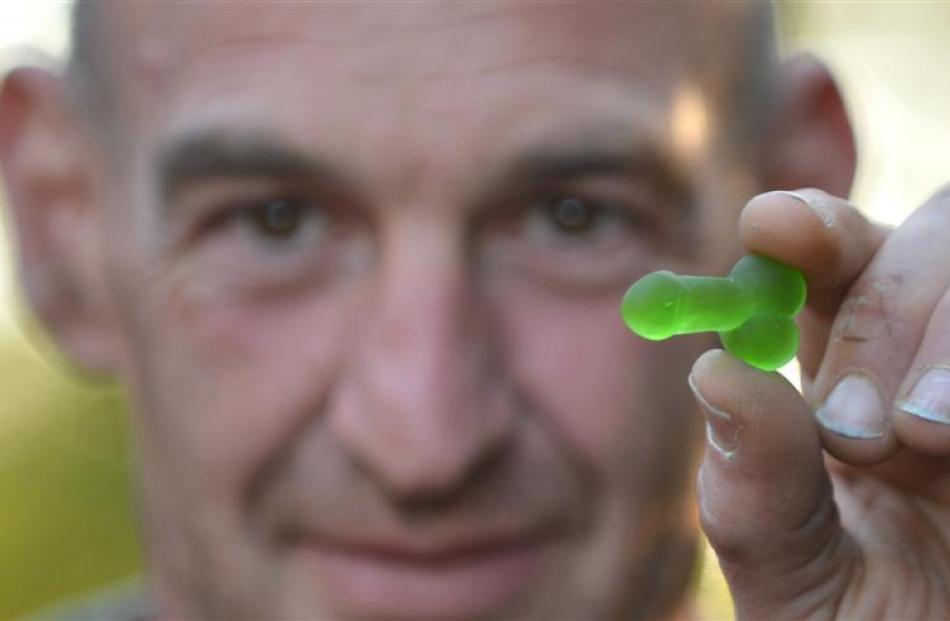 Barrie Aburn, of Dunedin, holds one of the offending lollies in Dunedin yesterday. Photo by Peter McIntosh.

Inappropriately shaped lollies on sale exclusively in the South have been branded offensive and recalled from shops.

Barrie Aburn, of Dunedin, said his daughters Cadence (8), Rhianna (6) and Payton (5) bought a bag of Dragon Sweets from Moyles SuperValue in Green Island and gave it to him for his birthday.

Mr Aburn's partner, Jacqui Hawkins, said she randomly took a sweet from the bag and found it was shaped in the form of male genitals.

Another lolly in the bag was a gummy baby with a penis, she said.

''I don't find anything amusing about it at all. I find it disgusting,'' she said.

The lollies were distributed to shops in the lower South Island.

He was unaware ''inappropriate'' lollies were inside the bags.

''You have to look at it two or three times to think that doesn't look right.''

The offensive lolly was a gummy bear, and not a gummy baby, he said.

The lollies were a ''one-off'' and he had recalled and dumped thousands of bags.

Mr Van de Geest said he had imported lollies from around the world for 25 years and an offensive lolly had never been included in a mix before.

The manufacturers had sent him a letter apologising for the mistake and had refunded some money.

The lollies were originally designed for sale in England and were not considered offensive in Asia.

In Asia, the shape was considered a sign of fertility and health, he said.

''They wouldn't even blink an eyelid. We see it as offensive. We don't mind a hand or a foot being part of a lolly but we object to a breast or a penis.''

He had apologised to Mr Aburn and offered him some ''appropriate'' lollies for free.

Moyles Supervalue Supermarket owner John Moyle said he had not received any complaints from customers about the lollies.